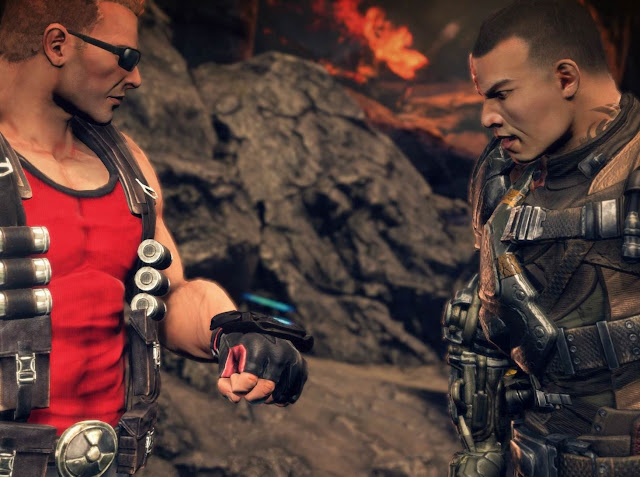 I remember way back in 2013 when the PlayStation 4 was announced. I was excited, not only because of the negativity surrounding the Xbox One at the time (that Sony totally took advantage of), but also because of the promise of great new games being released on the console. What I never expected back then was to be playing what seems to be the 200th re-mastered PlayStation 3 game for the console, this deep into the console’s life.

Some of those remasters have been worth the upgrade. Games like Tomb Raider, The Last of Us, the Metro games and Kingdom Hearts are all worth revisiting, whether because they added new content to experience, gave players an opportunity to visit something that may not have sold well originally, or just because it runs much better with the additional power. In the case of Bulletstorm: Full Clip Edition, it’s somewhat of a mixed bag.

The original release was one that I believe was not seen by many for what it is. As a complete satire of AAA First Person Shooters, it took the tropes of games like Call of Duty and Killzone, and made them completely bonkers. By taking this approach, Bulletstorm was able to do what so many other games have failed to achieve, and actually do something different with the genre.


The game follows the exploits of a man named Gray, an alcoholic mercenary looking for revenge on a man who betrayed him and his crew. Gray often only thinks of himself in most situations, but tries to do right by his crew. For the most part, the game is so very over the top in its delivery. It’s not the funniest game out there by any stretch, but looking beyond the dialogue and narrative shows how the game takes subtle jabs at AAA titles. Towards the end, the game takes a serious tone and turns into the type of game it was originally parodying. I’m not sure why Bulletstorm does this, as I’m quite certain that it isn’t an attempt by the game to become meta.

Even so, the gunplay remains over the top throughout the whole game. Being rewarded for killing people in creative ways is an interesting concept. It feels almost Mortal Kombat-esque in that it goes beyond gore for the sake of gore and actually reward people for the bloodletting. The ragdoll physics mean that every kill looks unique, rather than replaying the same tired animation over and over again. Booting someone into electrical wires gives a “shocker” bonus, while shooting someone directly in the butt gives a “rear entry” bonus. It’s completely crass in the way that it’s delivered, but the way in which every bonus is listed in an achievement-like system lends credibility to the idea that it’s all satirical. The points earned by scoring the bonuses allows the player to give Gray weapon upgrades and abilities. Collecting new weapons means that Gray has access to even more skill shots, so it keeps things fresh and interesting.

Another element unique to Bulletstorm is an electric leash that Gray acquires early on in the game. With it, he can latch onto things in the environment, as well as grabbing people a-la Mortal Kombat’s Scorpion and pulling them towards himself. One of my favourite things to do was to leash someone towards me and then kick them away. When an enemy is sent flying through the air, time slows down too, giving some more opportunities at unique skill shots and really big points scores. 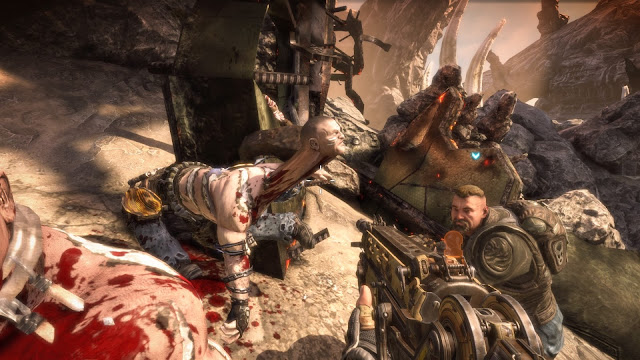 The levels themselves are only okay. For a game that starts out in space, the opportunity to create truly unique landscapes seems to have been missed. There is nothing really special that stands out about the environment, except that they look sharper and slightly prettier than its PlayStation 3 counterpart. There have been times where the physics have let down the enemy models, at one point a dead enemy’s neck was stretched out four times as long as it should have been because his head was stuck around the corner of a piece of scaffolding.

The Full Clip edition on the PlayStation 4 includes Duke Nukem as a bonus. His presence instantly means that this is all of a sudden a better Duke Nukem game than Duke Forever. The way that Duke Nukem was implemented in Bulletstorm is by merely replacing Gray in the main story. When people in the environment talk to Duke, they still call him Gray. But Duke’s still Duke, leading to some hilarious moments for the first couple of seconds of the game. Then it all gets dull. There’s only so many times in the campaign that I could handle Duke Nukem correcting people on his name, asking how he got there, and clumsy fourth wall breaking as he says he didn’t belong in a particular cut scene. They did record new dialogue with the same voice actor from Duke Nukem 3D, which is a nice touch, but overall, Duke Nukem and his misogynistic potty humour belongs back in the 1990s, as well as in the bin. There is just no way to make him relevant in 2017.

Thankfully for many people, Bulletstorm’s re-release is a chance to check out a title that wasn’t exactly a hit the first time around. It’s a cool little game that pokes fun at a lot of what is wrong with AAA First Person Shooters, and a lot of it is still relevant today. I’d just avoid playing through as Duke Nukem. His implementation may have been one of the big selling points of the game, but it is both sloppy and lazy with how he’s put in the game. Still, when taking Duke out of the picture, Bulletstorm is a pleasure to play.