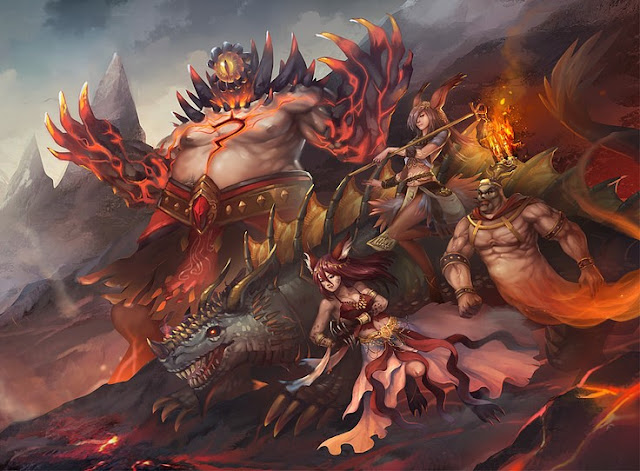 It’s no secret that I’m not the world’s biggest fan of MOBAs and other eSports-like games. It’s not to say that I don’t appreciate what they do, it’s just that they’ve never offered gameplay that hooks me in particularly well. I’ve tried the main ones – League of Legends, Smite, and even lesser ones like Guardians of Middle Earth. I’ve grown tired of them all quite quickly. For some reason though – and I’m not even sure exactly why – ArmaGallant: Decks of Destiny has really hooked me in. Objectively I know it’s not of a standard that makes it comparable to the greats of the genre.

Related reading: Matt doesn’t review too many MOBAs. Guardians of Middle Earth, back on the PS3, was the last one he did.

I know it’s relatively limited, is hardly what you could call a feast for the eyes or ears, and I know that it has no chance of fostering a large and sustainable community. But every time I turn on my PlayStation 4 I find myself playing at least one or two matches of this first. It’s really quite addictive.

ArmaGallant’s first real positive is that it’s a 1 v 1 experience. With no teammates to deal with, and no abusive language filling your ears as you play, ArmaGallant’s a clean and quite competitive experience, which I much (much) prefer. There are only two maps to play on, though the tactics on those two maps are different enough to make them feel substantially different to play on. There’s only one gameplay mode worth bothering with, aside from the practice mode against a very simple AI, and that’s ranked battles. In terms of raw presentation the game does feel like it’s only partway finished; even the menu music is badly compressed, which is hardly an inspirational start.

Gosh, that one wasn’t even close. I am invincible! #PS4share https://t.co/L6GHO3jCsl pic.twitter.com/ok21yycgTo

But the core mechanics of the game I find to be really interesting. Basically ArmaGallant is what would happen if you were to mix Hearthstone with League of Legends. Each player has a deck of cards and then, in real time, they need to summon monsters before sending them to capture key points and battle enemy units. As you’d expect, more powerful monsters have higher cost, and that is paid using mana, which regenerates at a set pace. You’ll need to decide if you really want to summon a unit of weaker enemies for a cost of 3 mana, hold on to that mana to cast a damaging spell on an enemy, or a healing spell on an ally. Or you might want to save up to summon a really powerful monster that costs 6 mana. Part of your strategy will be informed by what your opponent is doing, but it’s also important to look for synergies in your deck (which maxes out at 30 “cards”), and look for ways to build groups of monsters that complement one another.

For example, ranged units might cause an effect on an enemy unit that causes that unit to take more damage from melee units. In such a circumstance, a good strategy is to have a few cheap melee units supported by these ranged units, as the combined damage output works better than what one or two big units can achieve. There are enough cards in the game in its current state that there are a number of different strategies you can undertake. I can’t help but feel that there are some cards that are somewhat overpowered, but good use of spells and enchantments to boost your units and weaken theirs can often compensate.

The second side to the game is the strategy itself. Players need to reduce a health meter that their opponent has from 100 to 0. There are three ways to do this; the first is to kill enemy units, which will reduce their overall health by the cost of the unit (so losing a unit that costs 6 mana is more painful than just losing the firepower from the team). The second way is to occupy as many of three victory points scattered around the map as possible. One victory point will be close to your “base,” one will be in a central point on the battlefield, and the other will be in the opponent’s home “area”. Whoever controls more of these victory points will inflict regular damage on the opponent, to the tune of the difference in number of control points owned. So for example, if you control two points, and your opponent has one, then you’ll periodically cause one point of damage to that opponent. This system is effective in making sure both players are constantly moving their units around the map, and being able to strategically maneuver around to continue capturing key points as the opponent leaves them under-defended, indeed, a path to victory for me when my opponent has, on military strength, out-gunned me.

I still haven’t actually lost in this game. This was a come from behind win ^_^ #PS4share https://t.co/L6GHO3jCsl pic.twitter.com/fMFofQWs6Y

The final way to damage the opponent is that, very occasionally, something special will happen on the map. On one map an artifact will appear, and the first team to claim it does a lot of damage to the other. On another map a special, fourth control point will “turn on” for a short time, and whichever side controls that will do a lot of damage to the other over a period of seconds. As you can probably guess, when these events happen on the map, both sides tend to scramble for them, a lot of units die on both sides, and whichever side scrapes through on top is left with a massive advantage.

There are a couple of things I really appreciate about ArmaGallant. Most critically, come from behind wins are not just possible, they’re frequent There have been times where I’ve been almost completely outclassed (down to 30 health while my opponent’s sitting on 80), but after a purple patch in which I’m able to take control of some control points and snipe down a couple of units that weren’t being watched so closely, I would find myself with all the momentum. In my experience with other MOBAs, once a team gets a clear lead, the match generally becomes a grind until that team can finally claim victory.

I also really enjoy the range of units on offer. It would have been nicer if they were better represented on-screen, as all the characters become hard to make out when a large group of them are battling it out with the opponent, but I have my favourites nonetheless, and have even built decks around them.

So apparently I’ve found a MOBA I’m good at (and actually like). #PS4share https://t.co/L6GHO3jCsl pic.twitter.com/WWS9BWGWvw

Finally, I love the game’s pacing. Matches are generally over in ten or so minutes, and while I feel busy while I’m playing, I’m also never stressed, and I’m able to adopt a more deliberate approach to strategy in the game.

Related reading: And for a pure example of a digital card game, here’s Matt’s review of Hearthstone.

ArmaGallant is a budget production, and that means that it will likely not sustain the community that a game of its nature needs. I’m already finding myself queuing for ten minutes at time to get a match going, and that’s really disappointing, because this is one I could see myself playing for quite a while yet, given half the chance. It also helps that I am, to date, actually undefeated. Bring on a world championships and those eSports sponsorships, please, I want to turn pro at ArmaGallant.

Retro reflections: An ode to the PSP Go (and how awesome was Dead or Alive Paradise, folks?)