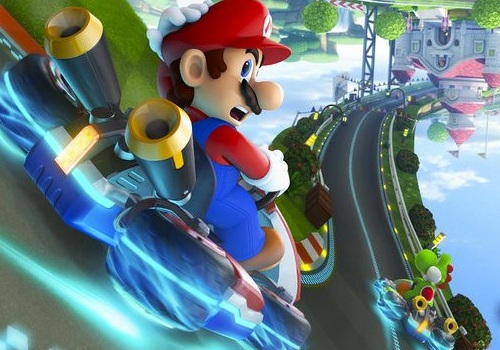 Modern Mario Kart games are a far cry from the original Super Mario Kart, which focused on adeptly manoeuvring through basic, well-designed tracks with twitch controls. Each sequel thereafter has distanced itself from the earlier titles with new items, new courses, and new mechanics designed to take the focus off the racing itself and perpetuate the notion that anything goes. Turn the series into a party game, in other words.
Mario Kart 8 is a rather fascinating case, though, as it makes some subtle strides towards balancing the increasingly frenzied races without actually removing the features that define the current modus operandi of the series. It lands flat on its face in several regards, but I’m intrigued to see where the franchise ventures next.
The game follows from its predecessor, the 3DS’ Mario Kart 7, by melding anti-gravity segments with the existing underwater and glider portions. As a result, it’s the most three dimensional entry in the series to date. Virtually every track is layered and intricate, incorporating all the aforementioned elements as well as innumerable shortcuts. One player might extend their glide time for as long as possible while another ventures into the depths of the ocean, despite both players racing in the same vicinity. It actually works better than I expected, since it distributes the players across the tracks more than usual and, at times, even allows for a player to dodge a weapon attack using something simple; good racing. The game also deserves a tonne of credit for featuring essentially 32 brand new tracks to work with. Half may be remakes, but they’re almost completely reworked so that they share the newer tracks’ focus on space. 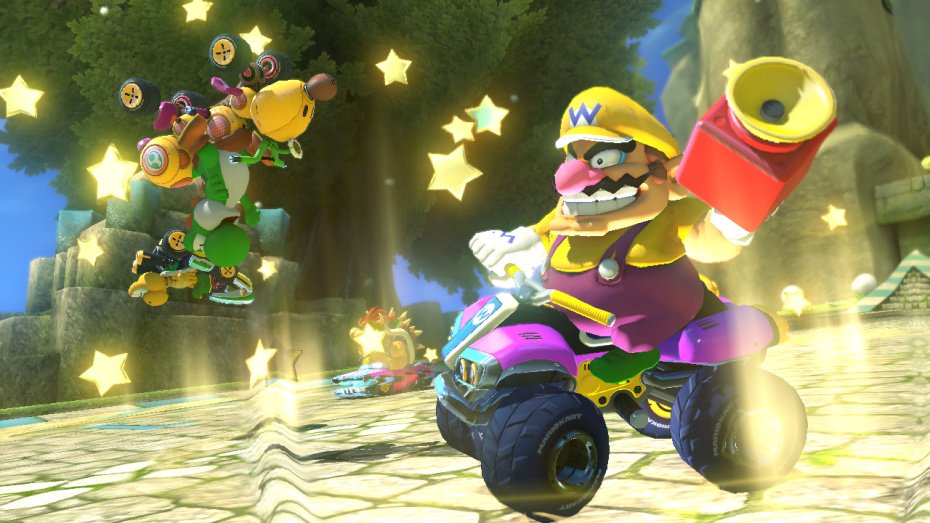 The consequence of this updated approach, though, is that most tracks go so all-out in catering to all these track features to the extent that they shed their personality and few truly stand out. Thematically speaking, these are largely stages we’ve seen before, and there’s less of a challenge or learning curve to navigating them when compared to any prior Mario Kart title. I’m struggling to recall a single instance when I crashed into an obstacle, ended up off-road, or had to engage in anything more intricate than drifting with some of the series’ easiest controls to date. I don’t begrudge Nintendo for designing a title with the noble intention that everyone can compete within it, but the safety nets are so prevalent that every course suffers in creativity, and this is not a game where I will spend dozens of hours learning how to master each track, as I did in the series heyday on the Nintendo 64 and DS.

I also take issue with the unbalanced items and the surplus of racers. Mario Kart Wii proved that twelve simultaneous players cannot hold a balanced competition when items are involved and that remains true here. Those in second to sixth place tend to get feeble items that can’t challenge the leader of the pack, which is fine; it grants the lead player a fighting chance at staying ahead using racing skill. The problem is that matches are so chaotic that the stuff going on among the players at the back of the pack mess up everyone’s game. Those in second to sixth, especially, suffer as they are condemned to a rat race while the rest of the pack clobbers them from behind with overpowered items that wear out before they can touch the winner. I appreciate that coins remain part of the Mario Kart lore as they encourage crafty driving by granting a small speed boost with each one held, but this too advantages the leader, who can swipe all the good coins and gain a further advantage. People often criticise Mario Kart for picking on the leader, what with rubber banding AI and those horrible blue shells. Well, in Mario Kart 8 it seems that Nintendo has been so keen to do away with that issue that suddenly everyone who isn’t in first is at the disadvantage. 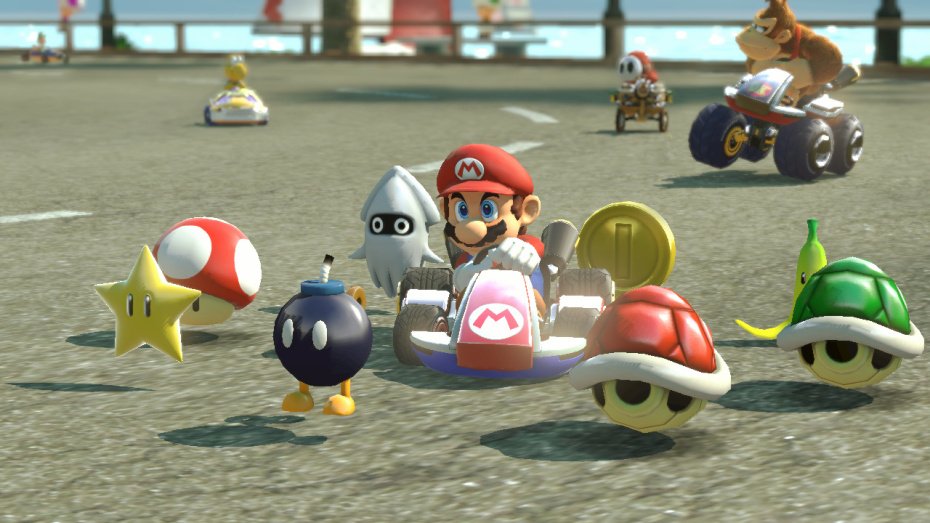 To be fair, the developers have made a conscious effort to soften sting of being unceremoniously knocked off the course due to no fault of the player. This game’s Lakitu helper makes a return in planting players back on the track if they’ve fallen or been knocked off. He is rather charitable, too, putting fallen players back on track more hastily than ever and he even lets you hold on to the items you’re carrying. If the developers had elected for only eight players in the name of easing the chaos, this could have been the series’ most balanced game to date.
Mario Kart 8 doesn’t bother with any single player modes more ambitious than the staples – grand prix, time trials, and battle – and that’s quite alright with me. I vehemently object to the artificial intelligence of the computers in grand prix mode, however. This mode has had its ups and downs since Mario Kart Double Dash!! on the Gamecube, but it’s definitely apparent that a fix is in order. As mentioned earlier, if you’re not winning from the get-go, you’re plunging into a sea of items and madness. If you’re winning, you’re practically untouchable until the third lap when an inevitable blue shell makes your day. Half the time with this game it really does feel like you’re on a rollarcoaster, and it’s a combination of luck and… well, luck, that will get you to the end.
As you can imagine, it doesn’t make for an entertaining or suspenseful single player campaign. Nintendo proved all the way back on the Super Nintendo and with Super Circuit that single player Mario Kart can be thoroughly compelling, and when this mode constitutes half the game, it really should be. Had there been something to sink my teeth into like Mario Kart DS’s mission mode or a battle mode that wasn’t neutered, the aggressive and opportunistic AI might have been tolerable. Alas, there ought to be incentive to play the game well, not board an emotional rollercoaster for the sake of unlockables. 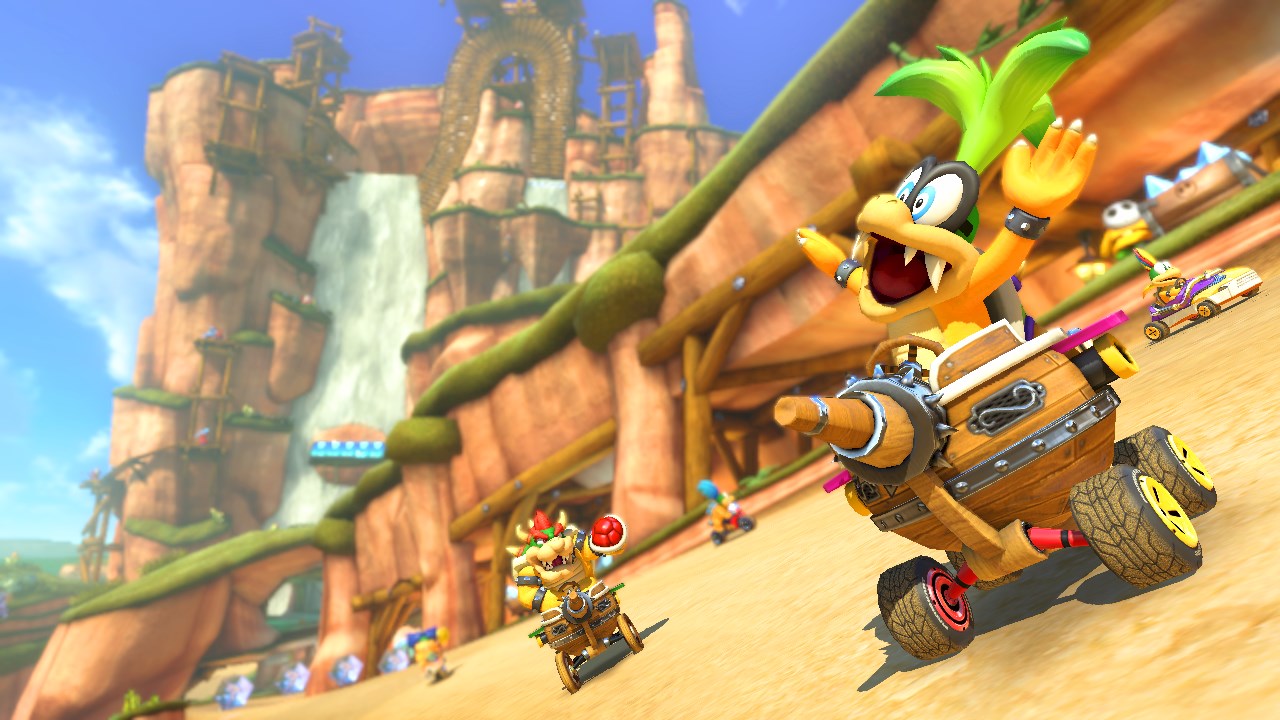 With minimal worthwhile content for solo players, the game defaults to what Mario Kart does best.  Multiplayer has always been integral to the Mario Kart experience and it’s what salvages this entry. As I fired off green shells at friends and family, my complaints about the tracks and the lack of skill encouraged within the races began to dissipate. The game becomes not about winning but simply having a good time; this game works very well as a party game, as the series always has. Bringing back Mario Kart 7’s online communities was a fine choice as well, as the competitions and silly rule regulations lead to a lot of light-hearted enjoyment. There’s a lot less lag than previous instalments, too.
Mario Kart 8 is another decent, if unspectacular effort from Nintendo. The series needs better balancing if skill is to ever become a factor again and the single player mode may be a total slog, but Mario Kart is still a hit where it always mattered: with friends.