A beastly creature captures a pretty girl and hides her in a forgotten-looking castle. You’ve likely heard a story with this plot before, and if not look no further than Disney’s current remake of its ’80s hit (and my personal favourite) Beauty and the Beast. Or, I should say, look no further than Grim Legends: The Forsaken Bride. It’s familiar basic plot is filled with one paranormal twist after the other, making the game’s story downright enjoyable alongside its solid hidden object / point-and-click gameplay.

Since I’ve probably both confused and intrigued anyone reading this with my description of Grim Legend’s premise, let’s start there. The player takes over as a young woman who has returned to her hometown for her twin sister’s wedding, ignoring the strangeness emitting from the invitation. Things continue to be unnerving as the night prior to the wedding progresses, until the evening culminates in the twin sister being stolen by a bear.

Yes, you read that right. Your twin sister was stolen by a bear on her wedding night. But the bear isn’t the end of the danger, not by a long shot. And while it seems quite “out there” the story managed to capture my interest from start to finish. The introduction of paranormal elements definitely helps — I will neither confirm nor deny that I watch hours of ghost-hunting television weekly, but my interest in the subject is definitely present. The bear itself reminds me of the death omen in Harry Potter and the Prisoner of Azkaban; in that book the omen is a big black dog, but the big brown bear seems to also be an omen of death, something you never want to encounter or you’ll know your end is near.

Aside from the paranormal, Grim Legends’ story also features many aspects of traditional fairy tales. I swear there was even a subtle nod at Rumpelstiltskin with a spinning wheel, although I may just be looking for threads of the familiar stories from my childhood due to the title of “Grim Legends.” For the most part the story is quite original despite the familiar content, weaving together a tale that had me curious until the very end. The townsfolk are incredibly superstitious, you see, and it appears it is for good reason…

Grim Legends functions much like any other point-and-click hidden object game I’ve come across; trust me when I say I’ve played my fair share of the genre, with experiences ranging from hair-pullingly terrible to excited wonder. Grim Legends falls into the latter category, as the genre suits the story and vice-versa. There is more point-and-click puzzle solving than hidden object scenes, which was a letdown. But the hidden object scenes that did exist were essentially perfection: none too easy and none too difficult, the scenes were enjoyable. The puzzles presented are never that difficult — although to be fair, I was playing in casual mode for the most part — allowing the story to progress at a decent pace.

Interrupting the story are hidden object scenes; although it may be less of an interruption and more of a mini-party considering how much I love those scenes. If there is anything Grim Legends lacks, its that there are not enough hidden object scenes. These scenes function as is common in this game genre, where the screen is filled with an image filled with various objects (everyone in these games is a hoarder, apparently). A list is displayed at the bottom, either with images/shadows or names of the objects to be found. Grim Legends decided to do things a little differently though, and incorporated a domino game into the hidden object scenes. I do not know why. And I do not care for the option to be there. I tried it out a couple of times, but considering the apparent lack of hidden object scenes I did not want to be drawn away. 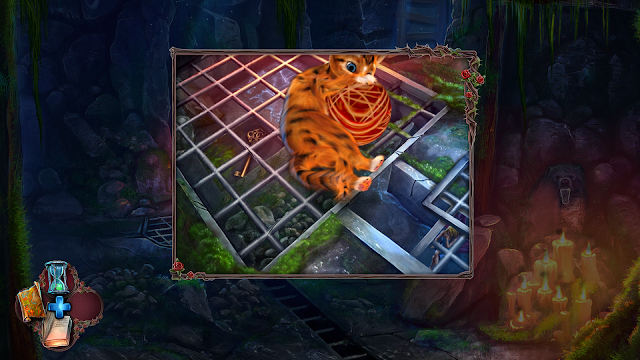 The nice thing about the dominos is that they can be used to help in hidden object scenes, rather than distract from. The game board and object scenes are completely interchangeable at any point in the puzzle, so if you are stuck finding objects you can switch to the dominoes. The purpose there is to cover up all the bears with the tiles. As you find objects, bears will be covered; conversely, as you cover tiles, objects will be stricken off the list. If you’re trophy hunting and looking to complete these scenes without hints but find yourself completely stuck, swapping to the dominoes is a surefire way to get yourself farther in the game without — GASP! — resorting to online walkthroughs. Ick.

Now comes the time I’ve been dreading, the time that I admit to my biggest character flaw: I am a cat person. No, scratch that, I am the definition of a Crazy Cat Lady. I’ve literally walked down the street and picked up a homeless cat, and she is still living with me two and a half years later. But what does this have to do with Grim Legends? That’s the best part! Some games arm you with weapons. Others give you magic powers that appear when the moment is most dire. But in Grim Legends, you get a fluffy orange cat to help you out of tricky situations. How amazing is that?! I can play the game with a cat on my lap and a cat helping me access out-of-reach objects. That’s a win-win situation if I’ve ever heard of one.

Related reading: If you want an example of a hidden object game gone wrong, look no further than Ferrum’s Secrets – Where’s Grandpa? on PC.

Despite my time playing hidden object games, I’m not entirely familiar with the genre on console. It’s a genre that I would always turn to my PC or tablet ahead of a console. That being said, Grim Legends has changed my mind on the issue permanently. The hand-drawn scenes were gorgeous at 55” in full 1080p glory, and now I can never go back. Most importantly, the game played well with a controller instead of with a mouse or touch interface. 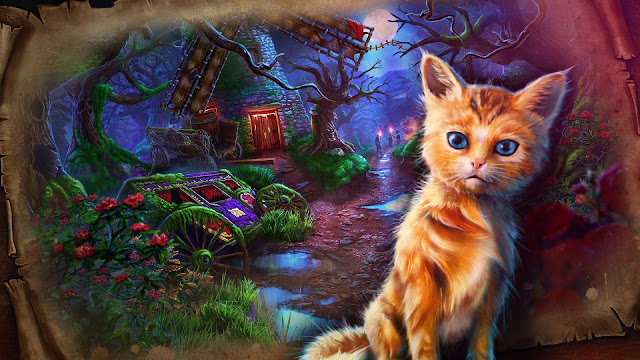 There are basics — nay, necessities — that I look for in hidden object games. One, hidden object scenes; on this front, Grim Legends was slightly lacking. On all other fronts, it was a resounding success. The story was familiar yet contained enough freshness to make it interesting, the hand-painted backgrounds were drool-worthy, the puzzles were a good balance on the fun-challenging scale, and whenever I was in a pinch there was a cat to help me out. What more can a girl ask for?!