Perv on Neptune in glorious VR (or, let’s be real here, Blanc)

Here we go! The real potential of VR is about to be released because Compile Heart is making a VR game, and we all know where that’s leading…

The company, as part of the Dengeki Game Festival 2017, has announced Megadimension Neptunia VIIR for PlayStation 4 and VR. The game itself releases in Japan’s summer (so, our winter for those of us in the southern hemisphere), but there’s not much else known about the game at this stage. A short trailer shows a bedroom, and then we see Neptune, who is sitting down, but then stands up and that’s the end of the trailer. We’re told that we will “learn more about the Hyperdimension girls by participating in daily life with them.”

Based on the trailer it looks like this will be less of a JRPG like the main-line Hyperdimension Neptunia games, and more of a “spend time with a girl in her bedroom” simulator, a-la Summer Lesson. It’s a newish genre made possible through the power of VR and we, for one, are very happy that such innovation exists. We do assume that where Summer Lesson is actually quite committed to preserving the girl’s modesty (by not letting you look up her skirt and so on), Megadimension Neptunia VIIR will not have the same inhibitions. It is a Compile Heart game, after all.

And Now for Something Kafkaesque: The Franz Kafka Videogame

A game based on Kafka’s novels — that caught my immediate attention. He’s the author of that famous story about a chap called Gregor turning into a beetle. Kafka always called his protagonists simply “K.”, and Denis Galanin, the creator of the Franz Kafka Videogame game (yes, awkward, isn’t it?), sticks with that convention.

The FKV (much easier) interprets and adapts Kafka in the guise of a point-and-click puzzle game. The story starts off bog-normal, with K. receiving a surprise offer of employment, but quickly spirals into something decidedly less normal as K. discovers the world beyond his homeland. Here’s a lovely trailer, showing off the game’s Kafkaesque ambience:

The FKV game has been talked and written about online for nearly 5 years. It even won awards last year. Now that we actually have a Steam page, I am finally willing to believe that it is going to happen. Absurdly and sureally, but really.

The PC game is published by Daedalic and the release date is April 6. There are supposed to be iOS and Android versions coming as well, but we don’t have any reliable information on these releases at this stage.

Whoever thought girls getting wet would be so exciting?

Senran Kagura: Peach Beach Splash is just around the corner in Japan. This is a shooter we can get right on board with: a shooter where you replace guns, bullets, and exploding heads with girls, water pistols, and shirts that get quite incredibly see-through when they get wet. The appeal is most obvious, no? We’ve already predicted that people will be offended.

Ahead of the launch in Japan, publisher, Marvelous has launched a minigame that can be played on your phone browsers. It’s a very simple game, but so very beautiful to watch. You flick your phone’s screen, which shoots water at a girl, resulting in her clothes getting wet and see through. 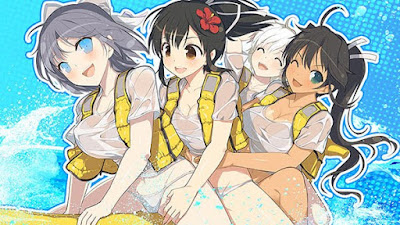 There are seven stages, each featuring a different girl, and when you clear the state you unlock a promo video for that girl. There are also bonuses to unlock by playing, and these are great; you are just four million flicks away from one really awesome wallpaper for your phone! If all this sounds good to you (and we don’t quite know when the game will be released in the west, so this might be the way to go for now), then here’s the link to the game. Remember, it’s only playable on phones. Enjoy!

This week brought the release of Senran Kagura: Peach Beach Splash to the lucky folk of Japan. If you’ve followed the franchise then you’re probably excited for what looks like a festival of wet t-shirts and wetter girls, but don’t fret! Marvelous Entertainment has released new gameplay footage to give us all a taste of what’s to come, and it’s a whole 35 minutes of titillating gameplay (every pun intended).

Hot on the heels of the Peach Beach Splash mobile game that was recently released (in a brilliant stroke of marketing strategy, I might add), we get to see the intro, the various menus, and some excellent cinematics that set the scene. If you’re not in it for the swimsuits, you’ll be happy to know that we also get to see a healthy amount of tutorial footage and some ninja art abilities.

We all knew that the combat in the game was going to be dynamic and flashy, and fans are going to lap this half hour of content right up. Western followers of the Senran Kagura girls are going to have a bit longer to wait until they can get their hands on Peach Beach Splash in all its perky glory, but for now, this should be the shot in the arm that we need to get by.

It looks like Outlast 2 has been banned in Australia. Dear censors: get f*cked