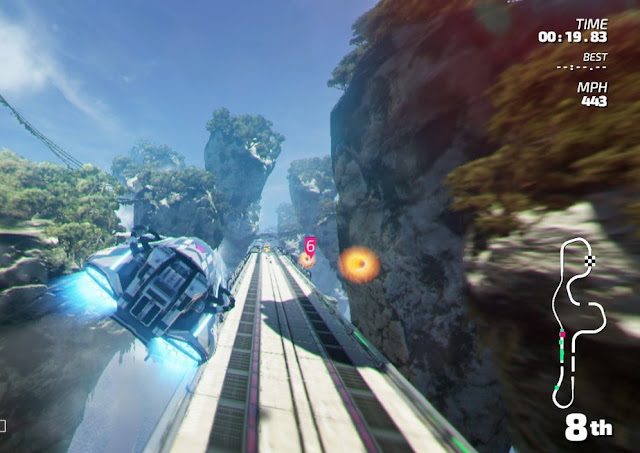 The last WipEout game came out 5 years ago. The last F-Zero, 13 years. Shin’en Multimedia’s FAST Racing series has been filling the high speed, sci-fi racing game niche since then – the latest entry of which, FAST RMX, hit the Switch at its launch to bring racing with twitch reflexes to a whole new generation of Nintendo consoles. RMX serves as a remix or expansion pack from FAST Racing Neo on the Wii U, offering a plethora of enhancements and new content to satisfy fans and newcomers alike.

The FAST Racing series has always had a penchant for sleek, minimalistic design, so it’s easy to distil the games down to their core. To nobody’s surprise, they’re about going fast. Racers blitz through twisting tracks in anti-gravity machines, pulling off daring jumps and weaving past obstacles in order to get ahead of the competition. Boost paths scattered around the tracks will offer a burst of speed – provided you match your car’s polarity colour to the path – and players can pick up energy spheres to trigger an additional boost at the press of a button. The boost mechanics add an element of strategy to the gameplay as players may choose whether to conserve their energy or use it all at once, and the placement of pads and spheres encourages careful driving and track memorisation.

The racing mechanics themselves feel born right out of arcade sensibilities. There’s no tedium of following racing lines or avoiding collisions here; FAST Racing’s sense of precision instead comes from effectively utilising the boost pads and energy spheres. Overtaking is made easy thanks to a comeback mechanic where boosting through a car in front of you will spin them out Mario Kart style, although there’s no slipstreaming available so drivers will have to wait for an opportune moment to make their move. There’s also unfortunately no way to look behind you, so upsets via boost overtaking often come as unwelcome surprises. 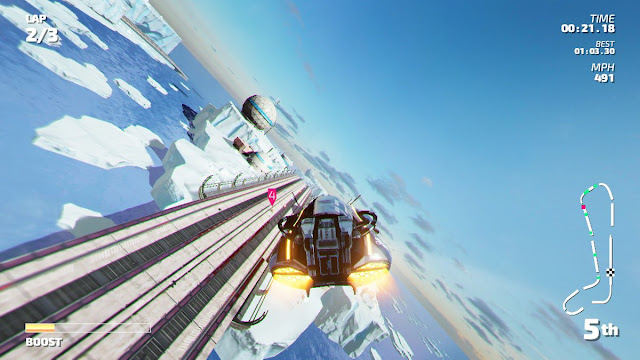 The track design is superb, guiding players on a scenic tour through various futuristic locales while providing a challenge for even the most seasoned driver. All 16 tracks from FAST Racing Neo return with slight graphical updates, while 14 brand new tracks are also available to race on. While the tracks from Neo tend to bear a Japanese aesthetic, the new tracks are more international, taking players to Iceland and Antarctica, deserts and outer space. There is clearly a lot of effort spent on making each track feel unique both visually and in terms of the gameplay, with some featuring track hazards, environmental effects or branching paths to keep the racing fresh.

Things start to get stressful once you see how quickly this game plays. Running at a velvety smooth 60FPS regardless of how much chaos is occurring on screen, the player is constantly bombarded with the need to strafe into energy spheres and keep switching their car’s polarity so that the boost paths offer a speed up rather than slowing them down. FAST Racing employs a mixture of visual trickery and gameplay cues to indulge in the fantasy of hypersonic speed – stages often have a mixture of diagonal and perpendicular lines which hurtle past the player, and tracks often feature corkscrews or aerial segments to emphasise just how much distance you’re covering per second. The Switch’s HD Rumble also adds to the experience by providing tactile feedback of boosting or collisions. All this comes together to create a lean and addictive game feel which will hook players in and keep them wanting more.

The track designers also employ some of the best visual storytelling I’ve seen in a racing game to date. Each locale is distinct, not just by gameplay mechanics but also by architecture, colour, weather effects and scenery. The tracks also feel like they inhabit the space quite snugly; turns will curve around skyscrapers and fork around rock formations. The most memorable tracks are the ones which can integrate storytelling into its mechanics: Mueller Pacific situates the player in a trade port, driving through tunnels over and under the ocean while dodging shipping containers, and the ominously named The Haze tells the story of a smog ridden city and the enormous fans which spin high up in its atmosphere. It’s these little touches which elevate FAST RMX above other games of its genre – its action is given context and the gameplay is anything but mindless. 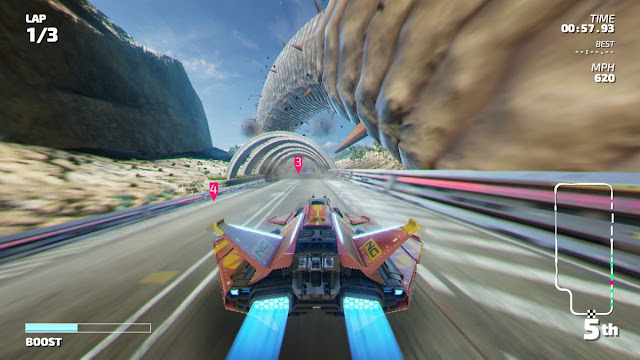 With all the focus on scenery design, it’s ironic to think about how primitively Shin’en have made the background art assets to better aid the game’s performance. Trees are often two dimensional, as are mountains, and buildings tend to be extremely low-polycount. Similarly, textures are simple and repetitive, environmental effects such as raindrops and lens flares hide otherwise very simple lighting effects and even the cars themselves show their pixels when viewed up close. Thankfully, none of this actually matters when the game gets going, since these assets whizz by so fast it’s impossible to scrutinise them without driving into a wall. Thus, even these shortcomings amount to an overall positive – load times are practically non-existent, the framerate stays high even with splitscreen multiplayer and the game’s file size is a tiny 850 megabytes (a big deal considering the Switch’s small internal memory space).

The game’s singleplayer mode features 30 tracks split across 10 cups, with three levels of difficulty. There’s also an F-Zero inspired Hero Mode in which your boost gauge is also your car’s health, and running out of health will forcibly remove you from the race prematurely. This is a game which starts difficult and gets harder, so it’ll take a mighty long time for any player to finish all the content available. Noticeably absent is a Time Attack mode, which I would have loved to practice individual tracks with, although Shin’en have promised its addition in a future update.

FAST RMX feels like a modernised F-Zero in every regard. Its gameplay feels fluid and engaging, and the track design is arguably better than any other game of its kind. Casual players will enjoy the opportunity to race with friends or online, while hardcore genre fans will have some hefty challenges to speed through. Shin’en Multimedia has outdone itself with this one, and Nintendo should be proud to have the small but talented studio developing for its system – it’s a game which will feel right at home on any Switch console.

Review: Psychonauts in the Rhombus of Ruin (Sony PlayStation VR)