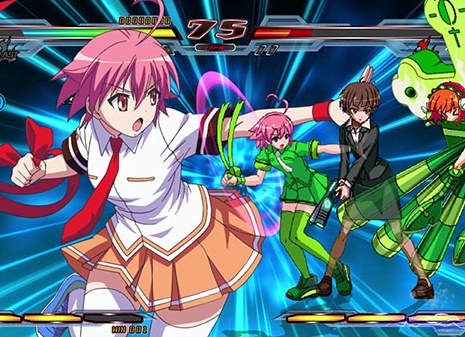 Coming in from the popular 2D fighting specialists, Examu (the same team behind the Arcana Heart series), Nitroplus Blasterz is a game with a roster so niche that most people will only know a couple of the characters. The likes of Saber from the Fate series, and Homura from Senran Kagura are close enough to mainstream, at least for anime fans, but outside of that you’re going to have to be a real fan of visual novels to even recognise this as an all-star mash-up. The fighting itself is quite well polished, but with a roster that niche the game really needed to provide better context in the characters and scenarios, as otherwise the appeal of it being an all-star mashup just isn’t there.

Related reading: For a second opinion, check out Matt’s review of the game’s release on PlayStation 4.

Nitroplus Blasterz Heroines Infinite Duel is a fast paced and unforgiving game. I use the word ‘unforgiving’ as mashing buttons at random will achieve no victories. Nitroplus Blasterz is more closely related to BlazBlue and Guilty Gear, in which you’ll really need to learn the systems, and each character has its own unique fighting style. This creates a much more intense fighting experience as there’s no easy way out.

Being a fighting game most people will be diving in for the fast paced one on one action either with someone in the same room or online. In this regard Nitroplus Blasterz excels at what it set out to do with a lineup that makes things interesting with each combatant taking into battle two support characters to deal more damage through triggered attacks. Like the main cast, this secondary lineup of characters are from all sorts of visual novels, manga and anime, though unlike the main cast they only exist to spice up the combat with some rather interesting and at times crazy moves, so they have even less characterisation than the main cast, and that’s saying a lot, considering how little characterisation the main fighters have. What struck me as an odd design choice is that the main story mode is really nothing more than eight fights with a few lines of dialogue in between. Given that so many of the protagonists do come from visual novels, there could have been so much more done with the cast than this. To compare with BlazBlue again, you could spend upwards of half an hour of reading between fights, and while that might have been <i>too</i> excessive, it certainly succeeded in building the characters up. Here you’re left wondering what the characters are talking about as the conversations don’t get much deeper than each character saying “let’s fight” to one another. I didn’t learn anything new about the characters I was familiar with going in, nor was I left inspired to find out about the characters I wasn’t familiar with.

This begs the question as to why the second mode “Another Story” was not available from the beginning as unlike its counterpart, it’s essentially a visual novel with a few fights to spruce up your thumbs. You unlock this one by completing the main story mode once. This mode helps give the game itself some context, however it still won’t help you understand the relevent characters, and it must be said that for people coming to the game with limited fighting game experience but a love of the characters, just getting to unlock Another Story is not guaranteed; the game is a genuinely difficult one.

So what was so hard with making it to another story? Like a lot of the less well-made fighting games, this one ramps up the difficulty of the final fight to levels that make you realise that the developers are sadists. Through the stages leading up to the final fight each opponent becomes a little harder and even if it was your first time playing and learning the system things progress smoothly enough; you’ll be challenged, but it feels fair. The final boss fight however, feels like trying to do a nude run through a Dark Souls game. Without levelling. Sure it’s possible, but for most people it’s not a challenge that’s going to be overly entertaining. 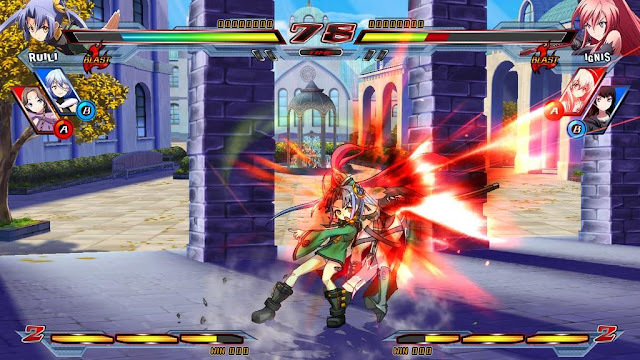 The sheer difficulty of winning that last battle was getting me angry enough that I needed to take breaks from the game. On the bright side, the final boss fight does teach you how to REALLY play and maximize the usage of combos, special moves, dodging, blocking and use your partners for maximum efficiency. Then, suddenly, you’ll be ready to enjoy this game against other expereinced players and from then on you’ll be able to take the skill required to be good at Nitroplus seriously.

On the whole, Nitroplus Blasterz Heroines Infinite Duel is a quality 2D fighter, even if it lacks the narrative in needed and the characterisation that would have made it more effective as fanservice. All I can recommend is that you give the game a chance until you’ve managed to topple the boss, because from that point on you’ll probably find yourself with a game that has a combat system you’ll quite enjoy.