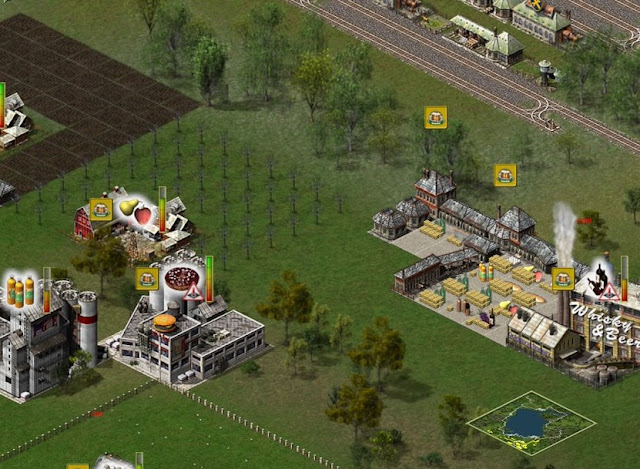 NOTE FOR ALL READERS: UIG has patched this game, so that the save game bug, the only reason it was originally given a low score, is no longer an issue. Industry Giant II is now a solid 4/5 game, and I highly recommend it to everyone who likes “tycoon” games. Read more here.

Logistics is a tough gig; when it works, it’s very much out of sight and out of mind. When it doesn’t work, people complain about the price and inconvenience of shipping without really appreciating just how difficult it is to co-ordinate the movement of goods around a space. It is this unheralded side of consumer culture that Industry Giant II represents, and it’s a game that could be quite eye-opening for some people, I suspect.

Related reading: A very similarly-themed game on the Nintendo 3DS is A-Train. Read Matt’s review of the game here.

Underneath it’s quite dour exterior is a game that does a really good job in modelling the impact that production and logistics has on a town. Like with Sim City, Tropico, or other city management games, in Industry Giant II, you’ll be watching little villages slowly grow to become bustling metropolises. Unlike in those other games, though, in this one you’re not going to be building the cities themselves. Instead your job is to construct the factories, farms, and mines that produce the goods that people in town want to buy, and as demand is met, the towns will build up around your business empire… to your ultimate profit, of course.

The problem is that people who live in towns don’t want to see the animals that they’ll be eating, breathe the pollution that’s creating their furniture and clothes, or deal with overproduction. No, you’ll need to locate the farms and factories well away from the population centres, and then use trains and trucks to move finished goods to the stores in town that will sell them. Each town has specific needs, based on its size, and it’s only as those needs are met that the town will grow bigger. Meanwhile, you’ll need to manage a train and truck network to deliver just enough goods to as many towns as possible; servicing one town in an area won’t yield enough profit to cover the costs of maintaining the industry and transport networks. Oversupply leaves crates filled with goods lying around unsold for too long, taking up valuable space in warehouses.

As you can probably get a sense from the above, there is a lot of data that flows around in the background of Industry Giant II, and learning how to properly read and analyse the data so that you can maximise efficiency and therefore profits, while also servicing as many little villages as possible in order to help them (and therefore you) grow, is the secret to the success of this game. It’s a challenging enough process when you’re playing by yourself. Once you start introducing AI competitors into the mix, however, the game becomes really interesting. Suddenly you’ll also be competing to have a better product range and prices than your rivals. The AI itself is fairly safe, but mixed in with all the other competitive elements, Industry Giant II nevertheless stands tall as a good representation of some of the fundamental commercial dynamics that go on in the real world.

In this way the game’s more like Transport Tycoon or A-Train than SimCity. Those games, of course, are more about modelling the impact that public transport has on the development of a city, where this one is unconcerned with passenger networks, but they’re complementary to one another. At first, players coming from the likes of SimCity might be put off by the lack of city planning involved, but what initially seems restrictive quickly blossoms into being remarkably complex. In Industry Giant II, what you can actually produce at first is quite limited (the game starts in 1900). Staples such as milk and eggs, and basic pieces of clothing, are about as far as things go. Fast forward a couple of years though, and you’ll periodically be unlocking novelties like teddy bears and playing cards, junk food like donuts, and luxury clothing and jewelry. At no stage will you have the resources to be able to produce all of these goods yourself. Instead, you’ll need to decide on some specialisations (personally I like building up toy businesses), and then finding a way to leverage off your rivals’ own businesses so that towns gain a wide enough range of products that everyone’s happy, and the town enjoys explosive growth.

Further enhancing the game’s educational value, with each new product unlock there’s a history of the product in question. Every new train and truck developed comes with a description, too, slowly guiding players through the history of logistical transport. It’s unfortunate that the text is so intensely small on the screen that it is quite unpleasant to read, though. Industry Giant II was given an upgrade to the control system from the PC original in order to work on consoles, and while it’s somewhat clunky at first, it’s manageable and I found that after a few hours I had no issue with the navigation around the game. However, the decision not to update the UI to take into account the TV console experience is shocking. I have to sit as close to the TV as I would a computer monitor when playing just to read the text (including critical information about my company’s finances and performance), and that’s simply not why people play console games. 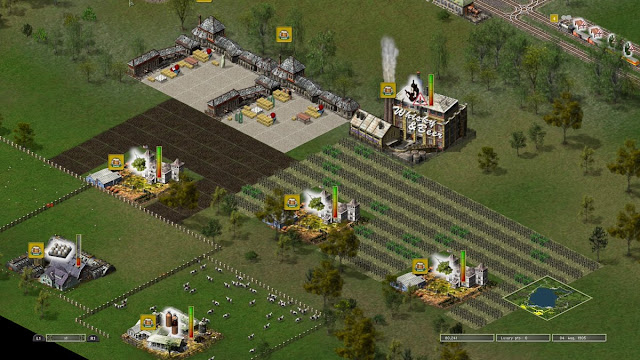 Even less forgivable is the game’s habit of corrupting save files. On a half dozen different occasions I’ve played Industry Giant II for a dozen or so in-game years (more than a few hours of play time in real life), only to find on my attempt to load the save file up that it has been corrupted, and the game would crash on every load attempt. It doesn’t happen every time (I’ve got a save file I’m 50 hours into; touch on wood that it survives), but this is obviously a major, major issue with the game. Worse, given Industry Giant II was such a low profile release, dropped right before Christmas, and there’s been no communication from the developer or publisher, I’m not sure there’s any patching strategy behind this game.

While I don’t normally factor bugs into my estimation of a game (I generally assume that they will be patched out of a game), this one, coupled with my uncertainty that the developer is going to do anything about it, is impossible to ignore. Industry Giant II is a game that I would recommend in a heartbeat, as it’s a fascinating simulation of the fascinating production and logistics processes in economics. It’s also highly educational, both in its approach to gameplay and its actual presentation, and I’m a big fan of games that do that. But all of it is for nought if you’ve just spent a weekend slowly building up a commercial empire, only to have a bug corrupt your save file and make you lose all that progress.