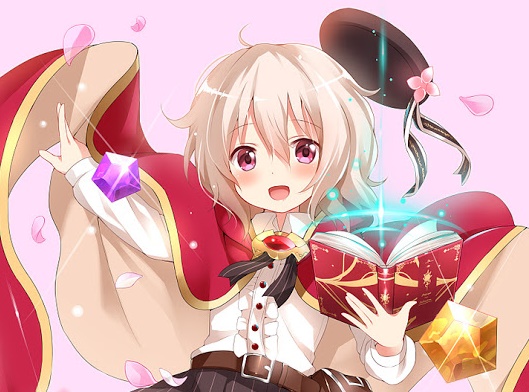 I’m surprised there aren’t more monster-collecting tactical RPGs. The genres go together perfectly; TRPGs put huge emphasis on party composition and team strategy, and monster collecting games give you a huge range of characters from which to build your party. It’s a match made in heaven.

Moekuri is a good example of how well that can work. It’s a deep, complex TRPG with a focus on recruiting monsters to fight alongside you. With some 150 moe girl monsters to collect, each with their own unique strengths and weaknesses, there’s almost limitless potential for party composition.

Its not just about matching elements or picking monsters with the right stat spread. You have to factor in different movement ranges and styles – some can only move in straight lines, for example, while others can teleport. You have to consider the battlefield, and how it might affect your units. You have to think about the moves at your disposal, team synergy, and emergency measures. 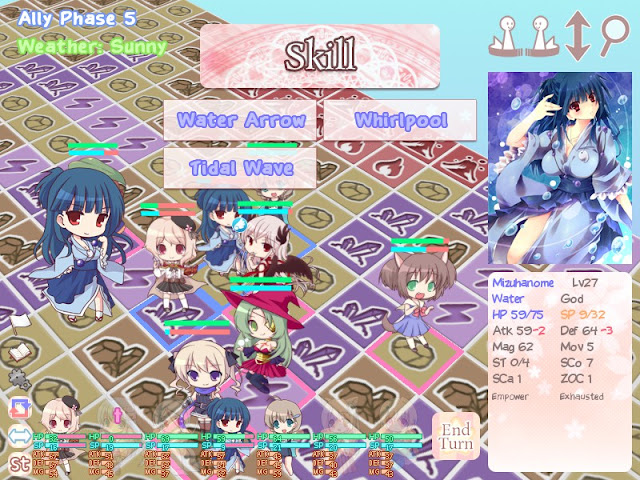 You have to think about all that while you’re trying to choose six members of your party from a roster that’ll count in the dozens before long, and cross 100 before the game is through. It’s a tactician’s dream.

It’s a nightmare for anyone else, though. Moekuri is a hardcore TRPG for hardcore TRPG fans, but that complexity gives it a very steep learning curve. I’m not a master strategist by any means, but I don’t think I’m a slouch, either; Moekuri had me whimpering within the first few levels. It got to the point that I wouldn’t even think about trying a new stage unless my whole party was a good five levels higher than the recommendation in-game.

Even if you somehow can hang in there at the suggested level, you’re still going to need to do a bit of grinding, because you’ll typically come out of one stage a few levels below the recommendation for the next. The story itself is rather short – 25 stages with brief cutscenes in between – but the need to grind stretches it out a lot further. 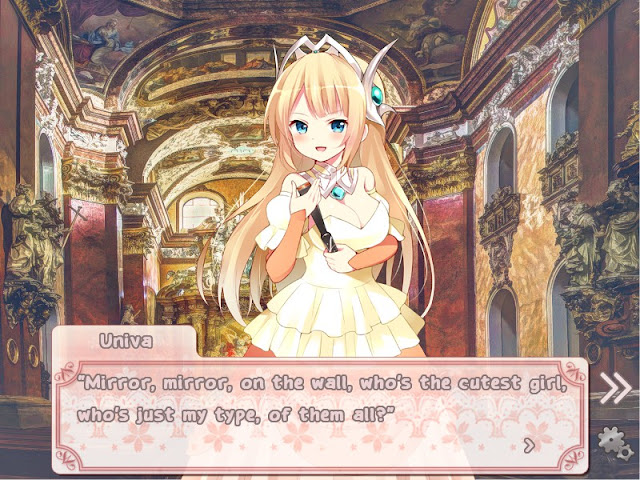 That’s not necessarily a bad thing. I know a lot of JRPG fans enjoy a good level grind (myself included), and Moekuri’s grind is a good one. Free Battles are quick and painless, and give decent enough XP that it never takes more than a few to level up. Experience depends on a character’s level relative to enemies, so it’s easy to power level weak new monsters and get them fighting fit. Winning battles also earns you points that can be used to boost stats and gems that you can use to summon new monsters, making each fight plenty rewarding.

In saying that, I do wish Moekuri didn’t rely quite so heavily on grinding to gate progress, because it interferes with the pacing of what is a cute and enchanting story. It follows Iruse, a summoner who sets out to find her long-lost mother and to understand the meaning of a mystical book her mother left behind. As she soon discovers, this book – Nursery Rhyme, it’s called – has the power to dispel curses, so Iruse tasks herself with cleansing the land as she travels.

Iruse runs into plenty of eccentric characters along the way, like the adorable Princess Univa, who keeps trying to get into Iruse’s pants. She’s also accompanied by her sweet young apprentice, and encounters all manner of cute witches, knights, monsters, and devils. 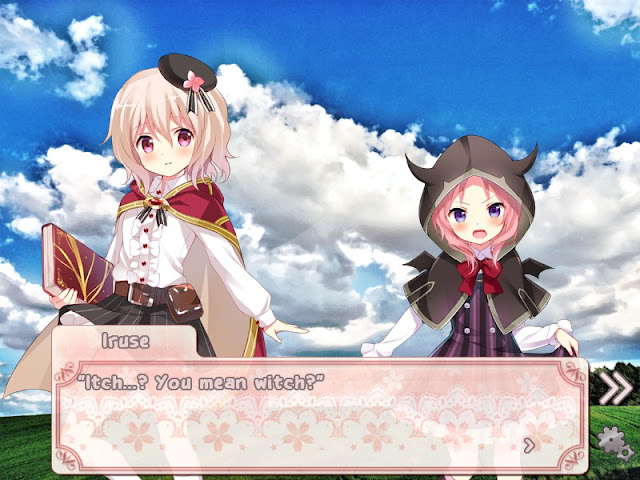 In keeping with that adorable theme, there’s a really lovely art style in Moekuri. This is most apparent in the visual novel-style cutscenes; the character portraits are beautiful, and even the villains feel soft and warm. Even the backgrounds, generic fantasy VN settings that they are, have a magical quality to them thanks to the use of colour and lighting. In battle, Iruse and her collection of moe monsters have cute chibi sprites and gorgeous character art -on their status pages.

Unfortunately, that cute presentation doesn’t extend to the battlefields themselves. They’re simple grids, with coloured icons to denote different types of terrain. They look almost like the sort of placeholder art that programmers use when they need to build something functional but don’t have the art assets yet. Furthermore, the character sprites, cute as they are, have almost no animations. They glide around the map like cardboard cutouts, and attacks are visualized with simple particle effects.

This minimalist approach is at odds with the look of the rest of the game. I appreciate that this is an indie game made by a small team with limited resources, but that doesn’t make it any less distracting. 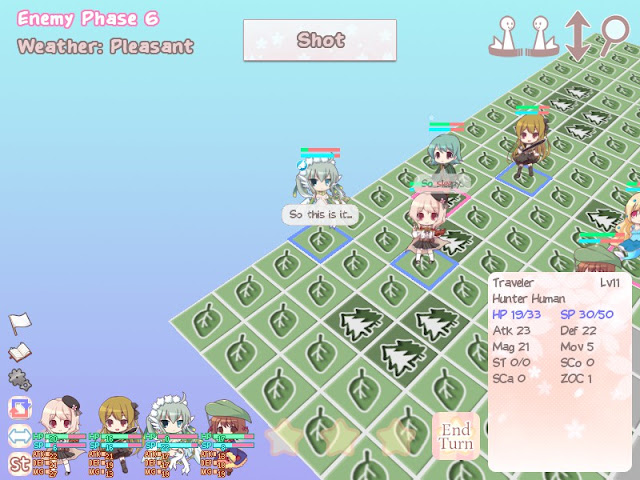 Special mention has to be made of Culture Select’s exceptional localisation job. The English script is clean and natural, while retaining humour and personality that could easily have been lost in translation. This professionalism goes right down to the design of the font – something that’s often overlooked, even by bigger localisation outfits. The English text emulates the playful nature of the Japanese original, and fits the cute visual theme perfectly.

Moekuri is a hardcore tactical RPG wrapped in ultra-cute packaging. It’s a bit rough around the edges, and the difficulty curve will probably alienate a lot of folks, but if you can look past those things you’ll find a lot of depth and enjoyment.