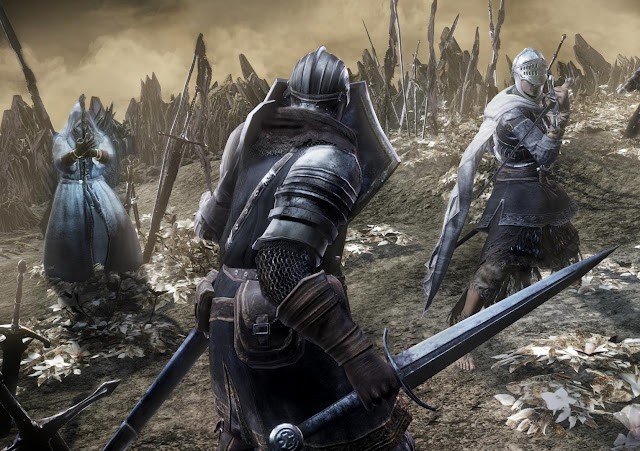 Welcome to the latest batch of short ‘n sweet reviews, where we look at a number of games that we have been playing that we just haven’t got the time to do give full reviews to. These aren’t necessarily bad games – not at all! But rather they are smaller or shorter games, or they might be free-to-play and therefore don’t really need a review at all. But because we love you all so much we review ’em anyway.

Tumblestone deserves credit for being unique in a genre that often times plays things too safe and predictable. Most match-3 puzzle games operate under one of two primary gameplay conditions. Either you have a static board where you need to move pieces around to create three or four, or objects fall from above, making you work fast to put those pieces in the right spot. Tumblestone literally flips the script as the primary gameplay mechanic sees you shooting objects upward towards a pile of stones. It’s like Puzzle Bobble, but different.

You have a single player campaign that offers up some thin narrative as one of several characters who have a baseline reason for being here in the first place, but at its heart Tumblestone is interested in taxing your puzzling skills. The mechanic is actually incredibly simple, and as someone who is a big fan of match-3 games it amazes me I haven’t encountered it before. You have a gaggle of blocks along the top of the screen that you shoot upward at. You need to hit three of the same colour in a row to remove them. 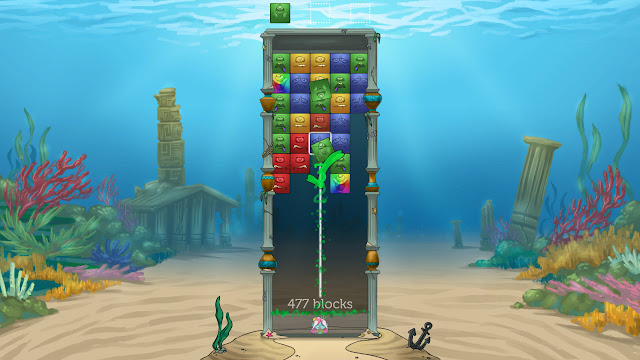 Sound simple, right? It is right at first. But then you start to get yourself in trouble as the block stacks dangle down longer and in more complicated colour patterns. You have to think ahead because if you just over-zealously go zapping one colour away, you might leave yourself with no three-in-a-row options, ending your match.

As if hundreds of single player puzzles were not enough, you also have plenty of multiplayer options. As someone who has spent plenty of time with online puzzle games like Tetris over the years, this is a great option to keep players coming back for more. The biggest issue is I did not find very many actual players online. That is no fault of Tumblestone’s – they just need more people to play it. Kudos to the development team for creating bots however, to help simulate the multiplayer experience if you can’t find a living human.

The potential in this first piece of DLC for Dark Souls III is incredible for the future of Dark Souls III, teasing us with reminders of what made the base game so great. However, some curious design choices make this an episode that some players will have no interest in, and that leaves Dark Souls III: Ashes of Ariandel an uneven experience.

The new environment is full of interesting possibilities with The Painted World providing a starkly beautiful snowscape in which wolves and warriors threaten your progress. It has a sense of openness due to the setting, but it also has the quality level design of the base game. The single player content is uneven, offering some new weapons a some new critters of varying challenge. The new weapons are well-balanced and worth acquiring, but the boss fights are what tend to make or break the Souls games, and here they are not particularly memorable. 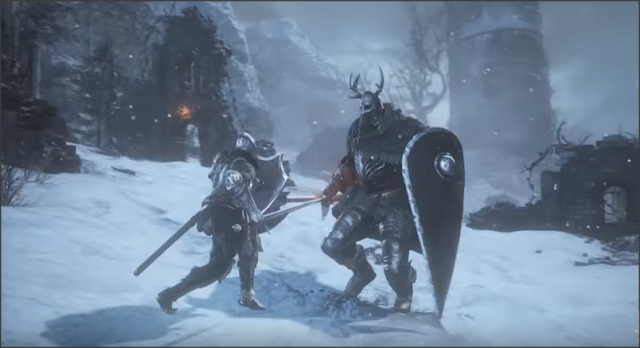 It does not help that there are only a few (two mandatory, one optional) of them. I came away from each one with the distinct impression I have had some variation of them in past games (either in Souls, or Bloodborne in one instance). There is also only really about two hours of content here, so you will visit, you will acquire some weapons, but unless you are a big fan of player versus player, you will likely take your new toys back into the base game pretty quickly.

The one new addition I found interesting was the arena that allows players to battle one on one or in group matches. The idea of creating a formal competitive multiplayer environment with some semblance of rules is actually pretty cool, but as someone who does not get involved in the online side of Dark Souls, I struggle to stay interested in this mode very often. I appreciate that multiplayer is a big deal in the Souls games, but this is the first time From Software has crafted a piece of DLC content that focuses almost entirely on that multiplayer experience, and I think this will fall flat with plenty of other Souls fans.

At first I thought that this title, ‘Super Dungeon Bros’ was a playful play on Super Mario Bros. From the screens, the game looks bright and colourful, and it has that retro vibe that will made me think that the developers are fans of Nintendo’s classic platformer. And the developers might well be fans of Super Mario Bros, but Super Dungeon Bros is actually a ‘playful’ take on ‘bro’ culture, and it is instantly and irredeemably irritating.

It goes in trying so hard to straddle that line between frat bro humour around nonsense masculinity and the love of hard rock, and a celebration of those exact same things. To put it another way, the game wants to be School of Rock, but lacks any of the intelligence that pulled that film through. As a result it looks and sounds like a Saturday morning cartoon trying to be “adult” and “edgy.” It’s not funny. It’s not edgy. What Dungeon Bros ends up being is a soulless mess of unfunny jokes. Gauntlet, or Fat Princess Adventures, which this game is slavishly indebted to in its gameplay, manages to be far more genuinely entertaining.

You’d be able to forgive Dungeon Bros if the action compensated for the misfiring sense of humour. But it doesn’t. This is a slog and a grind of the highest order. Dungeons are randomly generated, but there’s so little variety in the dungeon elements that you’ll be bored with exploring after the first ten minutes. Combat lacks any sense of impact, and the “puzzle” and “trap” sections are mind-numbingly grating.

Yes, this kind of game is better in multiplayer, but if you’ve got any sense, you’d grab Brut@l for an action-roguelike experience, or Gauntlet or Diablo 3 for multiplayer heroics. Even for groups that are willing to go into Dungeon Bros with the right spirit, I seriously struggle to imagine a scenario in which this game has any longevity to it.

On the consoles and PC, F1 2016 is an undeniable return to form for the series – not that it ever disappeared completely, but this year it was good to see the greatest of motorsports have a top-tier videogame again.

Related reading: Harvard’s review of the “main” release of F1 2016.

F1 2017’s port to mobile and Apple TV is, in the first instance, a premium title, and good on Codemasters for that. It’s scaled down from the console and PC titles, but not nearly as much as you might expect, and the upfront cost means that the developers didn’t feel the need to turn this into a grind, like other otherwise excellent racers like Real Racing 3 have a tendency to be. The game looks superb, even on the big screen of my TV. The sensation of speed is there, and the depth of gameplay modes certainly help make you feel like you’re getting the real deal. What lets the overall package down is the controls. While the game is in theory compatible with MFi controllers, it doesn’t work well at all with them, and I found myself using my Apple TV Remote instead. That’s not perfect either, because it’s a cramped device, and the best way to play is with tilt controls… and I hate tilt controls.

Still, once you get in the swing of it, F1 2016 on mobile and Apple TV is a good, low-priced alternative to the console version. For the more casual racing game fans, it’s the better, more accessible option. For the people who play games on the go, it’s worth noting that neither the Vita nor the 3DS gets an F1 game this yes, so this is your only option. And it’s always nice to have a quality game release on Apple TV.

The Friday Ten: Ten games that prove the PlayStation 4 is a JRPG powerhouse