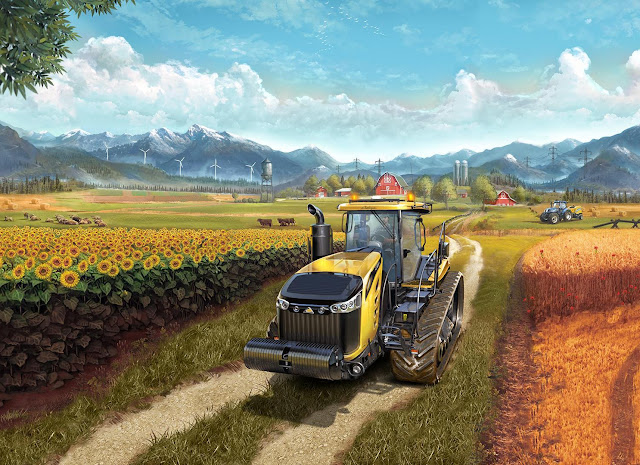 If I had a dollar for every time I’ve recommended Farming Simulator to someone and they’ve laughed at me, before playing it to humour me and become absolutely captivated, I’d be able to buy myself a farm. It’d be a very small farm, sure, because I don’t actually talk to many people about farming games, but as long as I’ve got enough space for a couple of ducks, I’m happy.

Related reading: Matt has enjoyed Farming Simulator for quite some time. Here’s a review of one of the PlayStation 3 titles.

I love Harvest Moon games, but those are innocent little casual games that are worth playing for their charm and relaxing nature. Farming Simulator is valuable not just because it’s a “serious Harvest Moon.” Rather, it’s valuable because it gives us insights into a career and profession that not nearly enough people know about.

Man, that’s some precision farming skills I got going on ^_^ #PS4share https://t.co/HF0jtSA4BU pic.twitter.com/VyBwOibDne

Farmers have a tough lot in life. All those delicious fruits and vegetables, meat and sweets that you eat come from farms. And I know that’s a very obvious statement to make, but the reality is that very few people truly understand what a “farm” is. A survey from just a couple of years ago highlighted that in America 72 per cent of consumers know nothing, or very little, about farming or ranching. I can’t find the source for it, but I remember reading a decade or so ago a study of Japanese kids found that a substantial percentage of them thought peas were grown in the packaging.

You might think that it’s not necessarily important that we know where our food comes from, but in fact, it’s very important that we raise awareness of the food supply. People might be less interested in pretending climate change isn’t a critical problem if they were aware are of the impact (universally negative) it is having on food production. If people were more aware of the way that supermarkets and other retailers exploit farmers to the point of bankruptcy, we might be a little more eager in supporting these people who, quite literally, keep us alive. If people were aware of just how hard farmers work, and just how thankless the work is, we might learn greater respect for food.

Farming Simulator 17, in its realism, is a good start in raising that kind of awareness. You’re not going to have to deal with long-term existential threats like climate change, but in playing this game you’ll get an appreciation of just what’s involved and, indeed, how hard you have to work in order to maintain a farm. 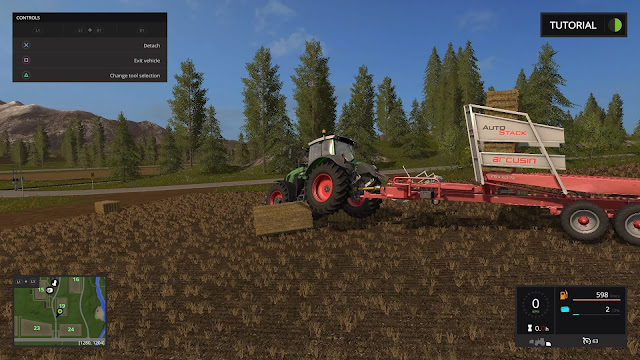 Just planting, raising, and harvesting crops is a multi-stage process that goes well beyond Harvest Moon’s process of dumping seeds in the soil and then watering them each day until they’re ripe. Here you’ll need to till the fields, plant seeds, manage fertilizer, and so on. Each part of the process requires different pieces of equipment, and to be honest, at first it’s all quite overwhelming. In previous Farming Simulator games the generally poor tutorials would mean that people were thrown into this experience largely blind, and many would give up before really coming to grips with it all.

Farming Simulator’s greatest feature is the quality tutorial, which walks people through each of the bits of equipment you’ll need to manage, as well as the process for growing and maintaining crops. Of course I’ve got a background with this series now, but I do think that after playing this tutorial, the overwhelming complexity of the game’s many bits of equipment will no longer be an inhibition to actually playing the game.

From there, the learning starts. Farming Simulator 17 is fully licensed, so the vehicles and machinery are accurate recreations of their real-life equivalents. Unlike a sports game, I don’t think the licensing is there because people want to drive around Fendt tractors and spray plants with Kockerling cultivator machines. The real-world naming isn’t there because people care about the machines; it’s there to enhance the educational value of the game. The fact that you need so many machines, the price of each upgrade; the developer wants to make the point that running a farm is expensive and intensive on upfront capital expenditure. 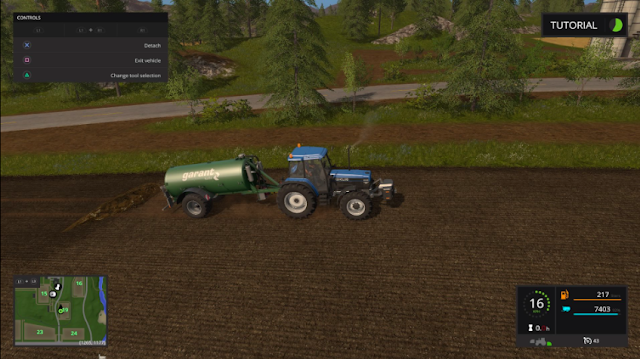 You’ll start managing just a few fields, and even then you’ll want to use hired hands to help with the actual driving of the tractors and operation of the machinery. This again costs substantial amounts of money. Thankfully this is also an automated process, and a matter of pressing a single button. You’re not going to have to worry yourself with the labour hiring market. Farming Simulator 17 knows how to abstract just enough so that farming doesn’t become soul crushing. But what you will realise pretty quickly is that margins for the produce can be very tight indeed. Expanding your farm requires that you’re efficient with how you plan your workflow, and this again mirrors just how hard farmers need to work on the planning and management of their land.

I know all of this will sound quite dry in theory, but in practice, Farming Simulator is quite cathartic. There’s something distinctly rewarding about watching crops grow – even digital crops – and then observing hard work result in something meaningful. Whether you’re ploughing up your fields, or driving your tractor over to the produce depot on the other side of a small and simple, but pretty open world, it’s easy to get quite lost in the process, and the slow, steady sensation of improvement.

There is also the ability to raise animals, but to be honest this isn’t something I spent too much time with. As much as I hate to mirror the views of PETA on anything, I feel the game is doing a disservice to the authenticity of the experience in not accurately modelling the slaughter of animals for meat. It’s not that I have the same moral concerns as PETA does, though I certainly have something to say about the value of developing and enforcing ethical meat farming standards. Rather, I feel very strongly that people should be properly aware of where meat comes from and how it’s produced. If people still choose to eat meat after that, then that’s perfectly fine, but I do feel there are people who would want to be vegetarian if they truly understood the ins and outs of meat farming, and that’s valuable too. 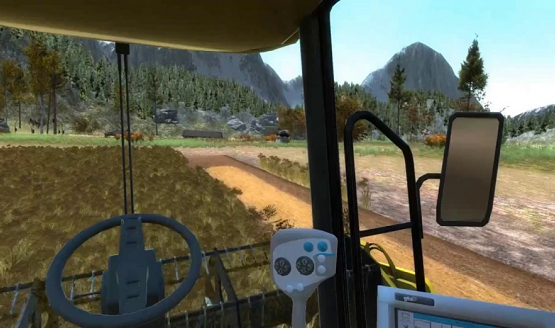 Farming Simulator 17 is a game that I would almost argue should be put into schools, because I see real value in using it to highlight what the life of a farmer involves, and that would in turn be valuable in raising awareness around the kinds of challenges that food supply faces in the years ahead. It’s still a game, don’t get me wrong, and a simple, but effective one at that. It’s also the most accessible it has ever been thanks to tutorials that actually work. But beyond that, Farming Simulator 17 is the best kind of game; it’s a game that offers more than just entertainment.