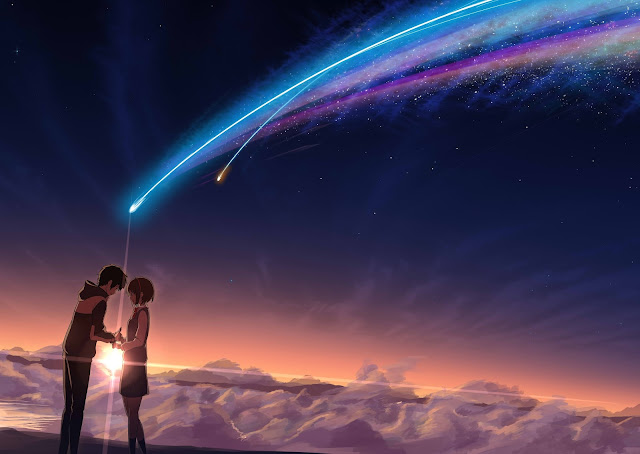 The image of a massive explosion coming down from the skies, bringing complete devastation with it and great social and personal change in the aftermath is a story that you’ll find retold over and over again in Japan. It’s a country already prone to frequent disasters, from volcanos to tsunamis. For the country to have also been targeted by nuclear weapons has become the popular muse for so many Japanese artists since, and firmly entrenched ‘disaster’ as a motif in representing Japan ever since. Your Name, the latest film from emergent auteur, Makoto Shinkai, is a sweet, touching story of serendipity between a boy and a girl. It’s also metaphoric for the impact those nuclear bombs had on Japan, and that makes it a rather powerful film to watch.

One morning, the boy (Taki), from Tokyo, and girl (Mitsuha) from the sleepy rural town of Itomori, wake up to discover that every couple of days they’ll somehow swap bodies. They don’t know one another and at first aren’t even aware of what’s going on. Just that sometimes Taki will be in Mitsuha’s body, and she’ll be in his.

Because they bring their personalities with them when they swap bodies, the two devise a communications system where they leave one another notes on their phones so that they can keep each other up to date with what went on during the body swaps. But then, one day, the body swaps stop and Taki, in investigating why, discovers that the girl’s hometown was actually destroyed three years previous by a meteor crashing onto land, and she was killed in the explosion. 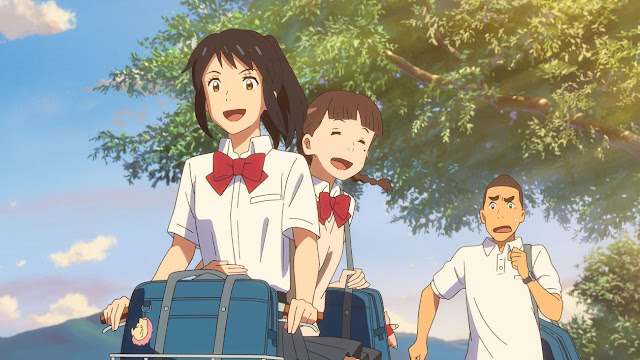 Taki represents modern Japan, of course. He lives in Tokyo, has a good job earning him the kind of money that allows him to indulge in a consumerist lifestyle. Mitsuha, meanwhile, represents old Japan, of tradition and spirituality. It is her home and tradition that is obliterated by the destruction from the sky, much like so much of Japan would be replaced by modernity and Western cultural values following the nuclear bombs. In this way we can read Your Name as an analogous retelling of that period of Japanese history; a coming of age story of the nation itself, as it moved from a naive, but happy, adherence to the past to a maturity, which mirrors both Taki and Mitsuha’s coming to terms with who they are, and who they are to one another.

That’s not to say it’s a serious or heavy film; for the most part it’s by turns sweet and downright funny. As you’d expect for a teenage boy discovering that he’s inhabiting a girl’s body, Taki has a lot of fun with Mitsuha. Specifically her boobs. On the other hand, Mitsuha, who had always wanted to travel to Tokyo and experience normal teenage activities like going to a cafe (that’s how rural Itomori is – it doesn’t even have a cafe), delights in spending all of Taki’s money on sweets and coffees. Quite the set of cliches, of course, but it’s played for maximum laughs, and the way both characters respond to the antics that the other puts them through is wonderful at setting up a relationship and dynamic between the two, without them even meeting once.

The narrative, which hurtles through at a cracking pace, could have spent more time on building this relationship. The inevitable feelings of love between the two characters almost springs out of nowhere. We’re told that they feel drawn to one another, but as difficult as it must have been in context, there’s a lack of a solid why in justifying their motivations. When Taki ups and investigates what happened to the girl, it seems like it’s driven by obsession rather than romance because – aside from having spent a short amount of time in her body over a couple of weeks – he only had a few diary notes on his phone to get to know her. 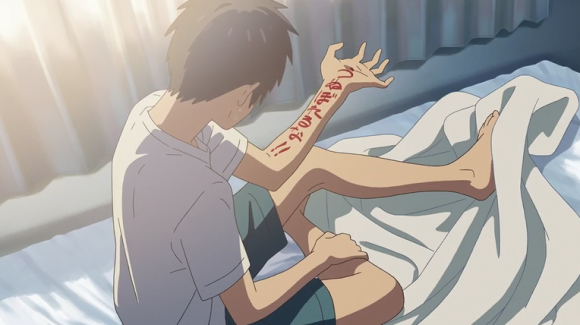 To compare this with a game I played recently that does a similar thing far more effectively: Root Letter is the story of a man investigating what happened to a penpal from a far-flung part of Japan, but in that instance we had his stack of letters to explain why he felt a nostalgic connection to her. Your Name is a breathlessly beautiful and touching film, but it requires that we take it on faith that both characters build a relationship substantial enough by virtue of body swapping to justify the efforts they go through to meet in the latter half of the film.

For my part I was happy to play along, and I found the vision of Japan to be so immersive that I was easily able to forgive Your Name’s minor faults in the pursuit of its grander vision. This is one masterful work of animated art, with framing, use of colour, and animation as good as anything you’ll see this side of Studio Ghibli. Mitsuha is a standout character and is just so beautiful that I probably found it easier to buy Taki’s feelings towards her. If I was to wake up one morning in the body of a girl like that I’d probably be instantly smitten with… myself… too.

The art direction really comes to a head in those rare moments when the two protagonists are able to meet and interact with one another. These are framed to give us the sense of wonder and awe they must be feeling towards one another; and in those moments, both characters absolutely fill the screen with personality. There was one moment the two could see each other because at the moment of twilight it’s possible to see the unseen (it’s a traditional Japanese belief and makes sense within the context of the film). At this point in time they were struggling to remember the names of one another, so decide to write their names on each other’s hand, but, just as Mitsuha starts to write on Taki’s hand, twilight is over and they disappear from one another. The way the pen dropping to the ground was presented was utterly devastating.

I love Your Name. It’s by turns sweet, funny, sad, desperate, and thoughtful, and does a remarkable job of showing audiences a very distinctively Japanese philosophy of the world. That it manages to be both intelligent and feature multiple scenes where a guy, trapped in a girl’s body, makes the most of the experience by fondling him/herself, is testament to just how delightfully eclectic and wonderful the whole package is.