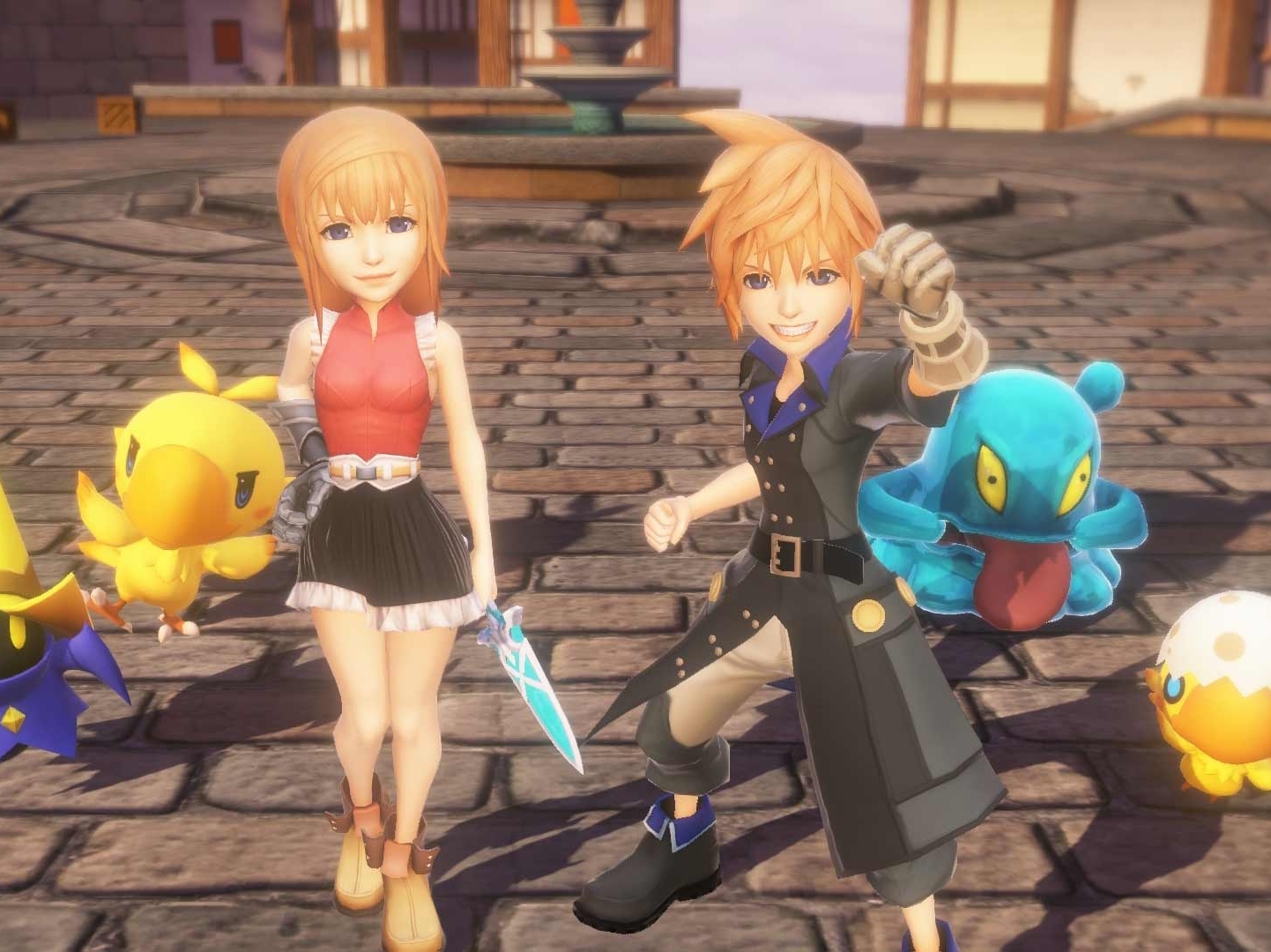 World of Final Fantasy is some of the best work to have been achieved in the franchise. Ever. Both deeply rooted in series tradition, and yet overwhelmingly modern in approach, the game is a love letter to the series for fans, created by a team that clearly loves everything the series has been. It’s going to be a far more “true” Final Fantasy experience than next month’s Final Fantasy XV, and for people concerned that that game isn’t “Final Fantasy” enough, this here is all you need.

R. A Salvatore, the author of the Drizzt Do’Urden series of pulp fantasy novels, is no great philosopher, but he utterly nailed some thinking behind nostalgia, and the impact that it has on people:

“Nostalgia is a necessary thing, I believe, and a way for all of us to find peace in that which we have accomplished, or even failed to accomplish. At the same time, if nostalgia precipitates actions to return to that fabled, rosy-painted time, particularly in one who believes his life to be a failure, then it is an empty thing, doomed to produce nothing but frustration and an even greater sense of failure.” 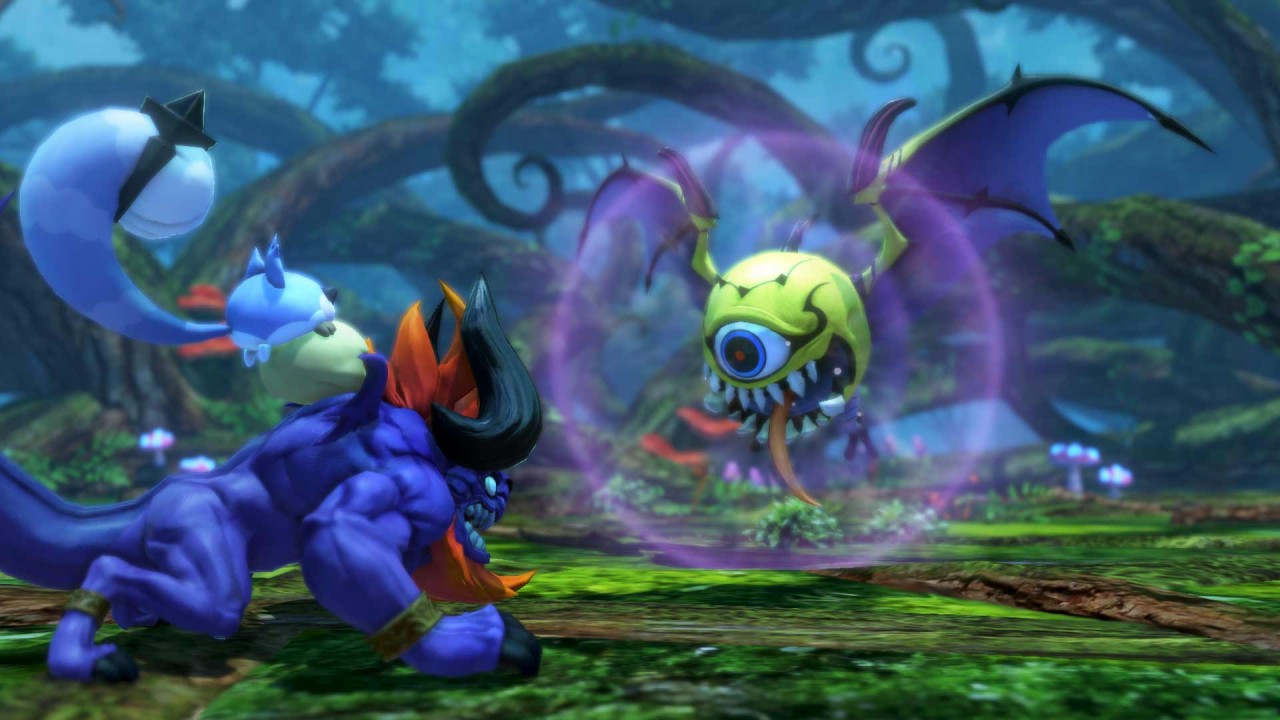 World of Final Fantasy’s core driving energy is nostalgia, and it’s a positive energy in the sense that, as Salvatore wrote, the game is comfortable reflecting on everything the series has achieved to date. In the game you play as a brother and sister team who find themselves able to travel to a fantasy universe filled with, for lack of a better term, Final Fantasy-ness. The first city you’ll visit is Cornelia, which long-term fans will recognise as the first city from the original Final Fantasy. Then you’ll meet up with Yuna from Final Fantasy X, Refia from Final Fantasy III, before sneaking onto a pirate ship, a la Final Fantasy V. I’m not going to give away what comes after that, through the rest of the game, because a big part of World of Final Fantasy’s joy is that nostalgic rush when you come across a new reference to games past; but, yeah, from end-to-end the game is a string of both subtle and overt references to games past.

In fact, if World of Final Fantasy has a flaw, it’s that it assumes that you’re familiar with not just one, but most of the Final Fantasy games of yore. Each step of this journey is rooted in Final Fantasy nostalgia and lore. The background music consists of remixes of Final Fantasy classics, and unless you’ve played the original games that those tracks are from, you’re going to miss out on the rush from hearing them for the first time. The monsters you’ll be fighting are adorably cute, but they’re also going to be instantly recognisable to Final Fantasy fans. The real appeal in fighting them is in remembering what those creatures looked like back in the games you grew up with.

And if it seems like the story of the two chief protagonists takes a back seat or feels hollow throughout much of the adventure, that’s because it was a deliberate move by the story writers to shift the focus away from them; these two characters are avatars in the most genuine sense of the word and are there to represent us re-living our own memories of the Final Fantasy series in lock-step with their journey. Early on we find out that they have amnesia (yes, that time-honoured narrative hook) and are on a quest to recover their memories. In parallel, by playing World of Final Fantasy, we’re recovering, revitalising, or reliving our memories of what made us fall in love with the series over all these years. 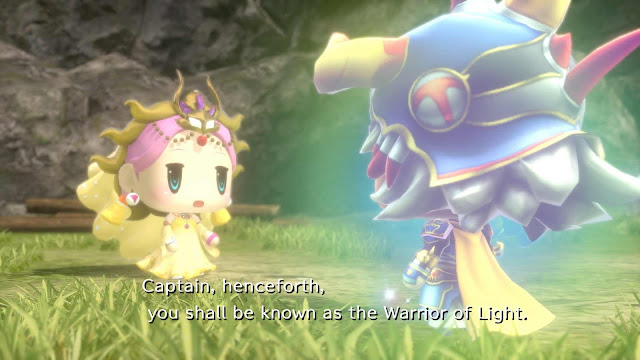 At the same time, the game avoids falling into the traps around nostalgia that Salvatore highlights. The game refuses to succumb to nostalgia for the flaws of the series in the past. The original Final Fantasy kicked things off with the archaic, and now culturally inappropriate, damsel in distress trope, as players are directed to rescue princess Sarah from the clutches of an evil knight who had kidnapped her. This time around the heroes are helping the princess again, but she is firmly in control as the head of her kingdom, and quite un-kidnapped. Where some of the original Final Fantasy games have combat systems that are hard to connect with, World of Final Fantasy’s combat system itself is quite modern, and so, both narratively and mechanically, it feels modern. In other words, it’s a game that is nostalgic but not a slave to tradition.

You’ll get a lot of mileage from the combat system. Something that Square Enix has done a really poor job of throughout its promotion of the game is highlighting that it’s actually a monster-collecting game, similar to Pokemon or Ni No Kuni. I thought I was fairly across the game, in that I had watched all the trailers, but I was surprised when, in my first battle, I was directed to capture the enemy to add it to my collection. Of course, that enemy was a Chocobo Chick, so I wasn’t exactly complaining. Actually, I was quite over the moon; this is the cutest first enemy/party member you’ll ever find in a game, and gets the game off on the perfect note.

Unsurprisingly, the game settles quickly into a rhythm where, with each new area that you head into, you’ll be trying to capture every new monster the team encounters. Capturing them is a relatively straightforward process; by meeting a specific condition, you’ll prime the monster for capture. From there it’s just a matter of reusing the “capture” command on the monster until they capitulate and join the team. At first, the conditions you’ll need to “prime” these monsters is as simple as doing damage to them, but it doesn’t take long for those conditions to become more complex. Some monsters you’ll need to cast heal on, while others you’ll need to blind. With each new monster you encounter, the first thing you’ll do is cast ‘libra’ on them – an analyse spell that allows you to determine the conditions for capture. 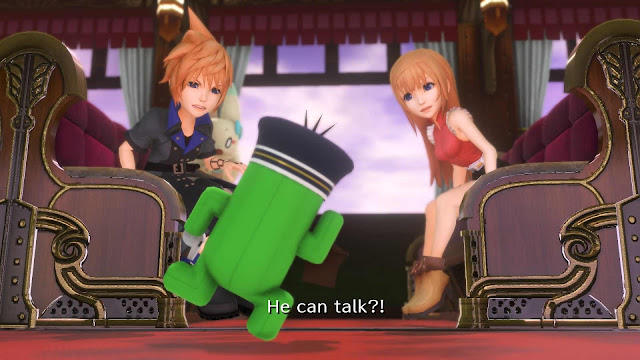 What you actually do with the monsters once you’ve captured them is hilarious all in itself. Monsters have three sizes – Large, Medium, and Small, and the two protagonists can also shift between a Large and Medium form. With all these sizes to play with, you’re going to be making ”stacks,” with a Small sitting on top of a Medium, which in turn sits on a Large. In battles these stacks look exactly as you might imagine: three characters standing on the heads of one another.

In addition to the adorable and amusing effect of spending most of the game with a chocobo sitting on the head of one of my characters, this stacking introduces a lot of strategic depth into the game. The stacks attack as one unit and share the health and abilities of each of its members; so if you have two characters in the stack with the ability to cast “fire”, the overall stack has access to the powered up “fira” ability. The one thing you need to watch out for is when enemies start dealing specific kinds of damage to your stacks and threatening to ‘topple’ them. If a stack gets ‘toppled’, suddenly you’re left with very weak individual characters. Worse, they’re stunned for a time, making them very easy for enemies to pick off.

Of course you’re able to topple enemy stacks in return. The combat system in World of Final Fantasy is a fairly standard turn-based system for the Final Fantasy series, but it’s also one of the most strategically in-depth ones that you’ll see. 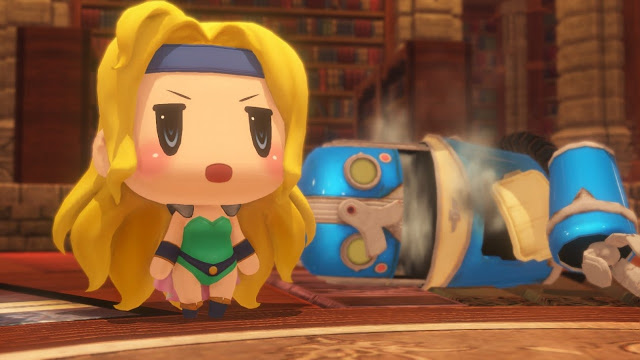 The difficulty level isn’t too onerous, though bosses can put up a stiff challenge. You’ll never get bored of it, though, because the game’s cute characters and sense of humour are so delightful, you’ll keep pushing through just to see what comes up next. World of Final Fantasy is light-hearted and very self-aware. It will regularly poke fun at the games it’s referring back to, and even finds time to break the fourth wall at times (though never to the ridiculous extremes of the likes of Hyperdimension Neptunia). It’s rare that I can sit down to a game to play it for a marathon four or five-hour session and still be giggling from the heartfelt sense of humour at the end of it – but that’s exactly what I was doing with this game.

I can’t emphasise this enough: these creatures are adorable, and you’ll want to have each and every one of them. Square Enix has experimented with the cute, chibi aesthetic with games in the past, such as we saw in the likes of Theatrhythm Final Fantasy, but World of Final Fantasy really perfects the art style. The bold, bright colours and clean, simple designs of the world in general are such a refreshing foil to the overly detailed and complex art design we tend to see in the main Final Fantasy games these days. Not that those aren’t beautiful, too, but this… this is exactly what I always envisioned the classic SNES Final Fantasy games would look like if rendered in 3D. It’s a genuine relief to see that – for all Square Enix’s investment in its Eidos shooters and big-budget Final Fantasies – it’s also willing to continue producing bright, colourful games like this, and also last month’s Dragon Quest Builders.

As someone who has been a lifelong fan of Final Fantasy, World of Final Fantasy was specifically designed for people like me, and I love Square Enix for it. Respectful of its heritage, but creative with how it presents it, this game has had a far more meaningful impact on me than almost any other game I’ve played this year. So, thank you, Square Enix. It feels like a gift.