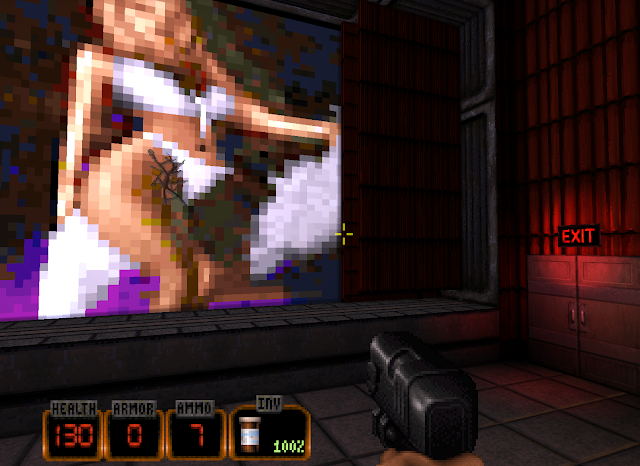 Duke Nukem 3D is a very special game. I’ve played it multiple times across the original release on DOS and the Megaton edition on PlayStation Vita from a few years ago. Duke Nukem 3D has been released once again in the form of Duke Nukem 3D: 20th Anniversary World Tour on current generation consoles and PC, and it is now my favourite version of Duke Nukem 3D. When people think of shooters in the 90s, Doom and Wolfenstein are the names you hear most often, but that’s doing this game a grave injustice, because it’s every bit as good as those other games (mind you, the rampant misogyny-in-the-name-of-‘humour’ has probably tainted the game in the minds of some).

When you think of remasters or re-releases of classic games, the best ones are the ones that live up to your own nostalgia, and give you a trip down memory lane. Duke 3D’s latest release doesn’t do just that. It goes the extra mile with loads of additions making this package worth owning for newcomers and longtime fans.

The gameplay has seen a number of tweaks and quality of life improvements here. You get access to any chapter of any episode right from the get go so if you’re aching to get back to a particular area, you need not waste time progressing through the full game before getting there. There’s also a new set of levels done by the original 3D Realms team, which is also a welcome addition and not something that feels shoe-horned into Duke Nukem 3D for the sake of it. 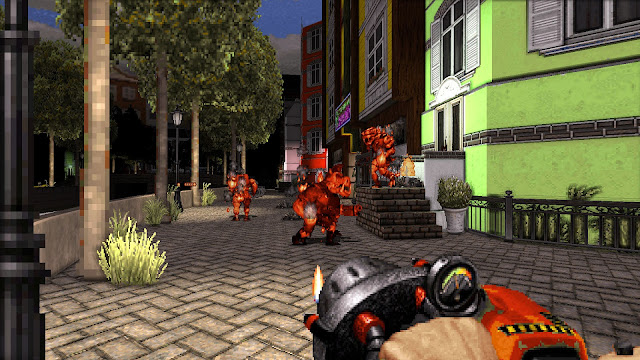 Yes, instead of just releasing a port for modern systems, this release contains a lot of new stuff and some interesting tweaks. For one, you have the rewind option when you die which allows you to backtrack as far as you like. This is something we’re seeing more and more of. It was pioneered by the 3D Prince of Persia games, and has become a mainstay in racing games courtesy of Forza. Here, it’s a really clever way to allow people to avoid the frustration of being sent all the way back to a checkpoint.

As for that new chapter, it sees Duke travelling across the world and, naturally, killing everything that moved. The developers even went the extra mile and got the original voice actor to record new lines for use in game. You have the option to use the original voice lines or the new ones. The engine is more or less the same but I prefer the interface of most things here as opposed to what was used in the Megaton edition. Lighting is improved to reflect modern design principles, but if you decide to experience things as they were 20 years ago, that option is also available.

The second big addition is the developer commentary that appears as speaker glyphs across the map and has a short voice clip about the area. This can be toggled on or off from the menu but I had a blast playing through the game with this on and getting some insight into what went into designing things or enemy placement. There’s an option to enable level counters so you can keep track of how many secrets you have left. I wish more ports and remasters of classics to current generation systems had these kinds of quality of life improvements. It allows fans to play games with more options to tweak them as they please. 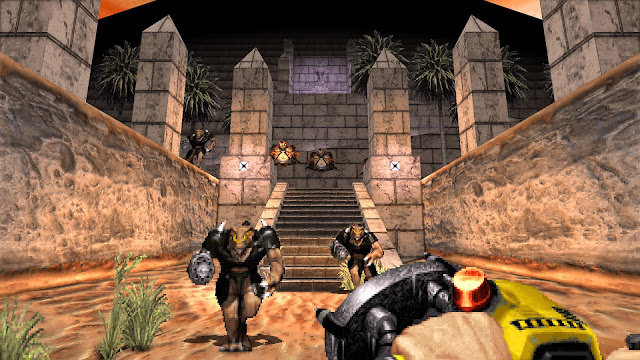 There are problems though. For one, switching weapons takes too long on console with the use of the shoulder buttons. There’s a noticeable delay, and as the action picks up, this can be deadly. It’s odd that a game that modernises the experience in so many other ways doesn’t think to implement the convenient weapon wheel that we are now used to in modern shooters. The expansions present in the Megaton edition are also absent, which is disappointing, as it means that we still don’t have a “definitive” version of Duke Nukem 3D with all the expansions and features brought together. Fans have ended up buying Duke Nukem 3D multiple times so this is a glaring omission.

Related reading: Another classic FPS that has been remade for PlayStation 4 (also by Devolver Digital) is Shadow Warrior. Matt’s full review of that game here.

Gearbox has done a great job with the overall package and deserves a new look for fans. While it may not be the most complete version, that all-new chapter is good enough in itself to get fans interested again. Hopefully, at some stage, we can enjoy new Duke game that does the original King justice, baby.