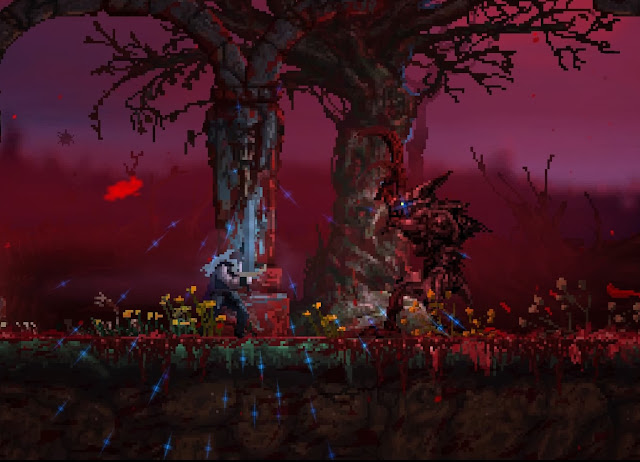 Heavy Metal was one of my favourite music genres growing up as an angst-ridden teenager. As time went on and I gained a family, my angst slowly disappeared and with it my love for heavy metal music. Occasionally, some sort of media will come along and awaken a part of my past self, allowing to remember the path I’ve taken to get where I am today. Slain: Back from Hell is one such example.

Related reading: Our review of the very first Castlevania game.

Bathoryn, the protagonist of Slain, is a grumpy, old grizzled champion of the underworld. In what was supposed to be an eternal slumber, Bathoryn is awoken by the gods seeking his assistance in vanquishing the evil Lord Vroll and his minions. Bathoryn acts like pretty much anyone woken up two minutes before their alarm and complains and whines that it’s his time to rest. Begrudgingly he gets out of bed (a tomb) and the adventure begins.

The adventure is presented in the form of an old school Castlevania. Think of Castlevania III and we’re getting pretty close to what we’ve got in Slain. Exploration is minimal, there are no large Metroid-like maps to be found here, and it is somewhat refreshing. That feeling of refreshment dissipates rather quickly upon Bathoryn’s first death which presents him with the trophy “Get Used to It”. And get used to it I did, dying repeatedly throughout the game, earning the “A Good Day to Die” trophy within the first couple of hours (hint: it meant I died 100 times). It is definitely a test of hand-eye coordination with a bit of dumb luck sprinkled in. It feels very old-school, and while that could put off a lot of people, I personally had a blast with it.


The traps in Slain are plentiful, and require Bathoryn to recognise the tell-tale signs that a trap is ahead. This means a lot of deaths will come so Bathoryn can learn from his errors and pass by unscathed the next time around. The only drawback to this comes sometimes when Bathoryn dies, and the last checkpoint was seven or eight minutes of gameplay prior to the trap. This seems more like an unnecessary punishment to Bathoryn rather than an attempt to increase the difficulty by any means necessary.

In order to make it through the game, Bathoryn is equipped with an awesomely oversized sword and magic. With the sword, Bathoryn can simply swing it at enemies and kill anything that moves, but more powerful enemies require some precise dodging and parrying. The swordplay takes some time to get used to, but there is a feeling of satisfaction when Bathoryn blocks an enemy’s attack at the precise moment and lands a critical strike. The magic is pretty minimal but also useful. There are fireballs that can be thrown, standard or charged. When the mana bar is completely filled, Bathoryn can crouch and dish out an attack that destroys pretty much everything on the screen. Bathoryn gains more weapons as the title goes on and give an additional level of depth to the combat.

This is all presented in the now-common 16-bit art style. Seemingly over the 8-bit throwback fad from a couple of years ago, developers are now turning to classic titles from the Super Nintendo and the Sega Mega Drive/ Genesis for inspiration. I do feel that Slain kind of needs this art style though, as if it were presented in any other fashion it would deteriorate from what is achieved here. The animations are crisp and the hit-detection is spot on, and watching the way that enemies spew blood and show off their insides when they die fits in with the theme of the world. The environments themselves are incredibly creepy and dark. Imagine if Castlevania IV was mixed with the original DOOM and you wouldn’t even be imagining half of what is going on in Slain. 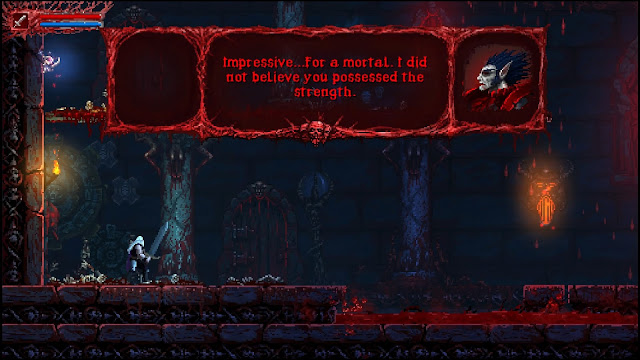 The music of Slain is beautifully crafted by Curt Victor Bryant of Celtic Frost fame. Widely known in the heavy metal community for progressive heavy metal tunes, his style suits the game brilliantly. Every instrument seemingly served a purpose in driving up my anxiety for most of the game. The way the music plays slowly as Bathoryn traverses the landscape, then amps up when he reaches an underling of Vroll does well to increase adrenaline and a need to destroy everything in sight. I hadn’t felt this way since Simon Belmont’s theme ramped up the action against Dracula in Super Castlevania IV. Coincidence? I need to find this soundtrack in some form of official capacity (YouTube is not enough), I want to throw money at this and see more of it. It’s so good that even Bathoryn can head bang to the music upon defeating a boss!

Related reading: For a look at where modern Castlevania is at, check out the recent 3DS game.

Slain: Back from Hell is a unique fish in a sea of pixel-art platforming throwbacks. The level design for the most part is well-done. The difficulty suits the atmosphere created by the music and art style. I mentioned earlier that Slain awoke a part of my past-self. Needless to say, it was fun to feel a similar adrenaline to what I felt as a 17-year-old. It felt like Wolf Brew reached into my brain, and plucked out a combination of my favourite things growing up. If the element of luck was reduced some of the checkpoints a little more forgiving, this would be essential.