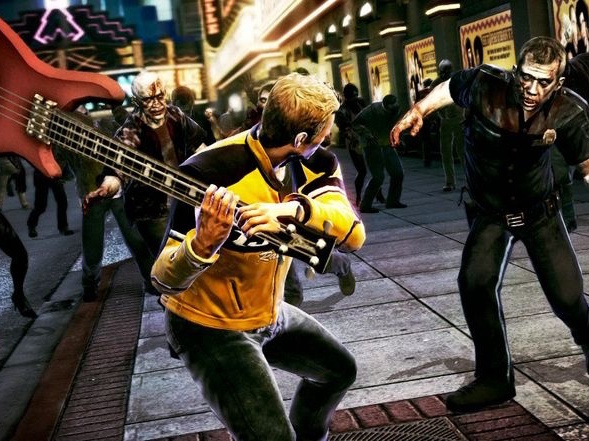 Capcom’s Dead Rising series was really instrumental in changing the way we look at zombies in games. These once classic slowly moving undead have been given a bit more life when it comes to gnawing on the flesh of the living. Granted freedom of movement in a more open world environment, these beings that once offered a very scary and real threat became something more akin to an obstacle in a narrative that looked at the darker side of humanity.

Coming back into play after a decade, the original Dead Rising and its sequels are now remade into HD, not unlike some of Capcom’s other series of Devil May Cry and Resident Evil. Unlike the Resident Evil series that places protagonists on a specific route through an adventure, with a constant series of clearly defined goals along the way the Dead Rising games take a whole other approach with much more freedom as the goal is much more about surviving until help comes.

Each case has either protagonists, Frank or Chuck, needing to survive for 72 hours. Three days. It honestly doesn’t sound like much as a quick trip to a restaurant or grocery store for food and then hunkering down behind a well reinforced door should be enough to stick around for that long. Unfortunately, both Frank and Chuck have more pressing worries to deal with in that time too. Not every crisis brings out the best in humanity and there are more than a few psychopaths between the safety of their respective bunkers, that are almost as much of a threat as the zombies themselves. Good luck, boys.

Hearing a tip for a major scoop, freelance photojournalist Frank West heads to this middle of nowhere little town Willamette, U.S.A.. As the helicopter flies him into town, the start of the first zombie outbreak can be seen as he takes photos of the ensuing chaos and those unfortunate to be caught by these raving undead. Being dropped off on top of a mall during a helicopter chase by the military as this was clearly a no fly zone, Frank tells the pilot to come back in three days. Seventy-two hours may not sound like much, but Frank is going to need everything he can if he’s to survive this mess. 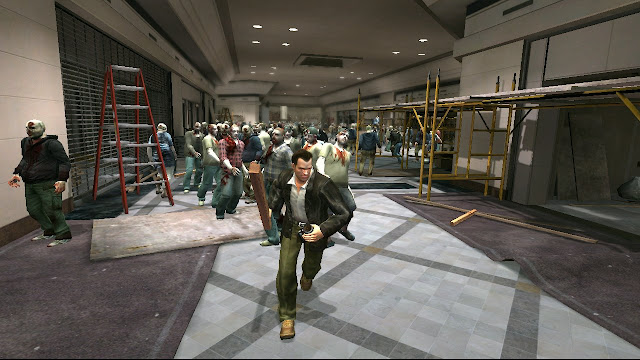 Dead Rising shows the multiple faces of humanity from the light, to the dark, and everything in between. Crises either bring out the best or the worst in people and the mall that Frank finds himself in is a clear indication of this. Coming in from the roof things didn’t look so bad until a stuck up, arrogant, typical self important rich woman found her dog on the other side of the doors that were barricading the parking lot from the entrance of the mall. It’s not long before she moved just enough of the barricade to allow the zombies into the mall killing her and multiple others in the process. With nothing else to do, Frank has to run for the safety of the second floor and the passageway that brought him inside.

Frank’s adventure is now about a decade old and certain gameplay mechanics show their age though the facelift makes things enjoyable enough on this survival escapade. Survival comes down to three things. Luck, chance, and hoping that the lady of two currently holds you in good graces. Honestly though, as much as survival will require some thinking and planning, a good deal of it will require Lady Luck to be on your side as everything that can be picked up has an expiry time and weapons always seem to break at the worst possible moments. Baseball bats, katanas, sub-machine guns, fully automatic rifles, shotguns, Mega Man Legends Servbot heads, and so much more are lying around just asking to be used. Each of these have their own break points so holding onto several at a time is a good idea. That said, it’s a bit hard at times considering the size of Frank’s inventory (i.e. too small).

In this Zombie infested mall there are two types of people. There are those that have managed to somehow survive, and those that have full on snapped, crackled, and popped from reality. It will be your choice to have Frank save someone. Likewise, it’s your choice whether or not you decide to tackle some of the various psychopaths that have now made this mall their home. Saving people can earn a load of PP instantly leveling Frank up one, two, sometimes even three times, but in some cases you’re really meant to question whether it’s worth it, because often you will think that those people should not be saved.

Taking up the reins a few years later after the events of the original is Chuck Greene, former Motocross Champion and now victim of another outbreak that took his wife from him and infected his daughter. Needing to inject his little girl with Zombrex every twenty-four hours, Chuck needs the cash in order to continuously buy some in order to prevent his little girl from turning. Strapping chainsaws onto his bike, Chuck risks his own life in order to mow down enough zombies in order to gain the money he needs. Problem is that this time around he’s been accused of being the one that started it. 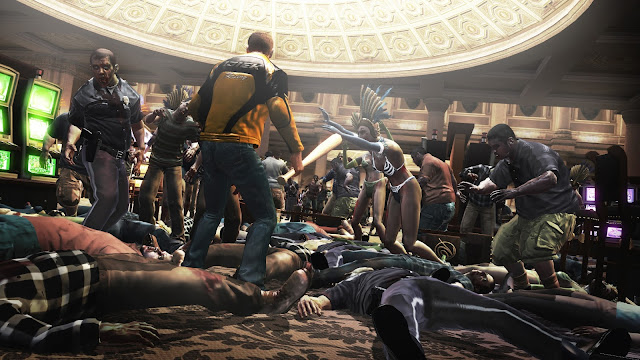 A bit like the original, Chuck has seventy-two hours to not only survive, but also find out the truth behind what happened. Even if he manages to survive for three days, without proof he didn’t do it, things will not exactly go well when the military gets there. Being forced out of the safety of the bunker for two competing reasons, Chuck is going to have his work cut out for him.

Luckily, Chuck is a lot more resourceful than Frank and knows how to use duct tape in order to slap a few items together in order to make some rather potent weapons. How duct tape puts some of these contraptions together I’ll never know but we’re not meant to question the MacGuyver-like skills that Chuck has.

Like in Frank’s tale, Chuck’s actions are entirely your own. Saving people and guiding them to safety is entirely up to your mood and there’s still a slew of human psychopaths in order to do battle with. Whether or not you save people because it’s worth it or because it’s the right thing to do is again the principle decision that you’ll be making… and again walking away is the hardest thing to do, but you’ll often do it because facing off against certain psychopaths just isn’t worth it.

Overall Dead Rising 2 plays a lot like the first, with the ability to combine weapons in order to make them more potent thrown in. Aside from that, the sequel looks and feels smoother than the first, but you’re going to have to be a real fan of this kind of game to want to play the two back-to-back.

Dead Rising 2: Off the Record

Taking back the reins from Chuck, Frank gets back into the saddle in order to face off against the zombies once again. It’s been years since the first outbreak and things for a while were great for Frank. Book deals, show rights, money left right and centre until he decided enough was enough and this was not the life that he wanted for himself. He wanted to get back into what made him tick. Journalism. Getting his chance, Frank is stuck in the same outbreak, and indeed the stakes are even higher, as he has been infected and must find both the answers he seeks and the Zombrex to keep him alive. 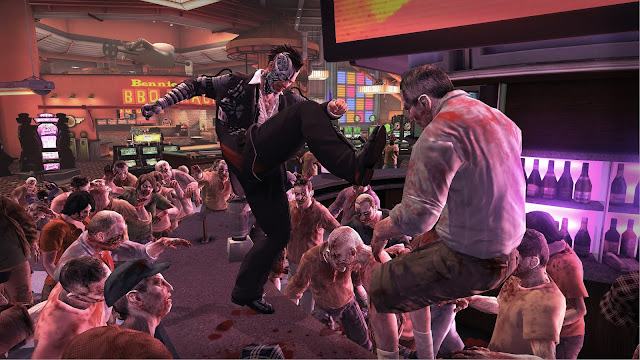 Off the Record is a very smooth experience that combines the best bits of the first two games; not only can Frank modify weapons like Chuck, but he can also take his camera back out in order to boost his abilities as he did in the first game.

Unfortunately Off the Record also felt like a complete re-hash of the Dead Rising 2, protagonist aside. Cutscenes happen in the same manner, the outbreak occurs, and then Frank is the bunker instead of Chuck, with the same people and other superficial elements that are only slightly different. From there NPCs appear in the same locations and a lot of events play out the same. I had really expected something new but instead was getting a lot more of what I had already done which was disappointing, and a real weakness in trying to offer the three games as a package.

There are a couple of mechanical improvements, however. The main one is that, originally, if either Frank or Chuck bit the dust then there was a choice to either load a previous save or start back up all over again. This choice is still there but in this game a checkpoint system has been put in place meaning that if you screwed up it’s not a very long trek back to try again.

Each Dead Rising is an interesting experience on its own. While these three titles do in certain cases show their age, and don’t really work as a collection as they are too similar to one another, individually they are all worth diving into as they are a lot of tense fun to play around with.