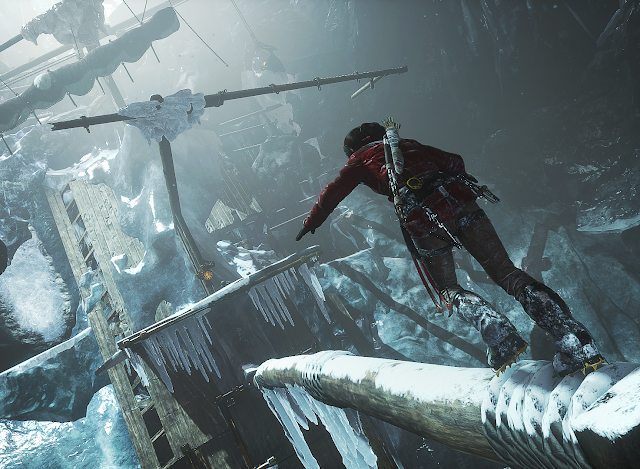 Rise of the Tomb Raider does not get off to a good start. Utterly obsessed with hurling its infamous hero, Lara Croft, into rockfaces, having avalanches drop on her, and throwing her into perilous positions where she needs to desperately run across platforms crumbling from underneath her, the immediate first impression that you’ll have of the game is that it has, to appropriate Tropic Thunder, gone full blockbuster.

Related reading: For a second opinion, you can check out Nick’s review of the game’s original Xbox One release.

That’s just the introduction. Things don’t go much better in the first “proper” scene of the game, as Lara goes hunting for relics in Syria. There a helicopter attacks her, she’s hurled into some more rocks and, yep, there’s a crumbling platform she needs to dart across. It feels like the game’s running out of steam almost before it starts, and what passes for development is the fact that now it’s not just the elements out to get her, oh no. Now she’s also shot at by the generic cult bad guys that look like they’re pulled straight from a Dan Brown trash pile.

For the longest time (by blockbuster game standards – this whole thing goes on for what feels like hours), I was not happy at all. The intensity that we got in the 2013 Lara Croft reboot, where sparse dialogue and cut scenes were coupled with spectacular environmental design to tell a story of terror, innocence lost, survival, and generally rebuild Lara from a hotpants-wearing piece of fanservice into a genuine character, was gone. In its place was what the previous Tomb Raider often threatened to become, but just avoided going all the way; a play-for-play clone of Uncharted, albeit with a much more attractive and interesting lead. 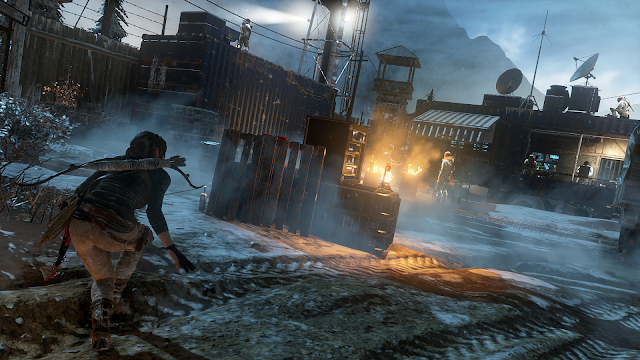 Indeed, this new context made elements of the “new Tomb Raider” formula even more unpleasant. The first game was telling a story of a desperate fight for survival. That moment where Lara kills her first animal, feeling regret all the while doing it, was affecting, narratively appropriate, and made the hunting that you were all-but forced to get up to for the rest of the game appropriate. But in Rise of the Tomb Raider, Lara’s now a seasoned adventurer (who apparently forgot to pack rations), and now hunts better than the most redneck of rednecks. I don’t like when hunting is mechanically forced on players, as it is here (you need the upgrades to your equipment that the ‘loot’ from the dead animals provides). Especially when there’s no narrative purpose for it. I avoid hunting games for a reason.

So, in short, the opening acts of Rise of the Tomb Raider were bombastic, kinetic, action-packed, and completely, hopelessly, derivative. Yes there were tombs to discover and plunder, and these were puzzle sequences rather than action set-pieces, but it was hardly enough, when the rest of the game promised God knows how many more hours of Godawfulness.

Thankfully, there is a point where the game seems to tire of this relentless nonsense, and in calming down, Rise of the Tomb Raider becomes better balanced in the second half, and gets some of the groove of its predecessor back. Then you’ll get to enjoy a story that is quite vintage Indiana Jones in tone, complete with a sinister, secretive organisation as the primary antagonist, but there’s just enough in there to throw some surprising curveballs along the way, too. 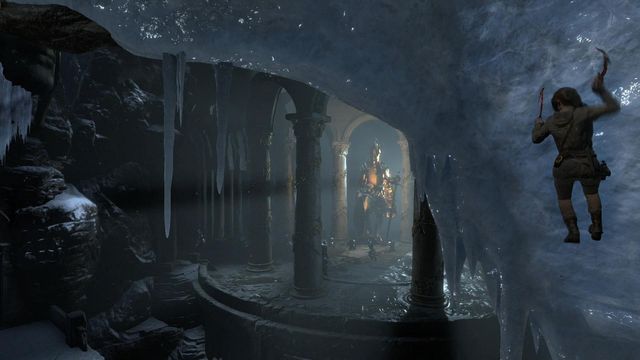 And, while you’re going to be quite disappointed if you go into Rise of the Tomb Raider expecting anything too insightful along the way, I did like the way that the game allies Lara with a native people interested in fighting back against western interests and the exploitation of the native area. It’s refreshing to have a blockbuster that doesn’t have a subtext of nationalist propaganda to it. Less impressive is the narrative’s use of the good old fashioned daddy issues to motivate Lara in the early stages, though she is such a strong and resourceful character overall that she quickly transcends that nonsense. There’s also a nice flip of the damsel in distress trope, just in case the daddy issue thing was still leaving the impression that the new Lara isn’t the feminist hero the reborn franchise has been building her up to be. It’s a tight, well-written digital page-turner that has been written here, and those moments where the game isn’t busily slamming Lara from one pseudo-torture scenario after another are the moments where the game is at its best.

The world of Rise of the Tomb Raider is gorgeous. Aside from the footprinting in snow effects (which don’t respond properly to the movement of bodies through them at all), the intricacy and level of detail that has been worked into what at first glance might seem to be a dreary, cold, desolate space is truly impressive. Each environment is distinct to one another, too, from the run-down Soviet installation through to the completely different ruins of antiquity that you’ll also be exploring. The ‘main’ tomb, which you eventually delve into for the final act, is effortlessly the most beautiful representation of a lost city both frozen and decrepit that we’ve ever seen. The development team at Eidos know that the aesthetics are a real strength of the game, and take every opportunity to pull the camera back for is slow pan value, wherever they can.

Doing this of course reveals areas that Lara will never explore, but Rise of the Tomb Raider is also far better at hiding the superficiality of its expansive environments than its most immediate rival, Uncharted 4. That game just loved to show off massive environments before dragging Drake through the most arbitrary and contrived corridors I’ve ever seen in a game. Rise of the Tomb Raider’s corridors offer more naturalistic barriers, and the spaces tend to be slightly more open in the first instance. Actually finding the secrets scattered around the place is one of the game’s real highlights. 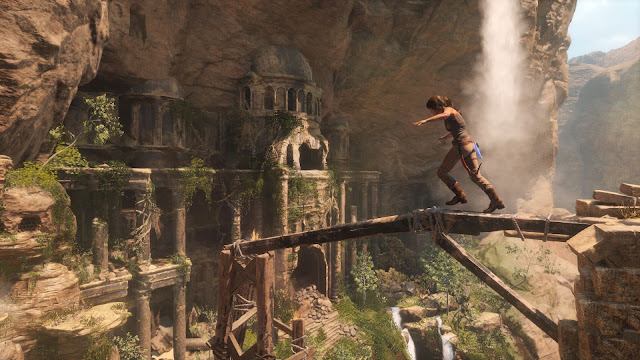 Equally, Tomb Raider’s sense of lore is compelling. I found the idea of running around the lost island of Yamatai much more fun in the first game, but then I was also already a fan of Himiko and ancient Japanese history going into that game. This one is set in the mountains of Russia, and the backdrop of religious cults is timeless fun. Backed with the authenticity of the relics that Lara finds along the way as it is, the setting into a believable one.

Cover shooters all behave much like one another as far as I’m concerned, and I’m sure most people will know what they’re getting into in playing Rise of the Tomb Raider. The previous Tomb Raider already played really well, so it’s also not surprising that the developers haven’t tweaked what was already working. It does feel like there’s a greater focus on stealth this time around, which is the better way for this series to go, frankly. Future Tomb Raiders would do well to give people more options for overcoming challenges with stealth, however, as they tend to be limited to just one or two “correct” paths in Rise.

What was impressive was that the developers went back to the drawing board to make the optional tombs a more involved process. As with the previous Tomb Raider, these environments offered a break from the combat and abuse to Lara’s body by offering simple puzzles to solve, with a substantial reward at the end for the good work. Rise’s puzzles are generally more creative and engaging than last time, and as a result I felt more inclined to actually go and hunt them out. Indeed, the most general thing I could say about the gameplay is that it’s reminiscient of, but enhanced, in comparison to what we played previously. 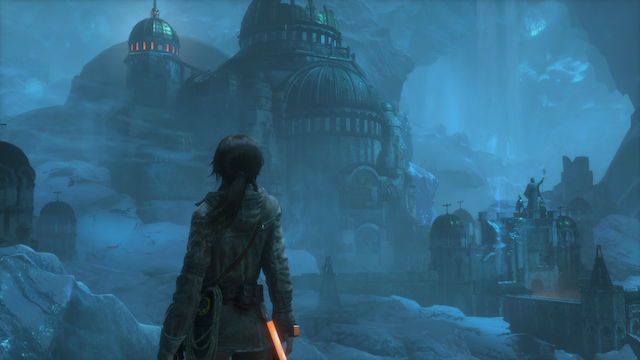 Rise of the Tomb Raider is frustrating on one level because it’s so completely in thrall of the blockbuster system that you can feel the creative frustration on several levels through the game, from its storytelling through level design. That frustration has resulted in a blockbuster that almost breaks free of its limitations at times, and it’s certainly an enjoyable game. It’s just that it would be interesting to see what the developers could come up with if they had a more limited budget (and thus lower sales expectations, allowing them to go after a more specific audience with a more focused game).