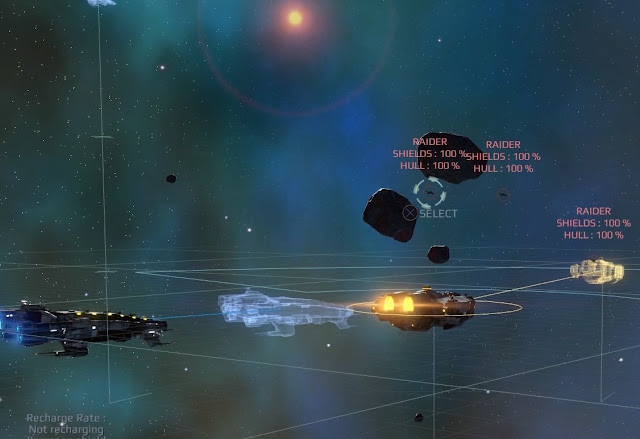 One of the recent Australian releases that I can’t quite get enough of is Black Lab Games’ Star Hammer: The Vanguard Prophecy. This tactical space battle game hooked me in on PC, and again when it released on iPad, and did so because it features a superb combination of balance, tactical depth, and a quality depiction of the fantasy of epic battles between giant space ships.

I was, however, more than a little surprised to hear that this game was coming to console. Star Hammer is one of those strategy titles that has a complex enough interface that you wouldn’t expect it to function well on console. On the most basic of levels, for example, you’ve got full 360-degree control over where you position units, taking into account both distance and depth, and that kind of fine control naturally favours towards a mouse where you can precisely locate the spot that you want to direct the ship instantly, and simply click the button to issue the command.

Now having played Star Hammer on console, I’m going to say this; short of fast-paced RTS titles like Starcraft, I no longer think developers of strategy games have any justifiable excuse not to bring their games to console. Europa Universalis IV, Civilization VI, I’m looking at you; the tiny Aussie indie team at Black Lab has just showed you all how it’s done.

Oh God the enemy is going to ram my ship 🙁 #PS4sharehttps://t.co/0sOLpRW9FT pic.twitter.com/yykS3B0pfK

Star Hammer plays beautifully on console, with the controller inputs feeling intuitive and comfortable after just a level or two to adjust to the new way of playing. Of course, it helps that this is a completely turn-based game, in which you have plenty of time to carefully plan out your moves and issue commands, but not once did I find myself making mistakes by pressing the wrong buttons and having to re-commit actions and the like.

On a purely superficial level, the controller does help with the cinematic appeal of the combat, too. Once you’ve finished committing actions in Star Hammer, you tap “end commands,” and then a couple of seconds of combat plays out in real time before pausing again and allowing you to enter in further commands. You can’t issue commands during this real-time section; the strategy of the game is in anticipating enemy movements and creating strategies of your own before knowing what your opponent is up to, but you’re able to manipulate the camera around, and the controller does make panning around beautifully cinematic. With planets and stars dominating the background, this is a beautifully panoramic game, and relaxed in a lounge with the action on the big screen is the ideal way to experience Star Hammer at its best.

The single player campaign is a meaty one, and well worth the low asking price for the game. The narrative is pulpy fun, generic as it is, and though it lacks voice acting and those other production values that we generally expect from console games, the words are woven well enough that there’s plenty of drama anyway. There’s real long term value in the game thanks to the branching paths through the story. Your actions and play style (defensive vs. aggressive) will determine what missions open up to you, so there’s plenty of incentive to replay the game to try out those different paths.

What remains disappointing is the lack of multiplayer. As mentioned, this is a supremely balanced tactical combat game, and the skirmish mode allows for all kinds of fun scenarios with the AI. Turning the settings all the way up to the maximum allows for truly incredible dogfights than span the entire screen and can easily run over a full Sunday as you carefully position units around to take advantage of weaknesses in the enemy line and fill in gaps of your own. The ebb and flow of combat has a glorious tabletop feel to it, which makes it a natural fit for multiplayer action. Unfortunately that’s not to be, and while the game’s AI is competent, it is disappointing that I can’t take on my friends in a battle of strategic might.

Perhaps that’s something that the team could work on together for a sequel. Star Hammer deserves to be spun into a franchise, and there’s plenty of room for future games to add additional factions and storylines. Indeed, I see potential for the game to be spun into something similar to Warhammer, where there are dozens of different sides, and a significant part of the joy of the game is carefully crafting unique and creative forces by mixing and matching different units, before pitting them against anyone who is interested in playing against you.

That’s thinking forward, though. For now Star Hammer continues to be one very fine introduction of a new franchise that is well worth paying attention to. The experience might feel a little unusual to people who are less familiar with the kind of strategy games that were previously exclusive to PCs, but I strongly recommend that people take the time to adjust to what Star Hammer offers, because once it gets its hooks in, it’s unbelievably rewarding.

DDNet in Japan #8: All about Tokyo Game Show, Day 1