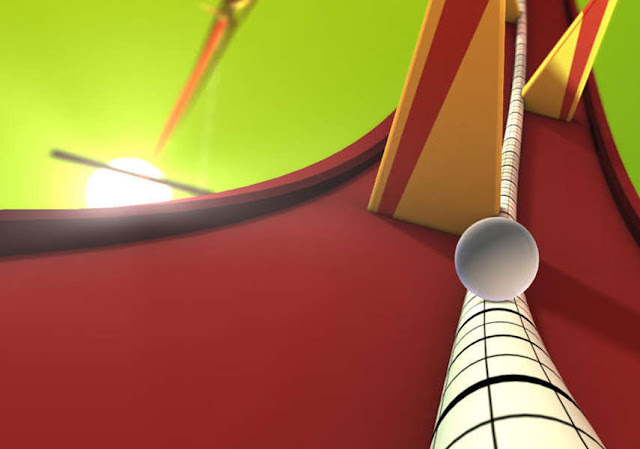 The Apple TV is not a game console, but when paired up with a MFi controller, it is quite a decent game playing device in its own right. This week, we’re taking a look at a couple of recently released Apple TV games in out Short ‘n Sweet reviews segment. So, if you’ve got an Apple TV yourself, consider picking some of these up!

I love rhythm games, of course, so I was always going to check out Epic Orchestra. Though it looks like one of those pixelated games that come dime a dozen now, this one has some really fun features that make it worth checking out.

In Epic Orchestra, you play as a conductor of an orchestra, and each performance takes a classic composition from artists such as Johann Pachelbel, Chopin, Bach and Debussy and then has you swiping on the Apple TV remote in time with the music and on-screen commands. 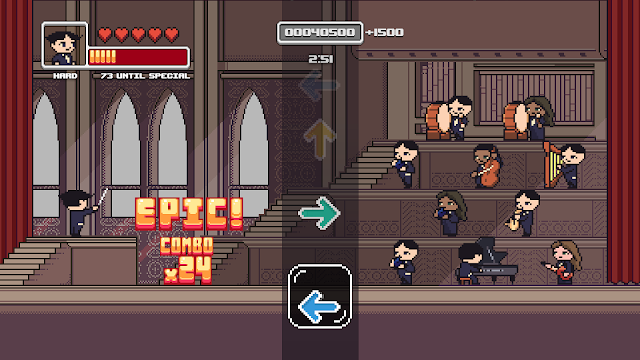 The music is of a good quality, though it’s MIDI rather than proper performances, but then this retro sound fits in well with the appealing pixel art style. I especially liked the way misses were handled – you only get to make a couple of mistakes before the ‘fail’ screen pops up, and with each miss more and more members of the band disappear. It gets quite tense when you’re down to just a couple of musicians, and know that there’s a tough section coming up.

The base download is free, and then you can buy extra “conductors” (song packs) for a small price each. The free download has enough music that you’ll know by the time you’ve worked through them whether you want to splash out for even more. If you’re a fan of music games, I suspect you just might.

Now here’s a rare example of a racing game that manages to be genuinely different and interesting. Proun+ is inspired by the breakaway abstract artists, Wasily Kandinsky and Piet Mondrian, which makes it absolutely breathtaking on the eye as you control a ball rolling through worlds of sharp abstract designs and bright, vibrant colour.

As a racing game, Proun+ is actually very simple; the ball accelerates itself and is locked to a “cord” that comprises the track. Your only real job is to get out of the way of obsctacles as they pop up, and you can manoever a full 360 degrees around the cord to weave in and out of the objects. As you race you’ll also slowly build up a speed boost, which, timed well, can help you catch or overtake the other balls. 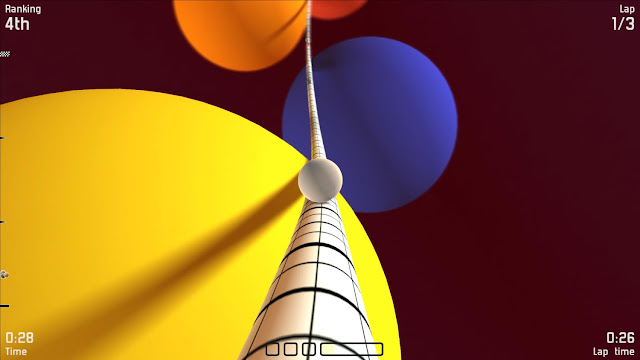 There are no weapons or any other way to affect your opponents on each track – they work more like time trial ghosts than opponents, but it doesn’t take long for the tracks to become so difficult that you’ll be glad for the lack of real competition as well. Make no mistake, Proun+ knows how to really test your twitch reaction speeds.

There is a lot of content in the download, with track after track and more difficultly levels than you’ll want to contemplate. My only disappointment with this one is that there is no controller support. There are three different control settings with the Apple remote, and they do all work, but for something so extreme in difficulty, I would have appreciated the option to play with an input method that I’m more comfortable with.

I was a big fan of Risk as a kid. With age, my love for the game has worn somewhat, because it is far too reliant on the luck of dice rolls to be what I would consider a true strategy game, but as a casual way to kill a Sunday with friends, it’s a game I keep close.

Risk on the Apple TV is a very no-frills experience, when compared with Ubisoft’s decent take on the game on console and PC not long ago. The bulk of the game involves looking at a static map, coloured to reflect the territories that each side controls. Pieces don’t really animate, and dice results pop up when attacking or defending with a minimum of fuss. It’s not a particularly expensive download, but it’s also one that does very little to make the most of the video game format to enhance the static experience of a board game.


There are multiple different maps to play on, though, and that’s a nice touch. In addition to the classic map, two have a pirate theme, and then there’s a French Revolution map, which allows for a faster game set exclusively in France. This one, along with the online multiplayer, costs a bit more via a DLC purchase, though, which bumps up the overall cost of the game a bit.

Still, the Apple TV has turned out to be a quality gaming device for the local multiplayer experience – games like Song Pop Party, Fibbage XL and Crossy Road all make the Apple TV a handy little device to pull out at parties, and Risk, with its robust local multiplayer, adds to that. And, hey, unlike the board game at least you won’t have to pack up after playing with this.

Back as a kid, I have very fond memories of playing Nintendo’s soccer game on my Gameboy. If I was to play it today, I imagine it would be too simple to really hold my interest, but as a kid I played this game over and over again for months.

Pixel Cup Soccer 16 is basically that Gameboy game, remade and coloured for the new generations. And I wasn’t even slightly surprised to find that, indeed, the game is now too simple to maintain my attention. It’s a two-button soccer game, and generally lacks for tactics – other than passing the ball to a player that doesn’t have opponents around him, there’s not much more to do here than charge towards the goal and kick, in the hope that it goes in.

Because the game plays so simply, character and team statics are overwhelmingly important. If I was to do my usual thing and pick Japan, for example, as the statistically weakest team in this game, I have absolutely no chance to beat a team like Brazil, no matter how good I am at playing. This is distinctively different to proper football games, such as FIFA or PES, where player skill is able to compensate for a lot of statistical weakness in a minnow team.

There’s not much personality to compensate for the simplicity of the game, and gameplay modes are limited to a couple of different kinds of competitions, as well as standard multiplayer options. The game does play beautifully well with a controller in hand, but there just wasn’t enough meat to the experience to offer any real longevity.

Dungeon Tiles is a very simple little game in the same mould as the likes of Threes! and 2048. Those games are enormously addictive, of course, so there’s nothing inherently wrong with the idea of Dungeon Tiles. The problem is that the game also doesn’t do enough to really separate it from its peers.

The basic idea of the game is to match up tiles as they appear on the play field. As they are matched up, their effects become more potent, which means that they will have a greater impact, until three in a row are matched up and they all disappear. You match them up by “shifting” the board in a direction, which causes all the tiles to shift in that direction before they bump into something (or another tile of the same type, at which point they’ll be absorbed together). 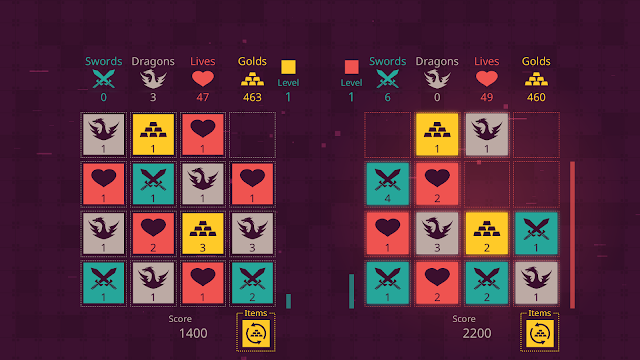 The one exception is the “dragon” tile, which will damage you if two dragons connect together. These tiles can be removed using “sword” tiles, and it’s important to do that as quickly as you can, because if you run out of health it’s game over. This all sounds abstract, I know, but it only takes a couple of games to get an understanding of how to play – no thanks to the game’s tutorial, which is right up there with the most inadequate that I’ve ever experienced.

A two-player mode helps to add longevity to the game, but otherwise this is a very simple game that is entertaining, but not the kind of thing I could imagine playing for long periods on my television.