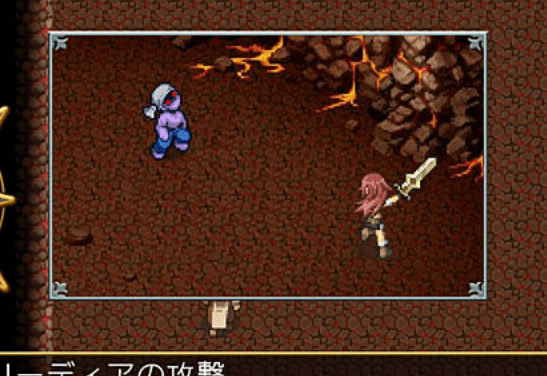 Finally Circle Entertainment has its name attached to a game that I actually enjoy. That might be because the publisher’s only role in the production of Adventure Bar Labyrinth is that it’s the publisher of the 3DS version of the game (it’s developed and self published by Rideon on other platforms), but boy is it nice to write something nice about a game that has Circle’s name attached to it.

Related reading: Matt’s review of the mobile version of the game, which landed on the ill-fated PlayStation Mobile.

Adventure Bar Labyrinth is a fairly vanilla roguelike, and while that might sound like a backhanded thing to say, I happen to really enjoy the basic concept of a roguelike, so I’m quite happy when developers play the ball straight and stick to convention with this genre. It’s a challenging and repetitive grind, as befits the genre, and while that won’t sit well with everyone, there’s an elegance to Adventure Bar Labyrinth that is quite admirable. 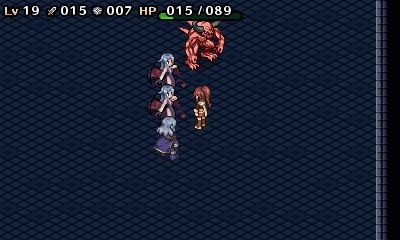 As is typical for the genre, there’s a thin narrative running through the game, and calling it “thin” is only if I’m being generous. A labyrinth with mysterious powers has opened up near a generic JRPG town, and is attracting explorers from around the world who look to challenge it. You play as a local who also happens to be linked to the local tavern.

This is where the game’s most unique hook comes in; through your adventure, in addition to the usual loot you find in a dungeon crawler, you’ll pick up ingredients, which can then be used to create dishes back in the inn. These dishes will provide benefits for your next foray into the dungeon, and tend to be more potent than the other consumables you’ll acquire along the way. Healthy eating, folks – do it.

We’ve seen plenty of other roguelikes head down the minimalist path with their narratives. Most recently, Shiren the Wanderer on the PlayStation Vita limited the cut scenes and sweeping epic scenarios. That game did, however, did such a great job with its minimal dialogue and game design that it was hard not to take notice of it as a cultural artefact of Japan anyway. The same can’t be said for Adventure Bar Labyrinth. More closely resembling an RPG Maker project in tone, the storytelling here is purely pragmatic and functional; you’re given the information that you need to play the game, and characters in town will talk because that’s what JRPGs do, but there’s not a great deal of insight that you’ll be pulling out of this one. 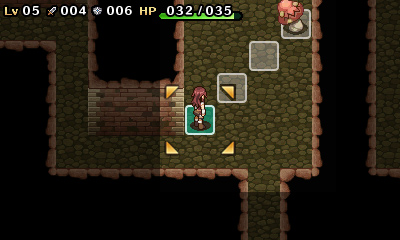 Once in the dungeon the goal is as simple as delving as deep as you can. As with all roguelikes, levels are randomly generated, so no two delves will be different, and if an enemy or trap happens to defeat you while in the dungeon, your hero will be thrown out, after having all equipment, experience, and treasure stripped from her. While in the dungeon, she might find items that allow her to “escape” it instantly; if that happens she’ll still be level 1 the next time she goes into the dungeon, but she won’t lost any equipment or treasure. This is how you make future attempts at the dungeon easier, by storing the loot across multiple attempts at the dungeon until you’ve got the perfect combination of equipment and items that will get you through all its challenges.

Enemies escalate in difficulty with each dungeon level deeper that our intrepid hero delves, and so, while you’ll often find the staircases to the next level quickly, it makes a lot of sense to explore each level fully, to both search for items to make the quest easier, and defeat as many enemies as possible for the experience. Visually, those enemies are the best thing about Adventure Bar Story; they are cute, charming, and have fun little attack animations, which actually slows down the pace when compared to most roguelikes (in most cases for this genre characters don’t do much more than bump against one another to attack), but the presentational trade-off is worth in. The hero explores quickly, anyway, so it’s not like this is a slow paced game either.

Adventure Bar Labyrinth was initially a free-to-play game when it was released on other platforms. The microtransactions have been removed for the 3DS version of the game, but some of the legacy there remains; there are points where it will feel that the game wants to throw microtransactions at you. Unlike Battle Cats Pop, which is another free-to-play game that went premium in the transition from mobile to 3DS, Adventure Bar Labyrinth doesn’t simply compensate by giving you (effectively) unlimited premium resources. You’re just going to have to accept that this one isn’t as balanced as other good roguelikes. It’s never enough to be a complete roadblock to progress, but there are moments that will likely prove frustrating to some. 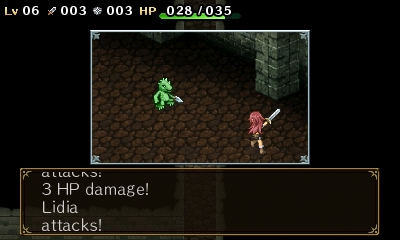 Again, I have to emphasise that the core gameplay loop in Adventure Bar Labyrinth, as it is in all roguelikes, is a lot of fun. The randomisation helps to keep the experience feeling fresh, and in starting out at first level with each attempt, you also get to enjoy that classic JRPG journey of guiding a character from utter weakness to being powerful and well resourced over, and over again.

That journey is one of the core reasons that the roguelike JRPG genre has been so enduring over the years, as the rags-to-riches adventure tale is a timeless one with universal appeal. The genre has been able to tap into this to make it the core feature, and while we’ve seen better and more creative applications of that feature in the past, Adventure Bar Labyrinth is a solid, vanilla, example of that appeal.

On Shining in the Darkness, the forgotten dungeon crawler