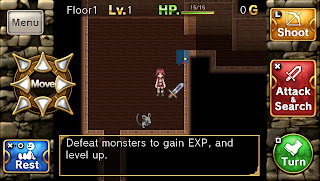 Last year’s mobile-exclusive RPG Adventure Bar Story wasn’t the finest example of the genre, but it had a charm about it, in no small part because the game’s scenario was written by Shinichi Yoshiike – a minor legend in Japan’s game industry for his work on the Atelier series, amongst other titles.

Adventure Bar Story Labyrinth is a continuation of Yoshiike’s world and characters, overlaying a very standard Roguelike dungeon delve. It’s a direct sequel and so fans of the first game should love revisiting the concept, but the game itself is fundamentally different and in most ways superior.

As with most Roguelikes, players get one shot at a randomly-generated dungeon. Each time they enter at level 1, with no equipment to speak of, and are tasked to try to get to the very bottom. Each level is more deadly than the last, with more powerful enemies and traps lying it wait, but this is offset by better loot to be found. 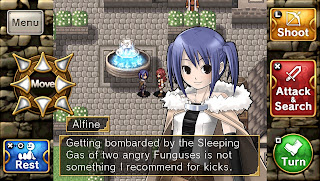 In most cases however players will fall short of reaching the deepest reaches of the dungeon. An enemy will get lucky, or a series of traps will sap the hero’s health and eventually they will fall. At which point it’s back to the very start of the game, with the hero’s level set back to 1, no equipment to speak of, and a new dungeon layout to manage.

Eventually there’s some limited ability to save the most useful or powerful weapons for a later run at the quest, and unique to Adventure Bar Story Labyrinth is the ability to pick up food ingredients within one run of the dungeon, which can be cooked at the start of a subsequent quest for a minor boost. Making clever use of these two features to slowly build your resources through failed runs is critical for that final major push to try and successfully reach the bottom.

As with most Roguelikes this is the very ultimate grind, and players with minimal patience for these kinds of things will quickly find themselves frustrated, but for those that don’t mind the work the sense of reward as you start to make progress through the game is compelling. It’s a difficult slog, and it’s not made much easier by a visual style that might work on the Android devices it was built for, but looks horrible blown up on the Vita screen, but once you do get hooked on the formula, it’s irresistible. 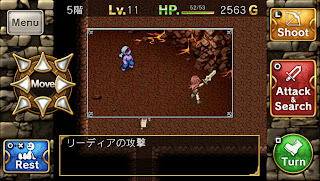 As a free-to-play game there is naturally some monetisation at work in Labyrinth, and I must admit that I am disappointed with how extensive it is. Players can buy premium currency, or crystals, with real money, and then use this money to either revive themselves should they fall in battle (pretty handy if you’re in the middle of a great run and got unlucky), or buy premium items.

Both of these tend to be expensive in terms of gems, and so the potential for Adventure Bar Story Labyrinth to become a very expensive game is high; especially when the lower levels of the dungeon are insanely difficult without the premium items.

Personally I would have been happy just going into the game and working on getting a top score. A game like the classic Nethack is nearly impossible to complete, but the game provides a score based on monsters killed, experience and loot gained and dungeon level delved, and because of that it doesn’t really matter whether you’re able to finish the game or not because getting a top score is reward in itself. Unfortunately Adventure Bar Story Labyrinth does not include a top score leaderboard and so reveals its greatest weakness – the only way to enjoy this game is to try and complete it and the only realistic way that most people will be able to complete it is by shelling out more cash than a PlayStation Mobile game is realistically worth.

Given that there’s Tokyo Jungle Mobile available on the PlayStation Mobile store for just a couple of dollars and does feature a Roguelike-like experience with an endless mode and score chasing leaderboards, it’s hard to recommend Adventure Bar Story Labyrinth’s relatively expensive approach to the genre.

But with that said mechanically the game is sound and it’s a charming enough concept. It’s also good to see the PlayStation Mobile store get some support from games with budgets greater than a few dollars.

Is it just me, or is Drakengard 3 more like Nier 2?