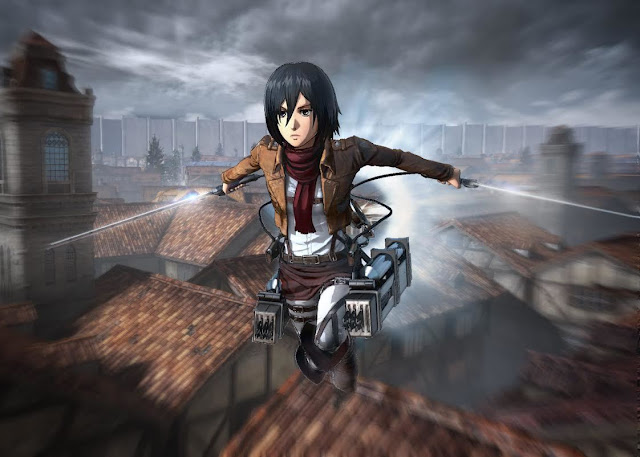 Koei Tecmo has proven that its Warriors formula is incredibly versatile, and can be applied to most anime. The success of this strategy has seen the likes of One Piece, Fist of the North Start, Arslan and the upcoming Berserk, and many of those games have been fine indeed. However, that same formula was never going to work for Attack on Titan.

Where those other games feature enemies that work as hordes, thus enabling the Warrior’s philosophy of “one versus many”, the Attack on Titan manga and anime throws relatively few enemies at the heroes, and those enemies are, instead, brutally powerful. More powerful than any of the humans, in fact. And so, while A.O.T Wings of Freedom clearly has its heritage in the Warriors series, this puppy plays very differently indeed, almost inverting the “one versus many” core concept, and it does so to interesting results.

I would argue that this is one of the most difficult action anime or manga franchises to tackle in recreating for the gaming medium, in part because what we expect from the games we play, and the narrative thrust of Attack on Titan, are so completely at odds. In Attack on Titan, the “good guys” – humans – are completely outclassed by their opponents, the massive, twisted, horrific titans. Huddled behind great walls that ring the world’s final city, the franchise’s epic narrative arcs kick off with the titans finally break a long peace, knock down the first wall and invade, devouring the people as they go. 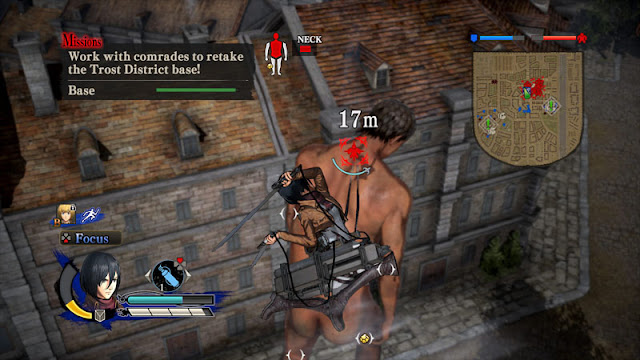 What passes for a defence force for the humans is a small unit of highly trained soldiers that are equipped with a special set of grapples and ropes, which they use to swing themselves into the air and attack the titans from above. They do this because the creatures have a single weakness; the nape of the neck. In the anime the humans continue to find a way to keep humanity alive (not least because leading man, Eren, discovers the ability to transform himself into a titan), but the narrative’s habit of highlighting unrelenting brutality, as well as the fragility of the humanity, makes for an intensely grim experience.

A game based on this grim scenario really should strip agency away from the player in order to properly reflect the horror of the situation. In order to really capture that desperation and fear at the lumbering titan monstrosities, an Attack on Titan game really needs to leave players feeling hopeless, and genuinely intimidated by the kind of beasts that they’ll be facing. They should feel like a single mistake will cost them their character’s life, because the titans are ruthless killing machines. Attack on Titan games should make the Souls titles look like a cakewalk, in other words.

A.O.T doesn’t do that, but it does succeed in being genuinely challenging. The game is split into two core systems – travel and combat. In travel, players need to use their ropes system to propel them around the battlefield at speed. Environments are very large, and pressing objectives simply won’t wait around for the player’s character to wander around on foot. A good horse can help get around in a limited capacity, but I found it far more practical to simply make like Spiderman and swing around the place. This feels really good, actually. It’s easy to build up a nice rhythm in moving around the world, and there’s a grace to the movement, which is a nice contrast to the grisly chaos of the combat. 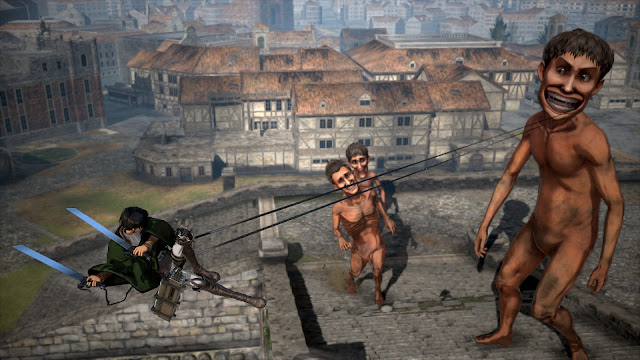 Combat – the second system – is a little more complicated, but it’s tense stuff. The player first needs to hook their ropes around an enemy, and then select a part on the titan’s body that they want to attack. While the enemy can only be killed by getting it in the neck, it’s difficult to get an open shot at the neck without first removing the titan’s legs, and protecting yourself from counter attacks by getting rid of the arms. You’ll need to work quickly, as detached limbs regrow, but eventually you’ll get a shot at the neck, and that’s when you need to hit the thing as hard as you can to try and take it out quickly.

It sounds simple, but with the titan actively trying to get a shot at you (and for their size, they are fast), and the fact there are often going to be other titans around, trying to dismantle these things can be challenging indeed.

Eventually, other features get thrown in for a bit more variety. Every so often there will be a level where you need to do something different (for instance, aiming a canon at a colossal titan), or Eren will pull his magic trick and turn into a titan to duke it out one-on-one. The latter is easily the game’s weakest point, because the brawler controls are clunky, and the scenery has a habit of getting in the way in the most inconvenient manner possible. Thankfully those moments are rare, because A.O.T is at its best when it sticks to the struggle between human and titan. 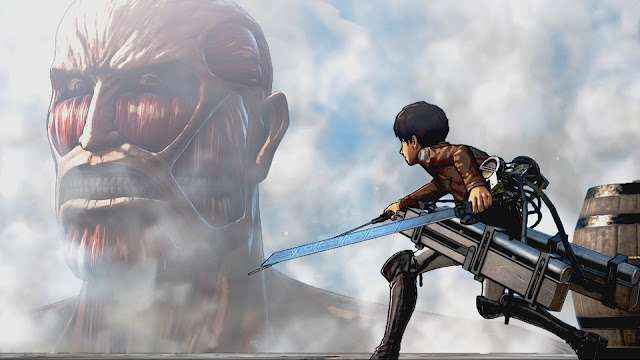 The narrative itself is, for the most part, a summary of the key events through the anime – there’s the odd additional scene, but for the most part this game has been designed to lead players through the events that, one presumes, they already loved enough that they’d want to play an Attack on Titan game. As with most of these anime licensed games I cannot imagine there will be much of an audience that hasn’t already watched through the Attack on Titan anime, but nonetheless, I’ve never been a fan of games assuming knowledge, and would have much preferred an original story in the Attack Of Titan universe that could have been explored at greater depth.

For players that haven’t seen the anime before, you will still be able to follow along, vaguely, but you’ll struggle in other ways. For instance, there’s a lot of death that goes on in this game, but because the characters don’t have time to develop, it’s hard to feel the required emotional connection to them.

What Koei Tecmo doesn’t hold back from, however, was the violence. Your hero will start a level out clean, but it doesn’t take long for him or her to get covered in the gore of the titans. Those creatures, meanwhile, with their misshapen, monstrous visages and awkward movement, are every bit as loathsome as they need to be to gain a visceral thrill from driving a blade into their neck. 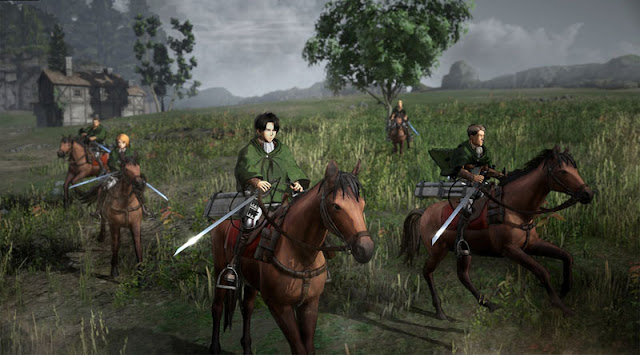 Putting aside the xenophobia and nationalism that Attack on Titan actively encourages for a moment (attitudes that are certainly of political concern in Japan), the core story of the anime is quite powerful. Because humans are facing an existential crisis, we get to see the best and worst of humanity rear its head; the corruption of the social elite and the wealthy is a powerful contrast to the heroism of the soldiers on the front lines. Depending on how you read it, it could be a little too Triumph of the Will for its own good, but the human stories within it are what made the anime really powerful.

This is why it’s a little disappointing that the game didn’t do more with its narrative. Without that context trying everything together, the characters and scenarios just don’t have the same impact that they should. It’s just as well that the gameplay is so slick and refined, then. You’ll be genuinely challenged by what’s on offer in A.O.T, and there is most definitely a strong sense of satisfaction from slicing through the monstrous titans. Given that this is the first attempt at a very different kind of game for Koei Tecmo, I’d say that Attack on Titan franchise is in good hands going forward.