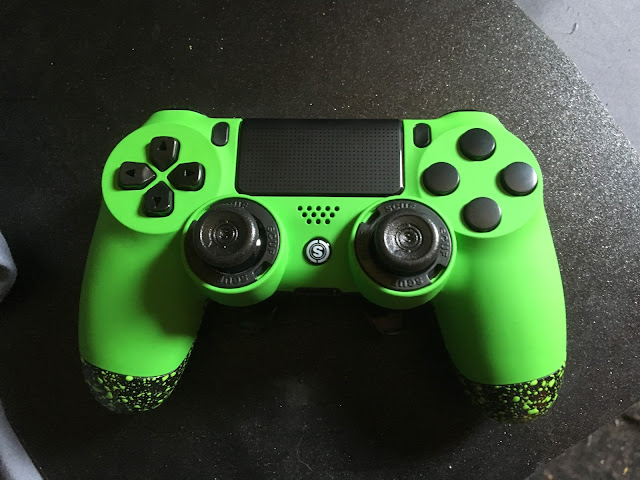 Custom controllers designed to provide competitive players with an advantage are hardly a new thing. I recall all too clearly the first time I used an NES Advantage with its big, arcade-like joystick and turbo option for rapid fire button presses. That being said, controllers have taken on a number of different shapes and sizes in the years since, and the SCUF Gaming Infinity 4PS is about as sharp as a competitive controller comes for the PlayStation 4.

Related reading: Nick’s review of the SCUF Infinity1 controller for the Microsoft Xbox One.

The number of options available with the Gaming Infinity can be almost overwhelming. Of course there are the cosmetic things such as colours or patterns you want, but SCUF gives you control over a lot of other features as well. I have a very sharp SCUF controller for the Xbox One already, customised with Call of Duty in mind. I decided to do something similar with my PlayStation 4 one as well, building it out with a variety of different options and then using it very heavily to see how it holds up, how the controller feels in my hands and whether or not I felt the options did me any good.

To start, I picked a rather bright and colourful Hulk green for the first step. I had a control disc on my Xbox One controller, and while I liked it well enough, I simply opted for the sticks with no disc. While focusing on the sticks, I went with the regular length (I know some people prefer one shorter and one longer for movement versus aiming, but for me regular length has always just been more comfortable). I chose the concave tip. I have never been a fan of convex – I don’t care for that feeling that my thumb might roll/slip off of the top of the stick, where as the concave allows the pad of my thumb to nestle into the stick comfortably and securely. I also chose the black kit for the face buttons. This gives the controller a nice, clean look as they almost mirror the directional pad’s appearance on the left. It’s not ideal if you are someone who has to look at the buttons to remember which one is which, but in my case I could probably operate a controller in my sleep regardless of system.

I wanted the option to remap the paddles with the electromagnetic key. While the defaults are fine (representing the X button on the left and O button the right), and what I use anyway, because there are only two paddles and not four like the Xbox One controller, I thought it would make sense to allow myself versatility. Having used and tested the remap feature, I can say it is pretty easy to do and works flawlessly.

The fifth step in the customisation process is the SCUF trigger system kit. This allows you to mechanically tune the tension and position of the triggers to suit whichever game you are playing. The trigger stops allow for quicker firing, which is useful for non-automatic weapons in shooters where rapid fire pulls can be the difference between getting shot or shooting the other person. It is, however, useless in a racing game where you might need to pull down on a trigger for a sustained period of time, and this is where the ability to adjust these settings allows the controller to be more versatile. Since I was configuring this for Call of Duty, I opted for quick trigger setup. I also got this with trigger extenders. They are removable, but firm when attached. They claim to improve trigger accuracy, though I did not really note any difference for myself personally when using them versus not, but from a comfort standpoint I appreciated them as I have rather large hands that can sometimes envelop a small mouse or controller. 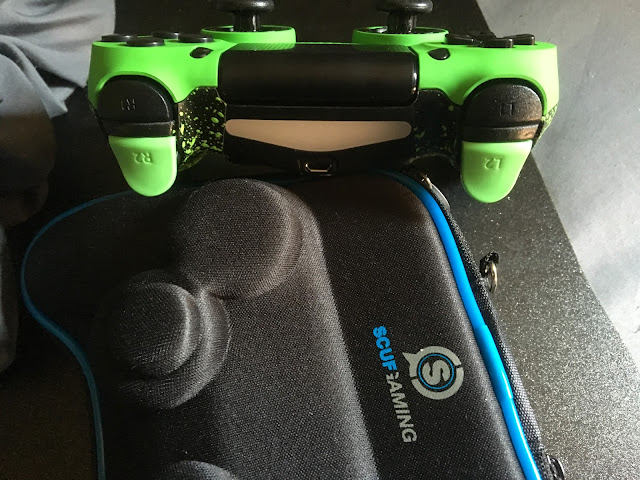 I opted for the SCUF Pro Grip in the colour green, which nicely matched the rest of my controller and gave my palms a comfortable rubberised/non-slip surface with a faint texture to it that helps keep the controller right where it should be. While I am and have been a big fan of the DualShock controller over the years, the back surface can get a little slick during prolonged/intense gaming, so this surface was welcome. They also included GamerGrip, which is an antiperspirant for your palms. I don’t get as much use out of that personally as my son does, but he absolutely loves the stuff. Last but not least, I chose to leave the rumbles in (I’ve never been a fan of making my controller less functional). The theory is that rumble makes the controller heavier and the shaking motion can detract from accuracy, so I can see the logic that some would want to do away with it has a hardware feature.

So that is the breakdown on how I chose to build out this particular controller. I decided to do my testing in two parts – myself and my son. While I am a fan of shooters, they are not my go-to genre. On the flip side, my teenage son enjoys his competitive gaming and finds himself on FPS and the MOBA genre most frequently. Not only is this a good test because of our different skill levels and game preferences, but hand sizes too, since he is nearly a half foot shorter and a hundred pounds lighter than me despite being seventeen.

Both of us really liked the feel of the controller. He went for the GamerGrip immediately, which to its credit doesn’t gunk up the controller. I let him go first so I could see if it left any kind of paste-like residue on the area my palms would come to rest, but I didn’t notice any. I’m sure over time there will be some film to get off of there, but the same can be said of dirt and sweat accumulation too, and this is no worse than that.

As for the actual comfort of the controller, he actually liked this better than our Xbox One controller. That makes sense, because his hands are smaller than mine and the PlayStation 4 controller is lighter and smaller than the Xbox One version’s. Both sticks were super responsive, and all of the buttons and triggers were appropriately springy and responsive. In FPSers, my son tends to use semi-auto weapons, I tend to spray and pray with fully automated, but tweaking the triggers to suit our preferences was easy. He did miss having four paddles on the underside, which we have on the Xbox One controller. I use the paddles some, but he has gotten really, really good with them and said that these ones were responsive, comfortable and while he wished there were four, he said that X and O were his primary face buttons used anyway and that he absolutely feels as though they give him a competitive edge.

Despite hours of use, adjustment and being passed back and forth between two different players over a week’s time, there have been no durability concerns to report. The sticks are perfectly centred, all of the buttons and triggers are still at peak responsiveness and there is no separation on any seams (something I have seen on lower-end controllers in the past, even after just a week of work). Everything has held together quite nicely. The battery is a traditional PS4 controller one, so longevity is exactly what you would expect, and the controller even came with a nice braided connection cable to the PS4 USB port and with a firm but padded case for storing the controller in when it is not in use. 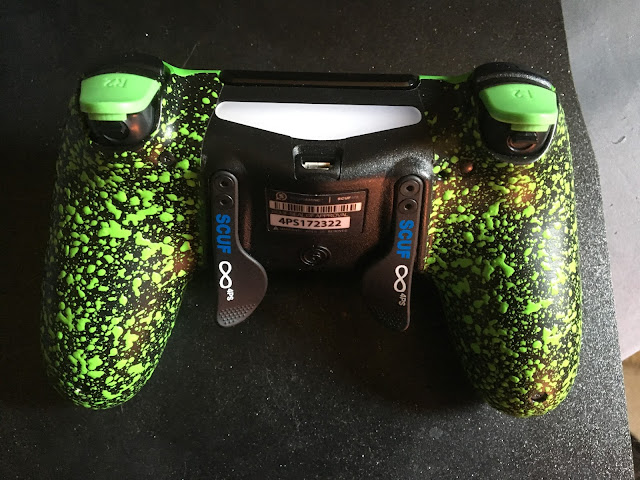 Because of the numerous customisation options available for this controller, if I had any issues with how I designed it, that would definitely be on me. However, I have to say I was really very happy with the end result. If I am comparing it to the Xbox One controller, I do slightly prefer that one due to the extra paddles and the slightly more comfortable girth of the controller. My son also misses having four paddles, though he loved the weight and fit of the Infinity 4PS in his hands and says that it is hands-down his favourite controller yet for any system. It comes with some really nice extras and is clearly a well-designed controller that comes at a very premium cost.