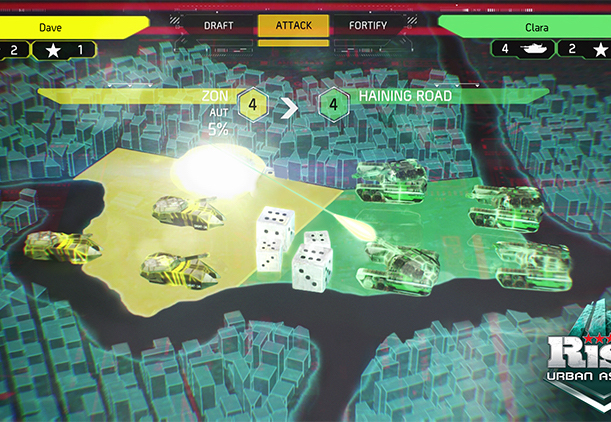 My relationship with the classic board game, Risk, is a complex one. On the one hand, I do love the game on principle; it’s a board game, and I like board games. As social platforms to engage the mind, I believe that board games fulfill a valuable role in society, and should be encouraged, regardless of the form they take.

Related reading: Matt’s review of the original Risk on PlayStation 4.

On the other hand, Risk is a gratingly irritating example of a board game at times. It’s a classic, of course, but as with so many other classic board games, success is determined as much by sheer luck as it is good play. In Risk, the dice rolls rule supreme, and there is very limited means to counter the effect of poor dice rolls. Consequently, the poor bugger that starts off with a few shoddy rolls can give up any hope of being competitive in Risk; while the game itself might wear on for hours, the likely winner is determined within the first half hour.

Risk: Urban Assault is a skinned version of the classic game, with newly designed maps to represent conflict in individual cities, rather than the global warzone that vanilla Risk offers. There isn’t much of a difference in effect, though. Play on the Shanghai map, for example, and the city is still broken up into regions, and you get an advantage if you’re able to dominate connected sections of the map. In vanilla Risk, occupying North America, for example, earns you additional forces each turn and gives you a substantial leg up. In Shanghai, occupying the northern segment of the map does the same thing.

Waiting for the census has got me so bored I’m playing Risk #censusfail #PS4share https://t.co/WWlk3OzGdy pic.twitter.com/0dvfRWOsZv

For those that haven’t played Risk before, the game is simple and takes about five minutes to learn. You start each turn with an allocation of military units, based on how much land you occupy, and whether you’ve earned complete domination of any of the regions. You use those resources to increase your power in territories that you own, and then use those territories to attack your opponent.

Combat could not be more simple; both players roll dice, based on the number of units they own. The side that rolls higher wins, ad the loser removes units to reflect that loss. This utter simplicity is why Risk is a game that everyone can understand and play, and also the game’s fundamental failing; careful strategy is rarely rewarded. Rather, the only effective tactic is to brute forcing your way through until you’re in possession of these regions, which then gives you more resources to brute force even more effectively.

The context to all this is that board games are going through a real renaissance at the moment, and their popularity is being driven by a real de-emphasis on the power of luck. Those classic games that were once found in every household; games like Monopoly, Risk, Mouse Trap, and Game of Life, in which dice rolls determined everything that happened in the game have been superseded by what we term as “Eurogames” – games in which dice are either eradicated entirely, or the impact that they have greatly reduced. 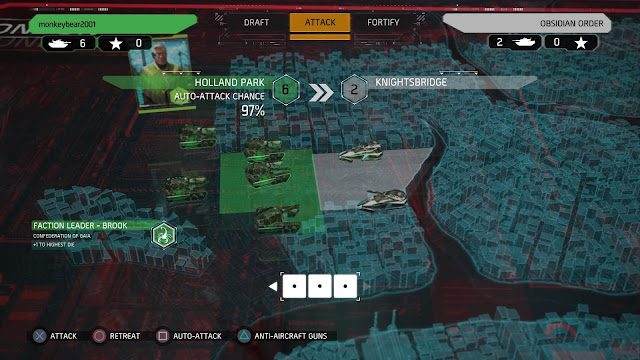 Popular titles now are games like Catan, Agricola, Power Grid and Puerto Rico; these games are highly strategic, but far less luck-orientated; rarely will you come away from one of these games feeling like you’ve been denied a victory because of the dice roll.

Now, in fairness, Urban Assault does try to deepen the experience somewhat to enable players to stack the odds in their favour in those dice rolls. It’s possible to build technologies that help modify dice rolls, and each player has a commander, who can have a range of different abilities that can make winning very difficult for the side that doesn’t field a commander. These new rules do add much-needed depth to the base Risk game, but it’s still too limited, and I’ve come away from a few games feeling like I was being shafted by the dice roles.

In presentation, Urban Assault is quite nice. The basic graphics engine is the same that we saw in the previous Risk game on PlayStation 4, with hologram-like tanks rolling around and firing at one another. The visual impression is that we’re in the command war room, watching our movements play out on a map from complete safety, as modern commanders do. This game even includes something of a story mode and campaign, and while it’s not going to win any awards, it helps to give context to the experience, especially for those who expect to spend some time playing this in single player. 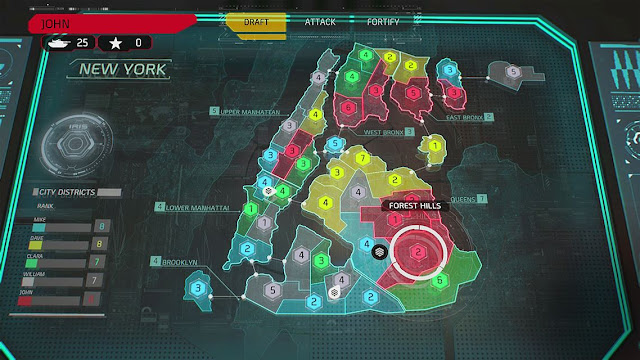 Ubisoft has done everything it can to dress Urban Assault up and give fans a reason to dip again, even if they already own vanilla Risk on their PlayStation 4s. The game itself is a quality take on the board game. It’s just unfortunate that there is such structural issues with Risk itself that it’s rapidly losing relevance, even in the board game scene. I would like to see Ubisoft turn its development skills here to give us a really killer console adaptation of Catan, or Agricola, or Ticket to Ride, or similar.

Dead or Alive 5: Last Round kicks off a fifth season of DLC costumes today