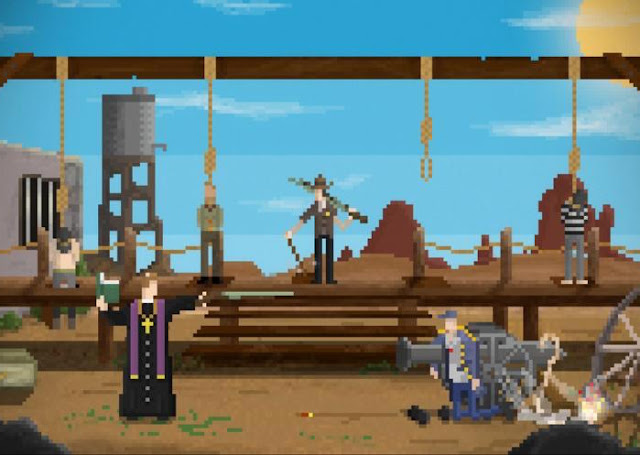 It almost feels trivial to write about Western Press, a game with such a short runtime that you could feasibly finish a dozen rounds in the time it takes to read this review. A one-on-one twitch multiplayer game developed by Bandit-1 and published by Aussie favourite Surprise Attack Games, Western Press aims to be the most historically accurate Wild West duelling simulator ever made (probably) and challenges your hand-eye coordination more than anything else I’ve ever played before.

Related reading: Reviews of some of the other Surprise Attack-published ultra-indie games that we’ve reviewed.

In Western Press, a stream of twelve button inputs is given to you and you need to hit all of yours in order before your opponent finishes their stream. Then BANG, the winner’s avatar shoots the loser’s avatar and we move right onto the next round. One game of Western Press lasts all of four seconds, making this the fastest turnover in a competitive multiplayer game ever. Perfect for the gamer without a lot of time but still wanting to prove they’re better than everyone else. For the more cognitive of players Western Press also offers a Simon Says-style game which relies both on memory and reflexes, so a person who wins in the first game mode might be outmatched in the other.

Western Press features a short single player campaign, an online multiplayer component and local multiplayer. Single player seems almost like an afterthought, which is fair enough because it makes no sense to play a game like this against a computer which can feasibly enter all those inputs in a fraction of a second. To their credit, the devs have implemented a progressively stronger series of AI behaviours which are surprisingly lifelike – they will make mistakes occasionally and behave almost exactly like a human player would. You face off against increasingly powerful opponents arcade-fighting-game style until you emerge the victor. 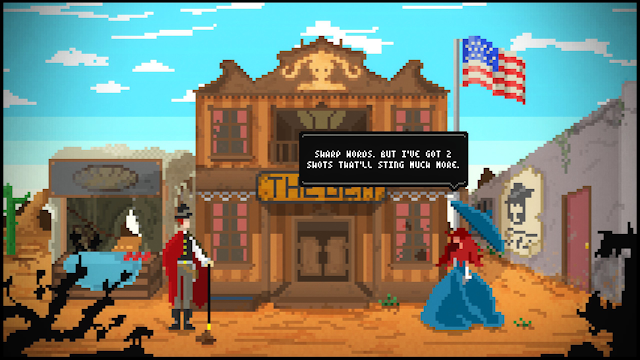 The comparison to fighting games is also apt in that Western Press offers an eclectic variety of playable characters in the same vein of the vague-stereotype style that Street Fighter pioneered. It’s the Wild West but we have everyone from the sheriff, bandits, a Native American, a Chinese kung fu guy and an outlandish British Colonialist. There’s a joy and lightheartedness to every character that necessitates their existence even though none of them have any effect on gameplay whatsoever, and the developers have even integrated Steam Workshop support so that there are no limits to creativity (and of course, giving players the ability to be creative has delivers, so far, little more than memes). It’s unfortunate that these characters don’t get more than a couple lines of speech in game, because there’s opportunity for a crazy fighting game style story mode here which isn’t explored. How about a visual novel where the story changes based on whether you draw your gun faster than your opponent? Please get on that, Bandit-1.

The big advantage that Western Press has over fighters (and most other multiplayer games for that matter) is that it’s instantaneously understandable. Nearly every multiplayer games has quirks, metagames and some even with an entire lexicon that is a huge barrier of entry to new players who want the joy of competition but don’t have the time to read the prerequisite encyclopedia of strategy in order to play competitively. Like Divekick before it, Western Press is oversimplification at its best, teaching players how to play without even a tutorial screen; it’s built right into the interface. Functionally it’s almost identical to the combo-ing portion of a fighting game. The main downside is that there isn’t any depth or strategy, although players do get perceptibly better with practice, although the competitive experience is very well designed to feel fresh even though it doesn’t offer much beyond hitting buttons quickly. This is carried by a well-designed 8-bit art style that manages to establish both character and place to the Wild West represented in game. Environments are varied and a joy to look at, and every character has their own little animations which have no effect on gameplay but are good for a quick chuckle. One character can be shot literally out of her boots, while another wields a literal cannon.

The best part of Western Press however has to be its tournament system which allows for easy creation of brackets that works both online and in local play with only one screen. An entire tournament might not last longer than 20 minutes, but Bandit-1 have taken all the stops to ensure that the framework is top notch anyway. It goes to the testament of Western Press’s competitive design when, and I swear I’m not making this up, it’s a thing in South Korea right now! 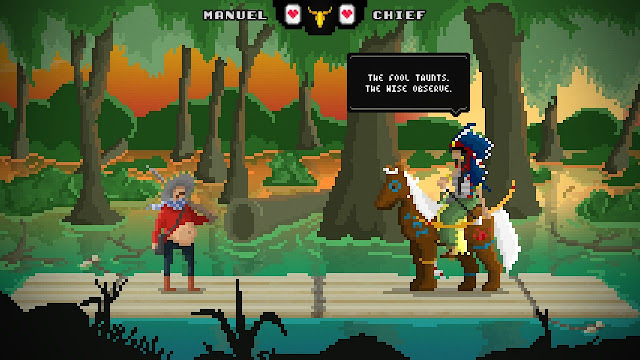 Western Press is a tiny game and it even requests its audience to “lower your expectations”, but it still manages to do a lot of things right. What Western Press understands to its core is that no matter how arbitrary the task, direct competition is intrinsically fun. It’s a game which you need to be playing in person to understand, but it’s like Rock Paper Scissors or Speed: it really shouldn’t be as fun as it ends up being, but works on the basis that someone wins, another person loses and it doesn’t take long to see which is which. Let’s be honest here, Rock Paper Scissors is just random chance and Speed is just sorting objects, and both have endured the test of time. Western Press is a silly game, but there should always be a market for silly games, and at a discount price it’s great for a laugh between friends.