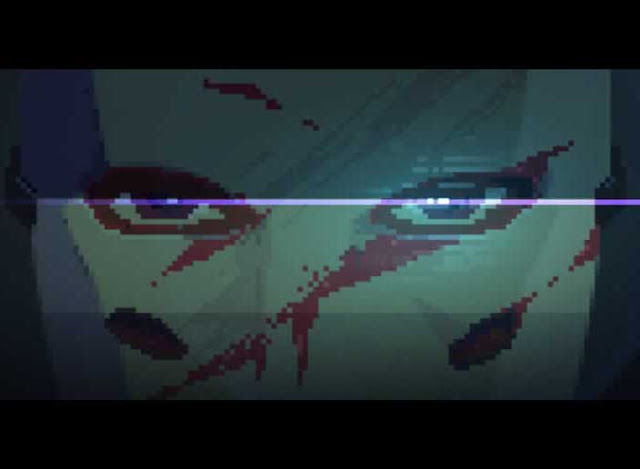 It’s 3AM in the morning you want nothing more than to get some sleep, but it seems your neighbour thought it was a good night for a party. They will soon regret having a party. You throw on a mask and grab a knife and set out to shut them up once and for all. After killing all people at your neighbor’s party you decided that you’re actually quite good at this killing business and you set out across America going from party to party and taking out anyone who goes to them.

(Editor’s note: We’ve all been there. Neighbours are the worst. Talk about a game of wish fulfillment)

A level in Party Hard is a single screen with about 30-50 victims to kill in various ways. Scattered throughout a level are traps and places to hide bodies. The traps range from setting an oven to explode to pushing victims into a fire. Almost all the traps can be used only once, so the most common way you will be killing is to stab your victim with your knife. Killing while another person is in view or if they find a body will make them run to a phone and call the police. The police will try to catch you if one of the victims saw you do the crime but if it was only a dead body found the police will go to the body and put them in a body bag and leave. You can escape the police by running away for a while and they will just give up saying things like “I’m getting too old for this s***” and leave.

The chaos goes further. You can not kill a police officer with your knife but you can set up one of the traps to do it. Killing too many officers will make the FBI come and they will keep searching for you and the first sight of you, they will take chase until they catch you. Other emergency agencies make an appearance, such as firemen and EMS. It’s really quite distressing how much work it can be to engage in a bit of healthy slaughter. Firemen will put out any fires, while EMS workers will either put dead victims into a body bag or pick them up and bring them to the ambulance. 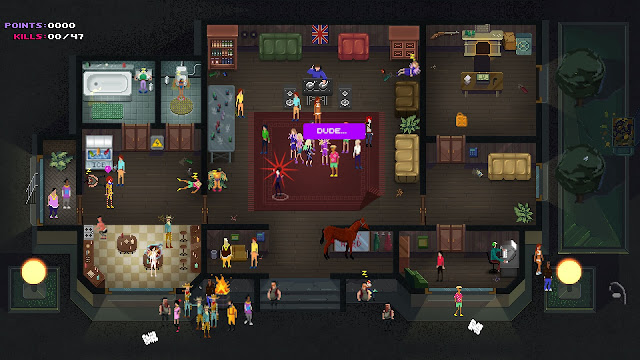 In a level, you can sometimes find items that can be used. I found such handy items as a sword, a stun bomb, a smoke grenade, and a bomb. A sword will allow you to kill more than one victim at once when at close range, a stun bomb will put any victim near it to sleep, a smoke grenade will make it so anyone in the smoke can’t see you kill, and the bomb will blow up, killing anyone near it. Using the bomb, however, will call in a SWAT team. So it’s not as useful as it might sound. Each level will set up the traps in a semi-random way but other playing each level so many times you will see they repeat a lot, so in practice there are only a few different layouts for each level. Some other things that can help players out is by making a phone call which can call in another killer, a bodyguard who will kill any cops trying to get you, or a guy who will give you a weapon.

The punk anarchy attitude that the game makes its central theme, as well as its top-down viewpoint, is surely going to remind most people of Hotline Miami immediately, only with smaller levels and fewer weapons. Even the soundtrack is reminiscent of that game Hotline Miami. After each of the main levels you will be treated to a short cutscene that is surprisingly fully voiced (and the voice acting wasn’t half bad). The story is told by John West (does he catch tuna? – ed.) a cop who is going after the Party Hard Killer. The scenes play out almost as if West is being interrogated by someone but you will soon find out more about the story, and it’s worth experiencing for yourself, so I don’t want to spoil anything. The story has a few plot twists that sadly are easy to see coming. It also sometimes felt they added swearing into the story just for the sake of swearing. It’s a strange criticism to make of a game that is about going on bloody rampages because people are simply not being polite enough, but a bit of restraint helps to keep people on their toes; go too far over the top and people will simply become desensitised, and then bored.

While playing I ran into a few glitches. One was on a level when you can throw someone off a building or boat. If you carry a dead body or drunk person and hit the button to throw them over they will stand up and stay there until you go over and push them again. This happened to dead bodies too. One other glitch came on the last level where one of the victims are invisible and in no way do you have any idea where he is standing. I had to look up how to get through this bit, and that makes me think this game was not ready for a full release; beyond the glitches there’s simply too much of a sense that this one is still in a state of “early access.” 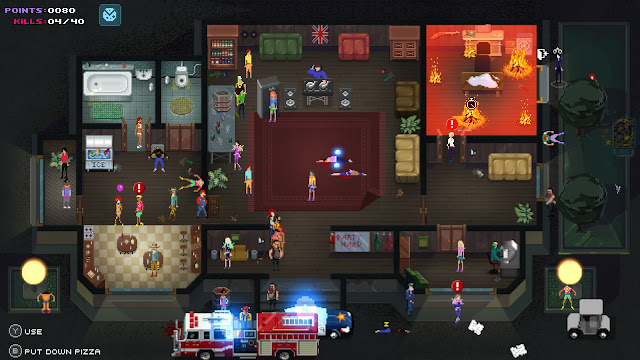 There are hidden characters to unlock but they all seem harder to use than the original character. After beating the game you also unlock hidden levels but again these all felt like more of a pain to complete where they should have been more fun. The biggest problem the game has is that it fights against its own urges. It so desperately wants to let people simply cut loose and go on a comic, silly, but brutal and confronting massacre. But then it hoists so many rules on the player that they’re too busy fighting with the game to do what it really wants them to do.

Overall it’s hard to recommend this game as it feels unpolished and very repetitive. I went in expecting some dark humor but it turned out to take itself too seriously as a game to do that. Herein lies a lesson for developers that want to tackle really transgressive topics, and to quote the eminently transgressive Robert Downey Jr. in Tropic Thunder: You never go full retard.