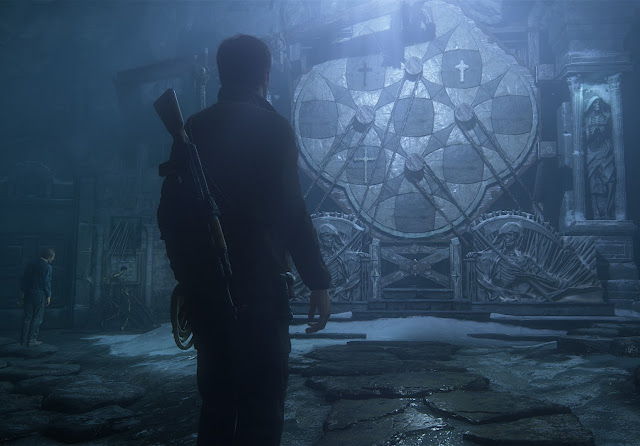 Uncharted 4 has got to be the most irritating game I have ever played. I recognise that on every objective measure you could apply to it, it is a well-made and highly engaging game. But it also represents the pinnacle of AAA game development, and therefore for all that budget thrown at it, that means it ends up ringing hollow and often really quite shallow.

I’m going to assume that Uncharted doesn’t need a substantial introduction by now – surely anyone interested enough in the series to be reading this has played at least one of them before. Naughty Dog’s marquee franchise channels Indiana Jones in its entirety, taking a hugely likable and roguish protagonist, Nathan Drake, and sending him around the world so that he can break into ancient, crumbling buildings, crypts, and other spaces of antiquity in the hunt for treasure.

This time around he’s on the hunt for a massive pirate treasure. The plot of Uncharted 4 kicks off in the past, as Drake, his brother, and an associate deliberately place themselves into a prison in Panama to give them the opportunity to track down a massive score of gems and gold. Unfortunately all they find is a clue to the next location, and then, in their escape attempt, Drake’s brother is shot, and in their hurry to escape, the other two leave him for dead. Drake and the associate escape, and fast forward 15 years and Drake is now working on a barge, recovering scrap, and is married and happy. 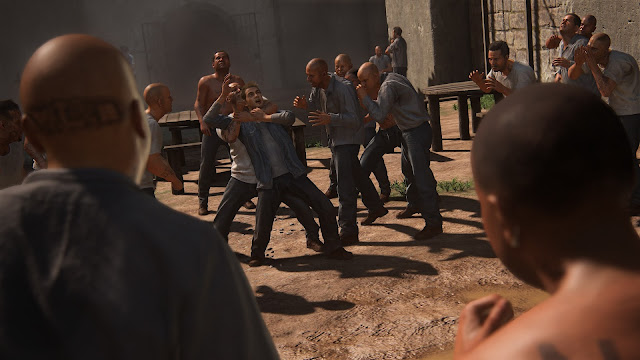 But then the brother turns up. He actually survived, and a gangster helped him to break out of that prison where he has been left to rot, 15 years later, before putting an ultimatum on him to pick up the search for the pirate’s treasure or risk far worse than death. Naturally he goes to Drake to help, and off the two go on a new adventure.

Unfortunately Drake’s associate never gave up the hunt for the loot himself, and, frustrated after 15 years of searching with no luck, is now directly, violently, opposed to the brothers in a race to the loot. Because this is an Uncharted game it just wouldn’t be the same if there wasn’t an opportunity for big shootouts.

Without giving away any more of the plot, Uncharted’s narrative is big, blockbuster, and dumb. But I don’t mean “dumb” in the sense that it’s poorly made, because the standard of the writing and acting is every bit as developed as we have seen in any Hollywood film in recent years. Drake’s voice work by Nolan North, especially, through humour and a perfect understanding of rhythm and tone, manages to be the same ever-so-slightly eccentric, but charming type that we see in the better performances of the likes of Robert Downey Jr. He’s never over the top. Nor is he a blunt instrument. His performance has nuance, and it goes a very long way in making the entire game eminently playable. 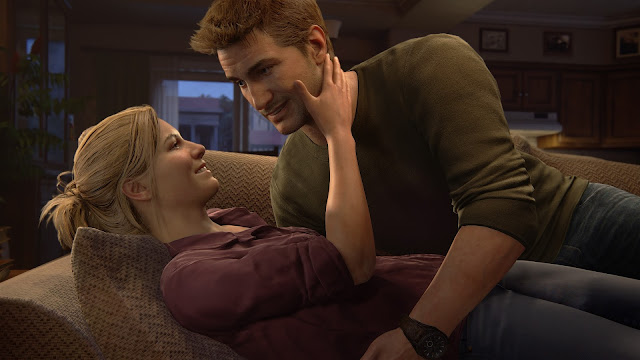 It’s also not “dumb” in its design. On every level this game drips with the money it had thrown at it. Any other game might have a brief cut scene that shows Drake, 15 years after the prison incident, working on a barge. Naughty Dog makes the entire scene playable, tasking players with tracking down missing crate boxes at the bottom of a river, and then attaching hauling cables to a truck to get it out of there. Few games would have the budget, development time, or resources to make something of small or almost inconsequential details simply to indulge in a bit of characterisation, but here in one early scene as Drake relives his earlier adventures, he gets to run around his attic with a toy gun and shoot plastic bullets at things. For no other reason than to show Drake at play.

Every scene and setting in Uncharted 4 has the kind of budget thrown at it that could easily finance another game in its entirety. A trip to Scotland looks like it could have been pulled directly from an open world game like The Witcher 3, or a brighter Dark Souls. That scene starts you out in the wilderness, and in the far distance is the location you need to get to. The promise of the journey there is almost more inviting than the expectations of what you’ll get once you get there.

And therein lies my greatest problem with Uncharted, and the reason I consider it to be a fundamentally “dumb” experience; over and over again the game promises genuine openness, only to rip that away from you, not trusting that you’ll play the game “right”. Beneath its production value-driven smoke-and-mirrors lies the same hyper-linear shooter experience that we see in so many other blockbuster games. There’s only one way to make your way through the wilderness in Scotland. That way is filled with environmental puzzles to overcome, which have only one solution, and a couple of larger areas where there are patrolling enemies to take out. Here, at least, you have the option to kill them by stealth, or simply go in with guns blazing. But that’s still just two options. And there’s no way to simply circumvent the enemies, negotiate with them, subdue them non-violently, trick them into letting you past, and so on. You’re playing the game the way Naughty Dog tells you to play it, and the inability to be creative as a player is very much at odds with the visual openness that the game provides. 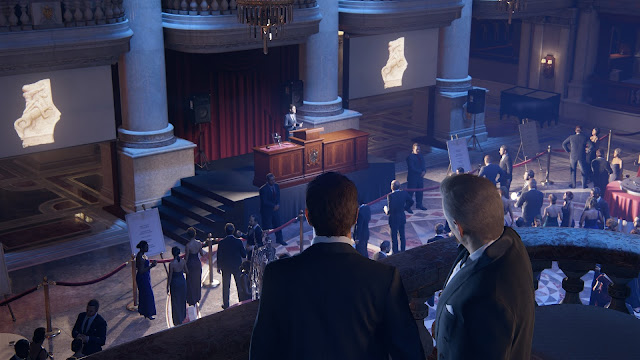 It’s a testament to just how limited and restrictive the level design is that, when I reached my objective, I was wondering how Naughty Dog managed to create the perception of great distance between myself and the objective at all. My journey there felt like it was a quarter of the length of the distance I perceived I would be travelling at the start. To contrast to Dark Souls III or The Witcher 3, where the journey was often the story, in Uncharted, all that money that went into creating epic, inviting vistas and the perception of sweeping distance then goes to waste with the journey is, at best, a brief transitionary period of enclosed combat or puzzle “rooms” before you’re hurried to the next cut scene to keep the action moving along.

Uncharted’s smaller environments suffer from the same dissonance between presentation and reality. A heist job at a black market auction takes place within a glamorous Italian mansion, and was initially an exciting stealth game proposition. The mansion is utterly massive and I was looking forward to poking around it and planning a way of grabbing the artefact without being noticed. I then discovered that there was only one path that I was going to take through this mansion and I had to play it in the way Naughty Dog wanted me to, because the only option in grabbing the artefact was to trigger a power blackout. But perhaps the most pure example of my disappointment here came when I got into a fistfight with a major enemy character. It didn’t seem to actually matter how well I played this, as it turns out, as it was a highly scripted event that would have been handled as a QTE in any other game. Regardless of how well I performed, the result was going to be the exact same cut scene afterwards. Uncharted decided to give me the perception that I was “playing” the game instead, and I think that was a mistake; if I’m the one in control then I want the consequences to how I play to be on my shoulders.

It’s fine to create a linear shooter experience. I’m one of the few people who really like Final Fantasy XIII, so obviously I’m not opposed to linearity. It’s also fine to create highly scripted events for dramatic impact. I love David Cage’s Heavy Rain, and it’s highly scripted from start to finish. The difference is that neither of those games pretend to be anything more than what they are. And when Final Fantasy XIII provided you with a large open area to explore, it actually ran with that, giving the linearity a break to allow players putter about as they saw interesting things. When Heavy Rain had sequences that did give you control over outcomes, there was in fact a difference between success and failure. Uncharted 4 is bewildering because at every opportunity it looks like it wants to give you freedom and control, and then changes its mind and almost plays itself for you. 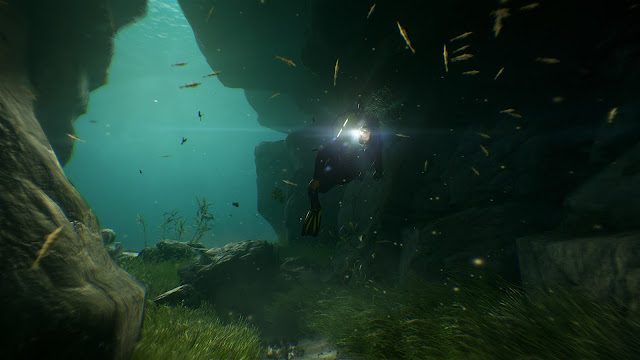 None of this is to take away from the fundamental quality of the game, however. When Drake is climbing and jumping around, the environmental puzzles, linear as they are, manage to remain varied and dynamic, both from one puzzle to the next and even within every individual puzzle. In the combat scenes, the environments are designed with utter precision to make the stealthy option possible, though highly skill-based. When firefights do pick up, enemies do a good job of flanking and tossing grenades at opportune moments to force Drake to keep moving around. The guns feel believable in the way they behave. The games industry knows how to produce visceral, exciting shooters by now, and Naughty Dog is a leading example of how it can be done well.

If the game offered nothing but a single player mode, I think people would be happy with it. Naughty Dog’s eye for detail means that it also didn’t cut corners in telling the story that it wanted to in its entirety. But there’s a full multiplayer mode thrown in there for good measure, and within the map design and balancing, I think it’s probably Naughty Dog’s best effort in this arena to date. I don’t think Uncharted will ever rival the likes of Halo or Call of Duty as a competitive multiplayer experience, but anyone looking to extend the value of their game will find it here.

In terms of giving the fans what they want, I’m certain Naughty Dog has nailed every part of the brief that it was given. Uncharted 4 shows a truly masterful eye for detail and is near perfect in mechanical execution. It’s also presented with cinematic brilliance. My issues with the game are less about it in isolation than it as representative to the broader AAA-blockbuster space. I am increasingly uncomfortable with the superficiality of these games, and the way that they work so hard to hide just how passive you are as a participant.