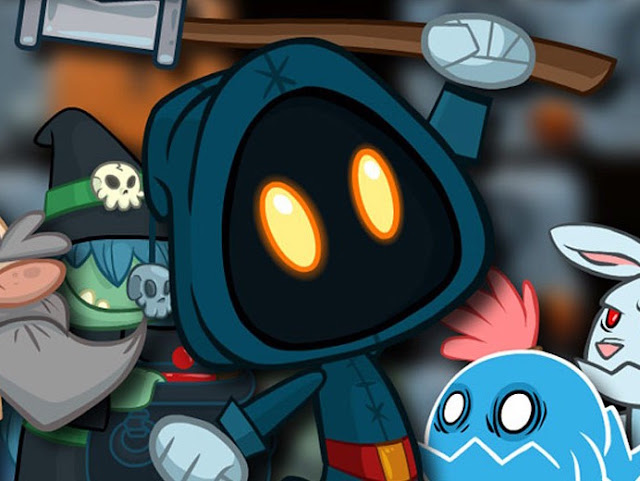 As someone who likes word games, and RPGs, Letter Quest is a natural draw right from the outset. Coupled with an appealing retro-style art style, and a light hearted tone, this is not a game that tries to do anything too crazy or innovative with its premise, and while it’s not essential, it’s also not something you’ll regret purchasing.

You play as Death, who gets up to some crazy things on his quest for nonsense. If I’m being vague it’s because I didn’t actually pay attention to the plot, which is instantly forgettable and told through static comic book panels. I wasn’t missing a major feature, mind you, because the game pushes you through these story segments as quickly as it can – almost like it only threw them in there because otherwise people might complain that there wasn’t a story. The point is that you’re Death, which means that your weapon has been predetermined (spoilers! It’s a scythe), and you’re going to go about swinging it at things.

It’s the way that he does his death dealing that’s so fascinating, for Death is something of an academic, and he fights through the power of his vocabulary. Whenever battle is joined, a grid of Scrabble-like tiles appears on the screen, and from that grid, you need to spell a word. The longer the word, and the more complex it is, the more damage Death’s attack will then do. The game recognises 192,000 words (and growing), so the verbose will enjoy showing off how clever they are by taking screenshots of brutal words and sticking them on Twitter, but combat is also balanced so that you don’t need to actually be a genius in order to work through battles. After all, “vox” is a pretty nasty word to pull on your enemy, and it’s only three letters. They just happen to be awesome, damage-dealing letters. 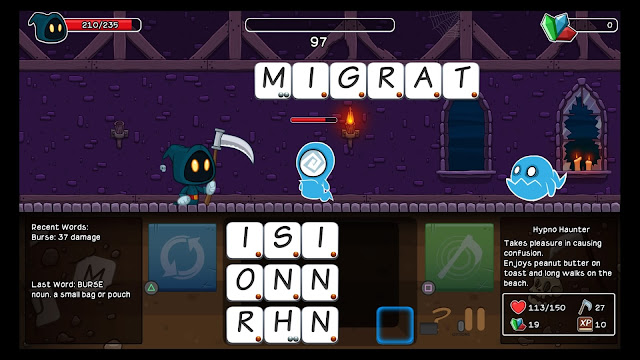 Each level in the game features a handful of battles. Most also include the opportunity to grab some loot, such as a through a treasure chest that you play a game of hangman to unlock. Between battles there’s the standard opportunities to improve equipment with cash earned from battles, and pick up some consumable items to help make life a little easier. This is a very streamlined little RPG in terms of how it plays, and that makes it very easy to play in short bursts. You’re likely to feel like you make some meaningful progress every couple of minutes, which might make Letter Quest better suited to mobile platforms than a console, but that’s being picky. The game plays perfectly well on the big TV, and it’s an easy time filler between more intense games.

Though individual levels are over fairly quickly, there is a lot of them at 70 or so, and each level can be tackled in a couple of different ways in order to earn bonus “stars” on the way to 100 per cent completion. There’s a time trial mode, which forces you to spell fast. Another limits the number of words you can make, and therefore forces you to think big in terms of the words you come up with.

Enemies have a habit of complicating things, too. Some enemies will hit you with a special attack that makes letters on the board useless. Others will ‘poison’ tiles, which means you’ll take some damage if you use them. The natural response there might be “well, okay, I won’t use those tiles,” but when the one ‘E’ on the board is coloured that sickly green, you might have no choice there. 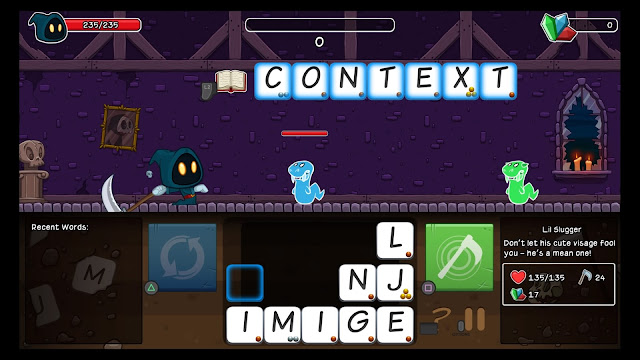 By about the mid-way point you’ll be thinking very carefully about every word, and second guessing yourself about whether the word you’re going with really is the best you can come up with. Boss battles tend to be especially challenging, and introduce truly nasty conditions that might force you right out of your comfort zone. The first boss, for example, doesn’t take damage from three letter words. That ‘vox’ that you’ve been relying on for the cheap kills just got rendered useless.

The best feature of all, however, is the endless mode. There you’ll simply be fighting wave after wave of enemies and trying to survive for as long as possible. Given that the main game doesn’t actually have much of a narrative, this survival mode is the appeal of Letter Quest distilled into its most pure form, and it’s addictive stuff. Especially when you realise that you could have done better had you been just a little more creative with your wordplay.

This is a strong debut by developer Bacon Bandits, and while it looks quite simple, the balancing of a game that relies so heavily on the randomness of letter tiles to form its core mechanics can’t have been easy. And yet, with very few exceptions, I never felt hard done by the luck of the draw. As a fan of Scrabble, Boggle, and other word games, this is a nice alternative for when I can’t get some friends around to play one of the board games.