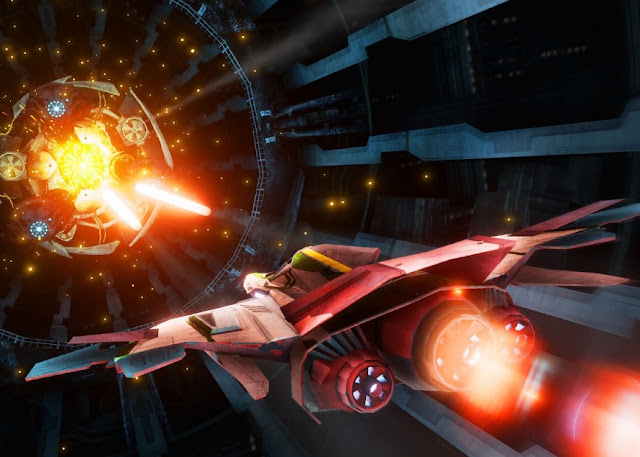 The Collider 2 is a tunnel racer that’s unlike most tunnel racers out there. With fantastic visuals and a sleek sci-fi setting that brings to mind the world of Mass Effect, The Collider 2 is as visually impressive as it is in its gameplay. Featuring high octane action that borders on heart-attack, there’s nary a moment in the game that’s less than frenetic.

Related reading: Another really good example of this genre in action is the AiRace games on the Nintendo 3DS. Harvard’s review of AiRace Speed.

Developed and published by Shortbreak Studios, this game is a sequel to the hugely popular The Collider that was released back in 2014. Eschewing the abstract, cyberpunk style of the first game for a more sci-fi feel, The Collider 2 also changes the perspective from first-person to third-person. Since I haven’t played the first game I cannot comment on whether this move should be applauded or not, but judging from gameplay videos on YouTube, as someone who suffers from mild motion sickness I’m glad I got to play the one installment in the series that’s in third-person. Those who prefered the first-person perspective of the first game need not despair, however, as the game allows the option to play in Steam VR mode. Since I also lack in the proper VR equipment, I cannot tell how the game works in that mode – but I can imagine it would be fast and, for people who do get motion sickness, mildly gut-ruining.

Basically every Star Wars’ fan’s fantasy come true, the gameplay requires that you complete suicide missions via entering a gigantic alien mothership, and from here you avoid complex geometric obstacles, blow stuff up, and collect power-ups and glowy ‘collectibles’ (I honestly don’t know what they’re called, and as far as I know the game never informs me). I’m pretty sure you must have caught wind of the fact that, yes, The Collider 2 is a twitch tunnel racer that will test your reflexes. The action can only be described as a blurry zoom of explosions and debris. Honestly, I’ve played “fast” games before, but this one just caught me off guard; I spent the first 15 minutes of my time with the game just exploding left and right. Don’t let this fool you, though, The Collider 2 is not unfairly hard. Rather, it’s just challenging with an appropriate learning curve have. Keep playing for awhile and before you know it, you will have tamed the basics of the game. 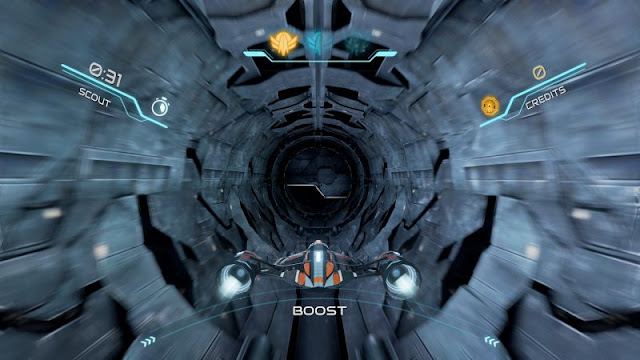 The campaign is perhaps the weakest aspect of the game. Comprising of brief suicidal missions that require you to infiltrate an alien ship, avoid obstacles and come out the other side safe and sound, the missions are just couple of minutes long (seconds in the earlier ones). At completion of one set you face with a boss. The strategy remains the same: avoid everything that has the potential of harming you and you will be fine (relatively speaking, naturally). Speaking of damage, you get a shield that temporarily goes down when you collide with anything, at which point your already finicky spaceship is rendered even more vulnerable and naked. Though the shield goes back online within five seconds, this brief lapse of security in a breakneck game such as this where apertures are small and precise, it will have serious repercussions on your heartbeat; but mine always went into a Buddy Rich percussion marathon every time the shield went down.

The real meat of the game is in the Endless Run mode. This here is the reason that will keep you invested in the game for hours and hours for end. As the name suggests, this mode is all about getting high scores while flying through an infinite tunnel of increasingly complex obstacles and ludicrous speed that only gets gradually shaky and violent. Endless Run follows the same design of that of campaign missions except for one thing: instead of randomising the level structure whenever you mess up, it follows a strict and defined pattern. This I think is a great move on the developer’s part, as it gives non-professional players some breathing room and a sense of accomplishment when they finally overcome the set of obstacles that has been hindering their progress. Couple this with the dynamic leaderboard and the seriously addictive nature of the whole thing, and in Endless Mode you’ve got something that will last you for plenty of time.

It’s easy to recommend The Collider 2 as something that is a lot of fun to play. Whether or not you enjoy tunnel racers, and even if you hadn’t heard of the unofficial name for this “genre” until now, it doesn’t matter: the game strikes a near-perfect balance between challenge and familiarity that players of all skill levels can learn to appreciated.

Who needs to simply build a city when you can also rule it?!