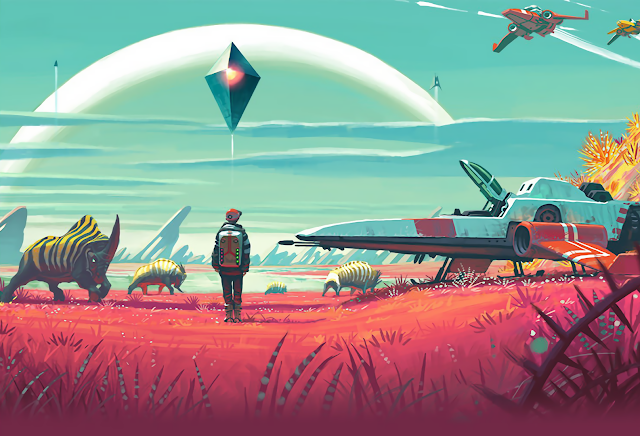 Sheffield band, 65daysofstatic, is responsible for the music within Hello Games’ upcoming No Man’s Sky, but listening to their 2004 debut, The Fall of Math, an exploratory space opera is the furthest thing from my mind. There’s a strange blend of raw, industrial noise and beautiful melody, underpinned by thumping baselines and aggressive drumwork that all comes together to create a remarkable sound. Were I to associate it with any game, it wouldn’t be something like No Man’s Sky; the album calls to mind bullet hell shoot ‘em ups like Ikaruga and Touhou Project. Some tracks would make a fitting score to the mass killings of a game like Doom, and others take a more layered and introspective direction that makes me think of Life is Strange.

“We’ve spent the majority of the last fourteen years disguising an inherent love of relentless, dirty noise with an over-reaching desire to be half-competent at minimalist, harmonic pseudo-classicist instrumentalism,” the band’s Joe Shrewsbury told us. “The result seems to be a fairly cogent and coherent blend of sonic forcefulness and textural imagination coupled with an ear for a tune.”

Fast forward to their most recent album, 2013’s Wild Light, and the No Man’s Sky connection becomes clearer. That same raw energy from The Fall of Math is there, but the music is grander and more experimental – fitting for a game that’s focused on space travel and discovery. “In all honesty, I think we sometimes walk a razor’s edge of trying to make compelling, visceral untamed noise, the inverse of which is a collapse into bombast and space-opera,” Shrewsbury said. This ‘collapse into bombast and space-opera’ is something they try to avoid, but it’s certainly apparent in Wild Light and, as Joe said, it lends itself perfectly to a game like No Man’s Sky. “As well as being subtle, nuanced, evocative, widescreen, the game does have that tiny hint of the lurid, uncanny-valley retro-future. If that makes sense?”

Hello Games and 65daysofstatic first got together because the developers wanted to license the track Debutante for a trailer that would publicly reveal No Man’s Sky. “Back then, the project was just on the cusp of being called No Man’s Sky, having previously been called ‘Project Skyscraper’, which at the time seemed enigmatic but later became amusingly ironic as we wrestled with the rough hewn sun-baked crude mud blocks of raw audio we were trying to construct into a glossy, highly polished black monolith of sound,” Shrewsbury said.

“We agreed to license the track, but were intrigued by the project in general, and so we asked to hear more about it. I guess our enthusiasm was noted, and there was a mutual enthusiasm for our music from the Hello Games camp. We had really wanted to get involved in a soundtrack project for some time and this just seemed too perfect. The sci-fi element, the cinematic quality of the gameplay we had seen, and the scope of the game itself all seemed well suited to what we we did, or what we thought we could achieve. The more cutting edge elements of the project, working with procedural music for instance, were appealing. We’re not a band who’s worried about smashing our music into millions of pieces and putting it back together in a different shape.”

Of course, with every other aspect of No Man’s Sky relying so heavily on procedural generation, to the point of creating an in-game universe that is functionally infinite, it makes sense that the music, too, would be randomised. However, music is typically seen as a linear art form, so I would have assumed that the idea of non-linear music must have been difficult to wrap the mind around. Shrewsbury, however, said the team was unfazed by this challenge. 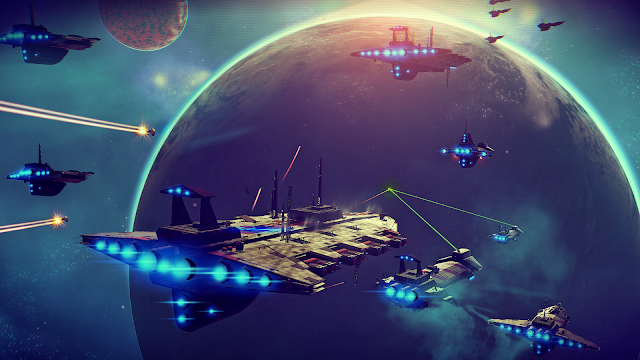 “In some ways, a lot of the in-game audio design felt very freeing. Some of what we do anyway crosses into what might more accurately be termed sound design rather than pure composition, but No Man’s Sky provided a lot more scope for this. Being in the studio with loads of amps and instruments and trying to make the strangest sounds possible is a luxury for a band like us, so we had great fun doing it. The pressure comes with making sure all these pieces of audio not only relate, but combine to create something with an emotional agency to them. We really wanted to transcend standard background ambience, so that’s where all the difficulty was.

“But we were working with the excellent Paul Weir, the audio director on No Man’s Sky, and the software he designed was relatively user friendly. On top of this, at least half of 65 are pretty good with computer stuff. We used some common software, a program called FMOD and also Max to sort of ‘fake’ randomness while we were compiling audio, to check.

“Whether or not we’ve succeeded is another matter. We’re immensely proud of the the material we’re releasing in album form, and the in game music is certainly shaping up to be very interesting, and hopefully a progression from what’s been done before. Ultimately, producing something cutting edge and new is all well and good but we also wanted to produce something good. Hopefully we’ve achieved that.” 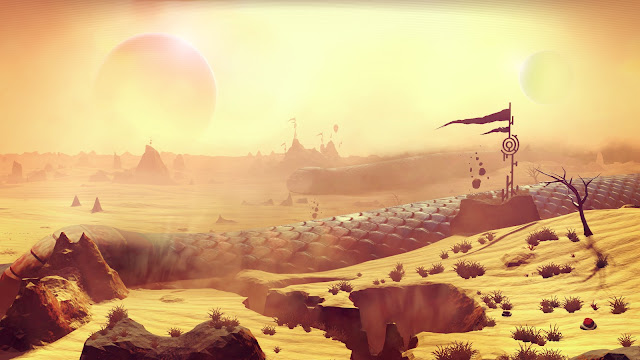 For its theoretical challenges, there have been experiments done with procedural sound design in games. In fact, it’s the core hook of Proteus, an exploration game in which your interactions with the environment cause the music to bend and mutate in quite fascinating ways. Proteus was a polarising game, to say the least, but regardless of what you think of the game as a whole, it’s hard to deny the success of its approach to music. This makes it an important point of reference for a game like No Man’s Sky, which has a lot of similarities, albeit in a very different context.

“We had a look at Proteus, yes. It’s interesting and it’d be great to chat with whoever made it. It certainly reveals the balancing act between the narrative form that linear composition provides that is negated by the need for generative instances of music that the players action demands,” Shrewsbury said. “The people at Proteus seem to have found that, although it seemed like their goal was to write suitable atmospheric music, whereas ours was to ensure catch sci-fi sympathetic themes from the record were successfully incorporated into the gameplay.”

While the music in the game itself will largely be randomised, those wanting a more linear aural experience can look forward to No Man’s Sky: Music for an Infinite Universe, a soundtrack that will be released alongside the game in June. According to Shrewsbury, creating the soundtrack “meant striving to fit the ideas we had into more standard compositional forms, to make them flow as an album and so on. Obviously we did all this with No Man’s Sky in mind, we wanted to make something that would complement the game.” 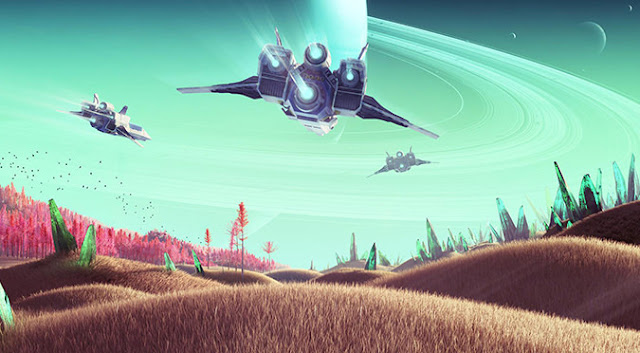 This might seem like the complete opposite of what No Man’s Sky is going for – a linear, crafted soundtrack to a game that has procedural generation at its core – but the album served as the basis for the game’s music. It’s this that was ‘smashed into millions of pieces’ that could be used for the music generation systems in No Man’s Sky.

65daysofstatic’s immediate plans for once the project wrap  are the normal post – album release plans, or at least, as ‘normal’ as a band like this gets: releasing the music, getting a chance to play it live, and hopefully getting to relax a little bit. But what happens after that? Would they do another soundtrack project?

“We are always open to new projects. I think it would be difficult to go looking for a game project where the composer’s involvement was so integral to the finished project even after the music had been recorded,” was Shrewsbury’s response. “But we’re open to ideas. It’s consistently rewarding to us that 65 still exists, some weird noisy uncool band that started over a decade ago, and I think part of the reason we’ve survived so long is being enthusiastic and open to ideas that might be slightly unconventional. 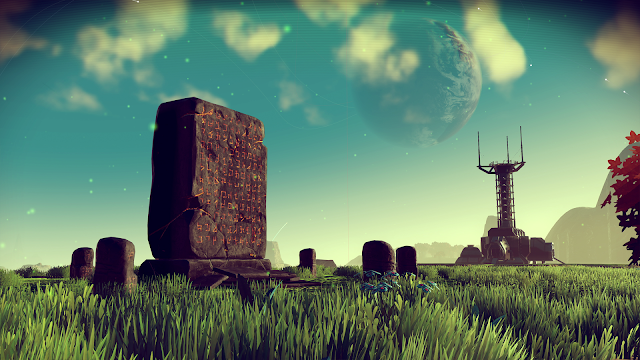 “No Man’s Sky has unique and exciting elements from a compositional point of view. So that made it an interesting challenge behind simply writing a record. In general terms, I don’t know what it’s like being in other bands, but we certainly feel like an endless cycle of touring, recording an album, touring that album is too inward looking to maintain creativity beyond a couple of records. There’s all this other stuff happening in the world, all these other art forms being made. It seems wrong not to try and get involved.”

For now, the plan is: release the music, play the music, and maybe, just maybe, take some to play a few games – No Man’s Sky, perhaps?

“We’re too busy writing music and keeping 65 afloat to play games,” Shrewsbury laughed. “I played that game Limbo last year. It was great. And really looking forward to taking a week off to play No Man’s Sky, provided we can get Sony to give us a Playstation. Each.”