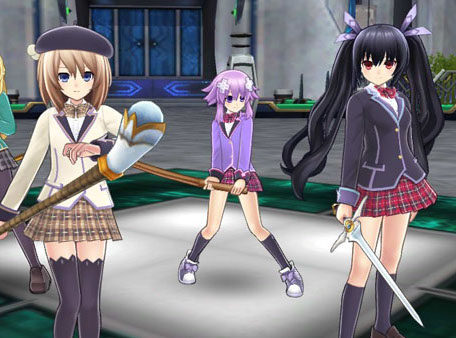 Idea Factory is really running with its Hyperdimension Neptunia franchise. After a rough start, the main series hit on to a formula that made for some really quite entertaining games, and from there, Neptune and her buddies have become prolific stars that the company rolls out on a frequent basis to tap into the growing fanbase. It’s the Final Fantasy for the otaku.

In addition to the main games, Idea Factory is now working with third parties to churn out a mix of offshoot titles, from the idol management game, Producing Perfection, to Noir’s tactics RPG (Hyperdevotion Noire), and perhaps most enjoyably of all, Idea Factory partnered with exploitation specialist, Tamsoft, and produced the fanservicey fun brawler, Action Unleashed. Idea Factory was apparently pleased with that game, as Tamsoft has been given the rights to make MegaTagmension Blanc, which is, as the name suggests, the first game in the franchise that has made Blanc the hero.

Blanc is the most underused character in the entire franchise, and her headlining a game immediately caught my attention. Most people would be aware by now that in the Hyperdimension series the characters are personifications of game companies or consoles. Well, Blanc is the “Nintendo” character, and is a generally studious and intelligent individual that has a sharp temper and a big hammer to back that up. The rest of the team join in, of course, but Blanc is definitely the star of this game, and Tamsoft’s work with her has produced another fun, fanservicey brawler. One that makes better use of the self referential satire that the series is best known for than what we saw in its predecessor, Action Unleashed. 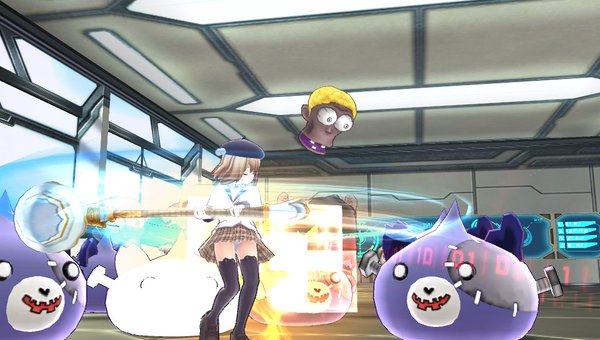 The game whacks you in the face with its fanservice right from the outset, as we are introduced to all of the girls from the Hyperdimension Neptunia series dressed up in highly fetishized school uniforms, complete with skirts that are short enough that it would be impossible to move around in them without flashing what’s underneath to the world. Which of course is exactly what happens; the moment any of these girls start moving around you’ll get a good eyesight of panties, and the special attacks involve jumps and spins that may as well remove the skirt entirely.

There’s some quick excuse for the girls dressed this way thrown in to the introduction of the narrative; that they’re going undercover in order to understand the people better, or some such thing, but in practice Tamsoft simply wanted to stick school uniforms on the girls and get with the upskirting. Which is fine; by now you’ll already know if you’re comfortable with the Hyperdimension franchise or not, and in terms of extreme fanservice there is certainly “worse” than what we see in this game. MegaTagmension is, as is standard for the franchise, aiming for silly and satirical rather than genuine titillation, and so the fanservice is actually quite charming and amusing as a result. While you really should play the “main” games in the Hyperdimension series before these offshoots, once you have a familiarity with them, these games all help to build characters that have far more personality than most give them credit for. Irreverent the girls of Hyperdimension might be, but they are always great fun.

That being said, the narrative itself is quite clever in the way it leverages satire to pass commentary on various (serious) social topics. For one such example (and the game is filled with them): thanks to a declining population across the nation, the school that the girls are attending to do their research (and have become attached to as a result) is in danger of being closed down. This is a real concern that the people of the real Japan are grappling with, so there’s cultural context to the humour here. The girls then orchestrate a solution to shoot an awesome movie, which will encourage enrolments and save the school. This is, of course, a plot similar to what we see in the popular Love Live anime, which the game is broadly, albeit subtly, satirical of. So they decide to make a zombie movie, Blanc appoints herself the screenwriter, director and lead actor, and naturally the concept for the film is insane. And then real zombies show up, and the team decide to use these as props for their film as they go about beating them up. 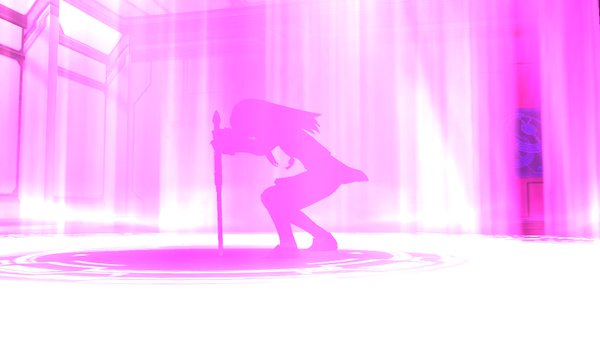 There aren’t many lines of dialogue in MegaTagmension that aren’t parodying something or being self referential to an almost bewildering degree. As with all Hyperdimension Neptunia games, there’s some humour thrown in around the politics and behaviour of the real games industry, but being about the shooting of a film, there’s also a more broad humour that looks at the creative process itself. Watching Blanc order people around without much regard for continuity is amusing, if only because the visual image of the completed film is something of a travesty beyond what even Uwe Boll is capable of. The great joke here is that everyone reckons they’re creative and skilled enough to make a film… and of course they’re not. Yep, this game takes a good ol’ swing at the Dunning-Krueger case studies out there.

Related reading: The developers of this game have an equally fanservice-heavy title on the PlayStation 4 in Onechanbara Z2: Chaos. Matt’s full review.

In each battle (or “scene”) you can take two characters, and picking the right two characters for a level (which unfortunately does take some guesswork or replays) will yield additional conversations between the two characters, and these are great fun in their own right. For all the humour that Idea Factory pulls, it has got a good, charismatic, ensemble cast, and each with their own distinct personalities. Tamsoft has done that heritage justice, and even thrown itself in there as a new character, Tamsoft, who is a busty lass not unlike what you’d expect to see from most of Tamsoft’s other games.

Each character has their own fighting style and series of special attacks to learn and master. The ‘feel’ of each of these characters is significant. Blanc herself is slow and cumbersome, but that big hammer of hers packs a wallop and she has good area of attack abilities. Nepgear is fast and fluid with her sword, Uni is nasty at range with her gun, but vulnerable when that gun needs reloading, and the twins, Rom and Ram, focus on magical abilities. Newcomer, Tamsoft, offers a complex range of combos to string together, and is certainly the most complex of the characters to master. This is a thinly-veiled bit of ironic humour directed at the critics who often deride Tamsoft’s games as being button mashers. You’ll no doubt develop favourite characters, but Tamsoft wants you to experience all the bonus dialogue scenes, and so you’re also encouraged to grind up experience levels at times by replaying older levels with characters who aren’t up to snuff with your typical favourites. 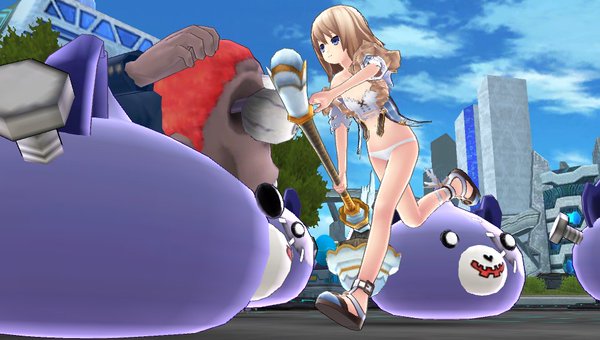 This helps pad out a game that is not overly long in length, though a big part of why it is over relatively soon is that levels tend to be done in the blink of an eye. Aside from when a boss shows up (and more on that in a second), you can breeze though a level in minutes, if not seconds, as long as your character is up to scratch. This makes MegaTagmension a good fit for those who still use their Vita for portable gaming, though it can mean that the experience feels a bit shallow, especially when the AI reveals itself to be spectacularly weak, and enemies for the most part simply line up to be caught in big area of attack abilities.

One neat feature that Tamsoft has implemented into the game that I wish all games would do is a free camera pause mode. Whenever you like you’re able to pause the game in action, and scroll or zoom the camera around however you’d like to take some killer screenshots. It’s a feature that Tamsoft included in Action Unlimited and Onechanbara Z2: Chaos on PlayStation 4, and it’s an appreciated feature when the reason you’re likely to be playing this in the first place is that you get a kick from exploitation games. It’s a bit irritating to actually pause at times (as it requires two distinct button presses and this can be hard to time with a special attack), but nonetheless I had a lot of fun grabbing screenshots as I played.

In that context it’s a bit disappointing that this didn’t appear on the PlayStation 4. The Vita, fine console as it is, is simply not up to the capabilities of the home consoles, and when we’re talking about a game that does make exploitation a core theme, you do, in fact, want to see characters as detailed as possible. Going from Dead or Alive Xtreme 3 to this is unfortunately a step back – it looks good in motion, but once paused the relatively low number of polygons in the characters hurts its cause. 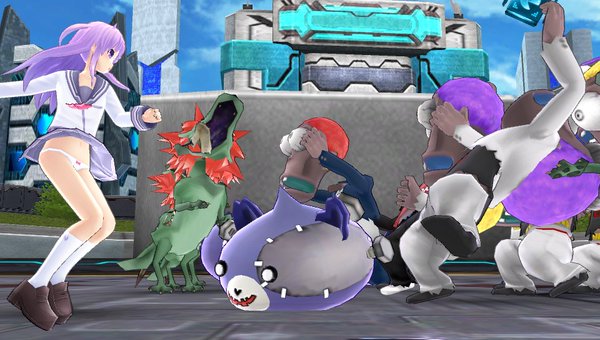 Where MegaTagmension is at its best in terms of its gameplay is during its boss battles, where it takes a leaf or two from the Monster Hunter or Souls series, but streamlines it to be fast and furious. The bosses tend to be large in size, and victory against them relies on learning their attack patterns, and then figuring out how to maximise the impact you have on them without taking too much damage in return. These battles know how to be challenging, albeit cheap at points, and they make for good dramatic highlights through the game.

Related reading: Tamsoft’s most highly regarded work might be what it’s done with Senran Kagura. Matt’s review of the PS4 Senran title.

There’s also online multiplayer for up to four people to take on additional challenges together. This mode is a good way to grind up experience and have some fun with friends, but given its niche nature I wouldn’t expect to find too many people at random to team up with.

Tamsoft went into this one with a clear brief to do something heavily fanservicey, and even by comparison to its work on Action Unleashed, MegaTagmension certainly achieves that. It’s heavily exploitative with those school uniforms, and that might put you off it, but for existing fans of the girls and their antics, this is another very worthy and thematically spot-on feather in the cap. It also represents one of the stronger efforts at storytelling in the series, aside from Idea Factory’s own work, and that’s a good sign for the future development of the series.

On making the music behind No Man’s Sky