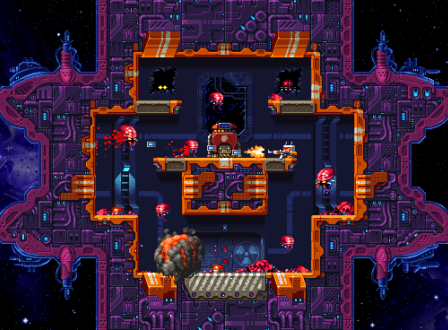 In Early Access now, but due for full release in summer (winter for those cool cats south of the equator), Super Mutant Alien Assault is shaping up to be something really special for fans of fast paced, twitch-based, arcade action.

Taking inspiration from the likes of Super Crate Box, you’ll be fighting across randomly generated single screen arenas, either by yourself or in co-op, using everything you have at your disposal to wipe the floor with the wide range of enemies.

Taking inspiration from arcade classics and the seminal Super Crate Box by Vlambeer, Super Mutant Alien Assault is an unforgiving dance with death across randomised single-screen levels. The pace is rapid and dodging is as just important as shooting if you hope to survive. Played solo the game is frantic, but with local co-op, a second robot enters the fray and takes the action to a whole other level.

Featuring a near bottomless pit of unlockable weapons, explosives, sidearms, special abilities, perks and defence moves, each single-screen level is a randomised combination of layout, vending machines, enemies and objectives. You’ll never know which weapons or grenades will spawn in the vending machines or which special abilities, sidearms, perks and defense moves will be served up. The more you unlock, the more mind-boggling the possible combinations.

There’s also a trailer that shows off how frantic the action will be:

Hands on with the new, gorgeous, Nexon MMO, Riders of Icarus