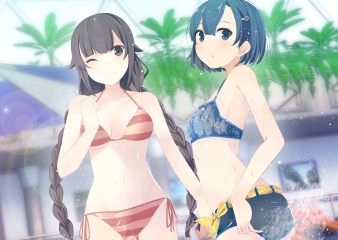 Well, I can’t say I didn’t know what I was getting into. The reality is that I knew exactly what I was getting into when I saw that Parascientific Escape Cruise in the Distant Seas was being published by Circle, the same publisher that brought us such classics as 18th Gate and Sweet Memories: Blackjack. So, in a sense, Parascientific Escape wasn’t a disappointment at all.

Related reading: Matt’s review of Danganronpa, the game Parascientific Escape so desperately wants to be.

It wasn’t disappointing, in that it was every bit as terrible as I was expecting. This is the worst visual novel I have ever experienced. It’s tempting to say it’s unplayable, in that I can’t have it on for five minutes before wanting to give up on games forever, but that would be inaccurate, since a visual novel just involves scrolling through text and performing basic inputs on to the screen. So instead I’ll just a far more accurate pejorative for this kind of game – Parascientific Escape is illiterate.

Ouch, right? Well, that’s nothing compared to the headache this thing gave me. But let’s try and provide the critique in that classic, old-fashioned compliment sandwich psychological strategy that people use when they want to seem like they’re the good guys in saying some pretty robust critiques: 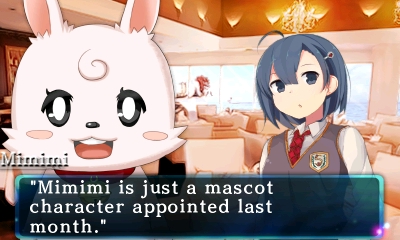 Compliment: Parascientific Escape kinda looks and sounds like it wants to be Virtue’s Last Reward and Danganronpa, and those games are awesome. You’ve got puzzle rooms you need to solve in order to save a girl from having a bomb collar around her neck go boom. And the soundtrack sounds like someone took the cutting room clippings from Danganronpa and ran with it. It’s a pretty clever trick there, being so slavishly loyal to the brilliance of Masafuni Takada’s work that I wanted to love this game against all my expectations of it.

Criticism: Holy bejonkers is this thing written badly. I mean, I’ve read 50 Shades of Grey (I totally didn’t mentally swap Hatsune Miku and myself in as the characters as I was reading, I swear!) and for all the criticism that book gets, at least it’s written with a basic understanding of how writing is done. A very basic understanding, but at least the book went through an editing process that left it in a readable state.

In Parascientific Escape, though, you could go to fanfic.net, grab any random piece, and plonk it in this game. It might be filled with hardcore descriptions of Peach and Zelda getting it on (no, really. That’s 99% of fanfiction), but it’ll still be better than what this game comes out with. 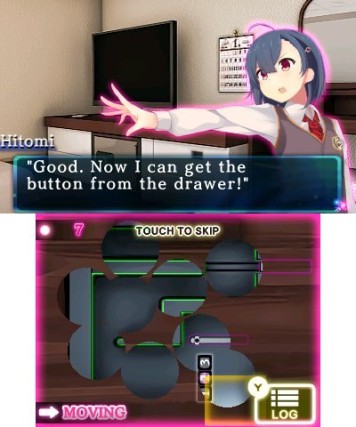 Every line of dialogue is either so overblown that it sounds nothing like how people would actually talk, or is as soullessly functional that it fails to convey any emotion, visual imagery, characterisation, or motivation whatsoever. There are four main protagonists in Parascientific Escape, but I struggled to figure out who was talking at any given moment, as they all had the exact same personality; a consistently flat one. Surely it’s a sign of a truly woeful visual novel when, after completing the game, you cannot remember the name of one single character. By comparison; I haven’t played the original Danganronpa since it was released on the Vita two years years ago, and I remember with perfect clarity just who Kirigiri and Byakua are, why Aoi is a perfect waifu, and why I was pretty bummed that Leon was the first to fall foul of Monokuma’s game (spoiler, I guess).

In Parascientific Escape, nothing. I can barely remember a single plot device beyond that one girl’s collar, and as I write this I last played the game one hour ago. The core mystery is also generic to the extreme, and often nonsensical. A girl who has psychic abilities (because of reasons that are never explained) wakes up to find herself locked in a cabin of a sinking ship with the aforementioned collar girl – who turns out to be the daughter of a rich CEO. The rich girl has the collar because a mysterious villain – and I’m literally quoting word for word here – is “angry” and “wants revenge.” So instead of, you know, just killing the girl, or even trying to come up with a better justification than he had a bad hair day, he sets her the task of finding cards in the ship before it sinks and/or the girls collar blows. And this other girl decides to help collar girl because she’s always had a fear of helping people after her dad died helping someone and now she feels good helping people.

… I assume you feel the need to drink after that description, because I sure as hell needed a couple (dozen) beers to actually continue playing after that. I’ll save your liver the trouble and finish the summary there, but suffice to say it doesn’t get any better, and the mystery-style twists and turns that the game throws in are about as predictable as what you’d expect a ten year old writing her first mystery novel to come up with. The saving grace to it all is that it’s short. 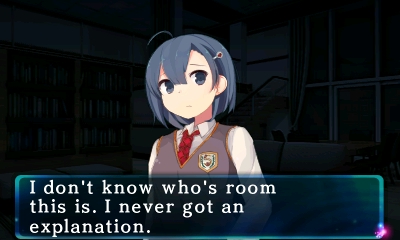 I’m sure the developers were quite earnest in their desire to do something like Virtue’s Last Reward. But whoever wrote this game for them fundamentally failed to understand what makes visual novels like Virtue’s Last Reward and Danganronpa so great; it’s the cast of characters, the interesting, nuanced villains, and the moral conflicts that these games put people in. And the twists. If you can predict what is going to happen to characters well in advance of it happening, this kind of narrative is always going to fail. Strip all that out and what you’re left with is an amateurish mystery about a somewhat dangerous situation… and that’s exactly what we got with Parascientific Escape.

Because the lead character has psychic powers, there’s some puzzles thrown in, arbitrarially, because it would have been far too much to expect that the puzzles should make sense in context of what’s going on. Every so often you’ll need to use your character’s psychic powers to “see into” a locked drawer or similar, and then manipulate objects (sliding puzzle-style) around to clear a path so you can retrieve a key or similar. These are not difficult puzzles. In fact it’s an insult to anyone’s intelligence to even call them a “puzzle.”

There are also point-and-click adventure style environmental puzzles to figure out that play out like a poor Broken Sword or whatever. For example: to open a security-locked door, you’ll need to find a screwdriver to unscrew a ladder, and use that to access a air duct, drop into a room with an otherwise locked door, collect a memory card reader so you can then use a computer to re-write a security card’s permissions, and then use that card to go through a security gate. The solution is always obvious, and never elaborate enough to be truly entertaining. In other words it’s pointless busywork. 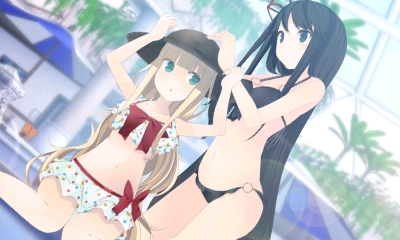 But as I promised, this would be a compliment sandwich, and that means I need to end on a high note. With that in mind, compliment: the game’s anime girls are somewhat cute and it’s possible to unlock bonus art of them in swimwear. Which I’ve provided in this review above so you don’t actually need to play the game for that particular reward. How nice am I?