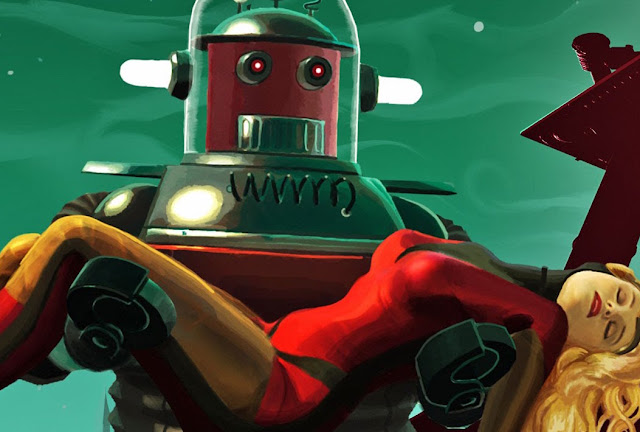 I have a confession: I genuinely like cheesy science fiction, monster films, and horror from the heyday of B-grade nonsense. Even stuff like Plan 9 From Outer Space gives me kicks because yes, it’s nonsense, but at the same time these films have a distinct aesthetic and energy entirely of their own, which we just don’t see any more.

And I love The Deadly Tower of Monsters so very, very, very much because it comes from that exact aesthetic and frame of mind. ACE Team, the maverick Chilean developer behind other oddball titles such as Abyss Odyssey and Rock of Ages, clearly has the same love and respect for the B-grade charm as I do. It’s not long, intricate, or in-depth, but it doesn’t even try to be. Instead, what it guns for is pure hilarity. And it utterly, unequivocally, succeeds at that. While I won’t be awarding it any game of the year awards, I’m going to really struggle to think of a game that I simply love playing as much as this one this year, I suspect.

Video for my review. Loooooooove this game. #PS4share https://t.co/OK0CUCtwnu pic.twitter.com/Y2n3OKvusj

Imagine if you will the worst straight-to-video film you’ve ever seen. If you grew up in an era that only really started with DVDs, you’re probably not going to know what I’m talking about there, but back in the day films that weren’t good enough for cinema release were tossed on VHS tapes and shipped to video stores to be rented over and over again by the inevitable one or two souls that would see them as a cult classic. By the time you got to watching them, when they were $1 for a weekly rental, you had to struggle through the thick grain that the degrading tape threw up on the screen to accompany they cheap “special effects” and ham-fisted dialogue delivered by the cheapest actors the director could find; typically the coffee guy that once got to sit on the set of a real Hollywood movie.

Those were the days. And these films really were something special because, terrible as they were, they were almost universally keenly aware of how terrible they were. And they were made, typically, not to make great works of art, but simply for the joy of making films for the specific audience that would enjoy them. These days there’s such a glut of quality out there, and cameras and editing equipment are so cheap that anyone can afford to hire quality drama students and use digital cameras to retake scenes over and over and over again until they make one they’re happy with. So the push is towards making better quality films, even on the most extreme budgets. Even the cheapest of films now also don’t have to face quality degradation from the VHS format, as they are permanently locked into high quality digital formats. Everything’s so nice and sterile in the struggling artist end of the filmmaking world that it’s just not any fun any more… 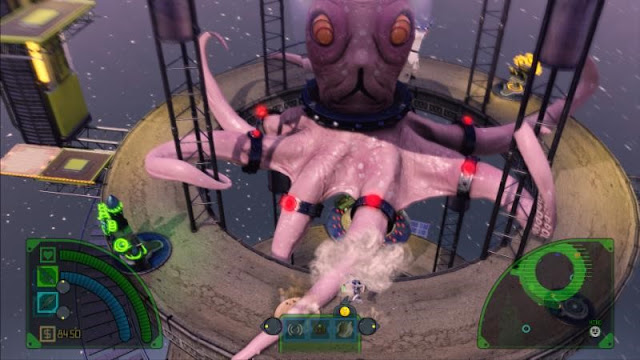 But I digress. The point is that if you grew up with awful straight-to-video sci-fi movies then you’re instantly going to be in love with the aesthetic of The Deadly Tower of Monsters. ACE Team has absolutely nailed the cheap cardboard environments, plastic trees and VHS grain filter (which you can turn off if it’s irritating you but why would you do that, you pleb?). As neat as all of that was, all the effort paled to the first time that I bumped into some dinosaur enemies and they were animated like the stop motion used for monsters of yore. By that I mean they jerked around at about five frames per second. I thought for a second that my PlayStation 4 was freaking out about how much fun this all was as I was, and it was simply failing to render the enemies properly, but then the “gorilla enemies” (men in gorilla suits) were perfectly smooth. So, nope, the PS4 was up to the task, it was just that the stuttering dinos were deliberate. It can’t have been easy to show as much attention to detail in making a game look like one giant mistake as this, and where I think the effort will fly over the heads of most, for its target audience (retro nerds like me), it’s just far too kitsch to be anything but immensely appealing.

And I haven’t even got to the best bit yet. Oh no. The best bit is the ‘director’s commentary’ that narrates the ‘behind the scenes’ of the game as you play. It’s not a real director’s commentary of course, but rather a guy with a dodgy 50’s-era over-the-top Hollywood accent talking about how awesome his ‘movie’ is and how they put it all together. I went in fully assuming that I would hate this feature, because it could have been such an awful and desperate grab for humour, but about an hour in I was in tears. I mean, the first boss battle is completely railroaded by the guy going on a rant about how unappreciated his genius is because he had a woman rescue the man from a dangerous situation and… well I actually lost concentration on the boss because I was too busy laughing my backside off about this director guy’s ‘commentary’. It’s rare for a game to make me laugh my way to failure, I can assure you.

The game itself is, well, perfectly generic. It’s a top down RPG-lite/ top-down shooter thing; think Diablo without the deep level of character customisation. There’s some light levelling up to do, but wasting time on that is really missing the point of Deadly Tower of Monsters. This is a game to simply plough through, mashing buttons away and giggling in anticipation for what nonsense is going to come up next. ACE Team managed to get the mechanical fundamentals tight and engaging, and there’s the odd moment where environmental hazards or challenges force you to think on your toes, and in doing so they managed to achieve a standard of playability that not many game developers have managed to when setting out to be funny. But ACE Team also knew where the real strength of this game lies, and whenever you start to think the narrative pacing of Deadly Tower of Monsters is waning, some new, fresh insanity is thrown at you to keep you keen. 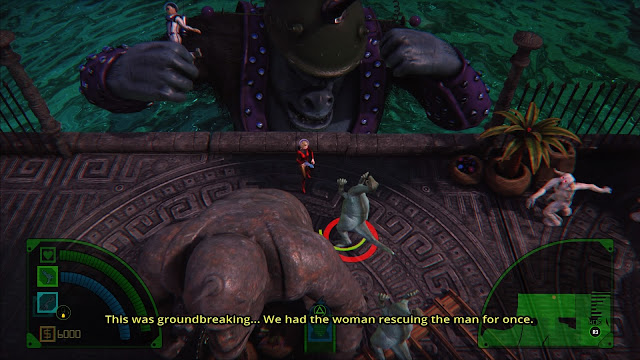 It’s not a very long game at all; I’d clocked it in about seven hours, but those are the best, most entertaining seven hours I’ve had with the PlayStation 4 controller in my hands for a very long time. I wish there were more games like it. Where other people turn to the likes of Call of Duty for their passive entertainment, for me, something like this is infinitely preferable; it taps into my youth in a powerful way, and still manages to be genuinely creative and original, in an industry too burdened with clones.

I have a lot of time for Deadly Tower of Monsters. More than Diablo, more than Fat Princess Adventures; this is the grindy, top-down action ‘crawler that I am going to come back to over, and over again.