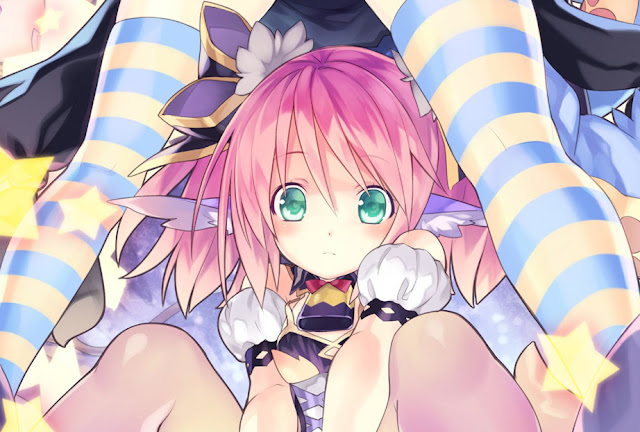 The Vita has played home to some dungeon crawlers that… well, they rather like turning on the fan service. Demon Gaze was the first, and it was a very fine game indeed, with some breathtaking art. Dungeon Travelers 2 came next and it was pure pinup gold.

But before we get to all that, let’s start by talking about our hero, Io. Io could refer to two things (but totally doesn’t refer to one of them); Io was one of Zeus’ lovers in the ancient Greek mythology (and that has nothing to do with this Io), but Io is also the “God of the Gods” in the Dungeons & Dragons philosophy. I don’t know if it was deliberate or not, but the latter does fit with this guy, as he is a figurative center of this game’s narrative, with complete power over all those around him. Io also has a slight problem; whenever he sees beautiful women he wants to burst all over them. And I’m using the literal term that Moe Chronicle uses there; this guy is hentai of the highest order and there is all kinds of innuendo involved whenever he has something to say. Io’s problem is that the world’s monster-people, who were once friends to humanity, now attack them indiscriminately, and he has been forced to descend into dungeons to both figure out what’s going on and save them. And to achieve this he needs to work with – you guessed it – a full harem of beautiful monster girls. 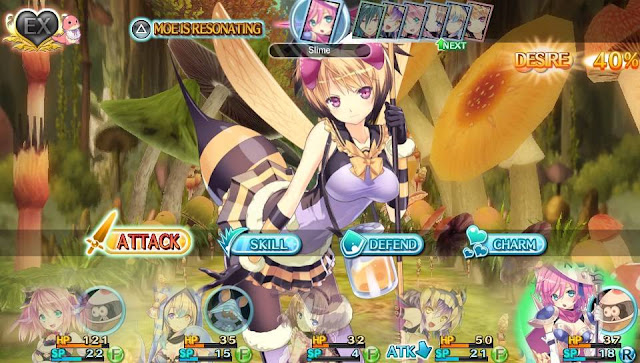 Anyhow, if Io builds up too much tension he explodes and none of the girls gets his benefit (look, I’m seriously not making this stuff up, okay?). And this is not good when it happens, because for the boss battles especially, the girls do need his help. Bosses tend to be tough, so it’s important for you to pick just the right moment to release over a monster girl in order to turn the tide of battle (look if you don’t believe me play the game for yourself. I’m being quite straight faced here).

As the party explores the dungeons, they will periodically run into monster girls that will attack them, and these can be tamed. Monster girls can be tamed by attacking their clothing, in order to tear it off them, revealing underwear that would make Miranda Kerr blush. Once the monster girl is down to nothing but her lingerie it’s time for the touching and rubbing minigame. To play this you turn your Vita on its side, where you’ll have a view of a portrait image of the girl. You need to explore the girl, poking and rubbing her in places until you find the handful of places where she does like to be poked or rubbed. Each girl is different here. Some girls like to be poked in places that… well, I mean if Anita Saarkesian’s still playing at this point she’d have some even stronger words to say there. 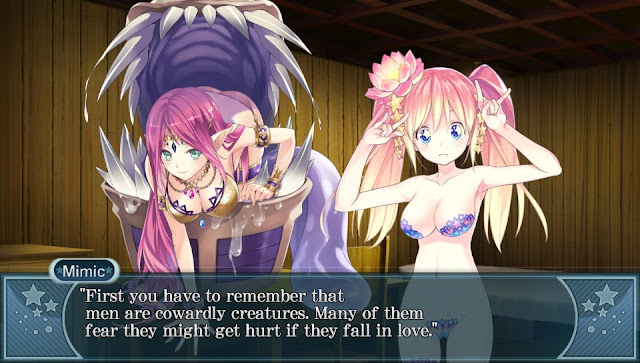 Once you’ve poked and rubbed the girl in the right places enough she’ll climax (I’m still not making any of this up), and that’s when you’ll need to rub both the top and bottom screens at the same time in a motion that, yes, looks like that action (Monster Monpiece fans know this mini-game well), and do it fast enough that she’s fully tamed and ready to join your party.

And unlike other monster collecting games, such as Pokemon, that’s the point where you’ll need a cigarette.

Each girl has her own special abilities and function in combat, and you’ll collect a bigger harem than you can take into a dungeon at any given time, so you’ll need to select the optimal party carefully. It’s a fairly straightforward development system for each girl, but this marries up nicely with the fairly straightforward approach to dungeon design. Moe Chronicle is most definitely not an intricate textbook in level design like the Etrian Odyssey games are, but it nevertheless gets the job done (oh God I’m throwing my own innuendo in now), and offers a stiff enough challenge (seriously, stop me) that fans of classic crawlers will appreciate. 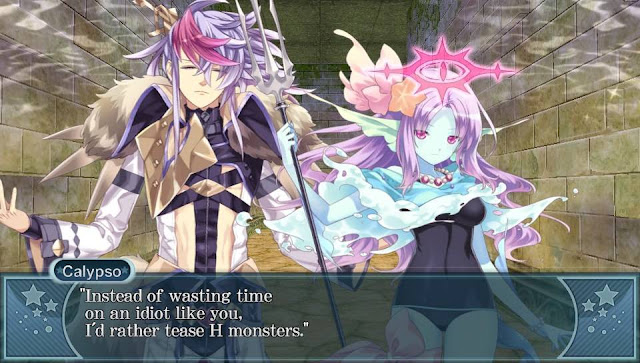 Production values are, as you can probably guess, a step or two below the dungeon crawlers that have loftier ambitions than a Guinness record for “the most extreme innuendo in a game ever”. While the monster girls are breathtaking examples of ecchi pinup (and I really do mean that. They’re unbelievably sexy), the common enemies are disappointingly uninspired, tiny, and barely animated sprites. Further, as amusing as environments like the forest of giant mushrooms (phallus!) is, it’s hardly the breathtakingly detailed art that we saw in Demon Gaze or Etrian Odyssey. That being said we are talking about a B-grade exploitation game here, and frankly the aesthetic works for the same reason that other B-grade exploitation games have aesthetics that work. Criminal Girls, Dungeon Travelers 2, and this game all share a consistency about their design in that they share an utter focus on the core subject (the girls), and everything else exists to support that art. In that context, this game achieves what it needs to.

Related reading: Over on the 3DS, for dungeon crawlers, you can’t look past Persona Q. Matt’s review here.

Really, though, Moe Chronicle is all about the ecchi-to-point-of-erotica. It’s the kind of game that would have been absolutely crucified by most western critics had the nice PR team at Idea Factory sent them copies. Whether that would have been a bad thing or not is debatable (by all accounts the controversy worked in massively boosting Dungeon Travelers 2 sales), but it’s really quite a pity that it would get crucified on those grounds. 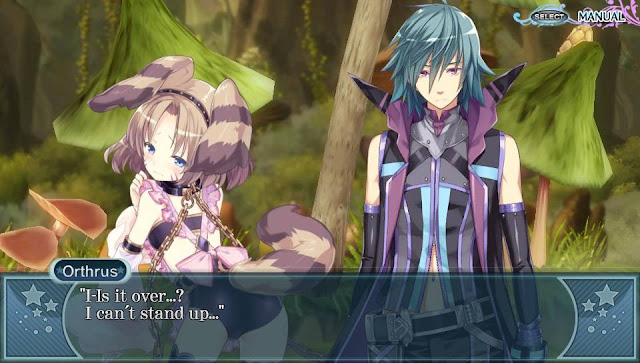 I say that for a simple reason; when the sexualisation is so utterly, ridiculously, over the top as it is in this game it is just pure fun. Sex is fun… and sex is funny. If we don’t have outlets to enjoy this kind of nonsense while recognising that it is indeed nonsense (and Moe Chronicle never pretends that it isn’t nonsense), then we’re missing out on something core to the human experience. When we stop having fun with sex we become deadly serious puritans and, well, you would think by now that people would figure out that a world that that just doesn’t work as a social philosophy.

There are, of course, any number of ways you could critique this game from a feminist point of view. It’s exploitative and it objectifies women. It puts women in a position where they are submissive to a dominant man. It quite literally affirms a patriarchal view on the world. These are legitimate criticisms of the game. Though you can argue that it is so incredibly ridiculous that there is a self reflective commentary buried within it, the storytelling and narrative design is nowhere near of a standard like Lollipop Chainsaw, Killer is Dead or even Dead or Alive.

But in recognising those issues are legitimate and worthy of critique, God I love Moe Chronicle. I love how utterly brazen it is, and how it wears its trash exploitation like a cape of pride. I love that it’s got some decent dungeon crawler mechanics sitting underneath it that make it worthy as a game even when you look past the ridiculous sexiness. 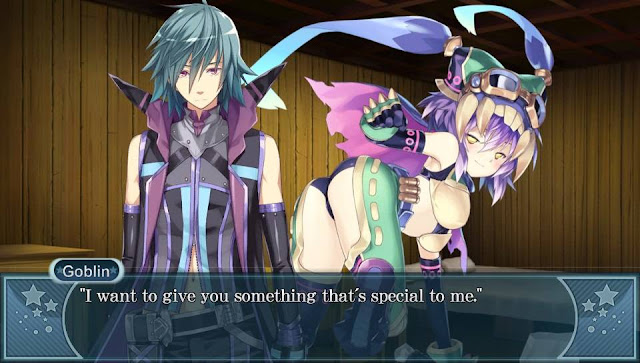 Related reading: Of course, for raw sex appeal, you can’t look past Dead or Alive 5. Matt’s review of the PlayStation 4 release.

And I love that that game gave me an excuse to write more innuendo in this review than I think I have done across all the other articles I’ve ever written at DDNet. Bravo Compile Heart. Bravo.

If this game is of interest to you, please support DDNet and order it through our affiliation with Play-Asia by clicking here.
Share this