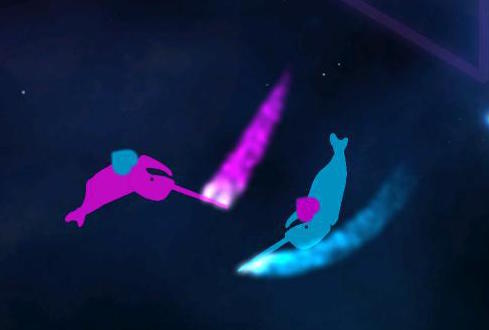 In an era where local multiplayer games are harder and harder to find, Starwhal is a great love letter to those of us who used to spend countless hours playing games such as Madden, Mario Kart, GoldenEye or Tekken with our buddies.

Unusual, though? Absolutely. You are after all, controlling narwhals. In space.

Related reading: Of course, for local multiplayer fun, it’s hard to look past the Wii U and Super Smash Bros.

Have you allowed that to sink in? Okay good, though admittedly even that brief description does very little justice to the brightly coloured, ridiculous antics that are in this game. Admittedly, Starwhal makes for a very weak single player experience. At its core, Starwhal is a fighting game. An odd, sometimes difficult to control fighting game. Instead of stringing together elegant combos finished off with a flashy jumping uppercut, Starwhal is more about flipping and flopping back and forth as you try to strike your opponents, while leveraging the arena landscapes to your advantage. Each player has a handful of hearts that successful attacks deplete from your opponent.

That is not to say timing is not important – in fact it is key, but quite often the awkward attacks felt more ‘lucky’ than ‘skillful’ when I pulled them off. The ridiculous nature of the attacks – often bouncing off of a wall and using that sudden change of direction to my advantage, led to numerous laughs. In spirit, it most reminds me of Towerfall or Paperbound, in that it is fast-paced competitive action in a stage, and as such, Starwhal works best with a crowd. If you live alone or lack nearby friends who can come on over and sit on the couch with you to play this, Starwhal is incredibly difficult to recommend. 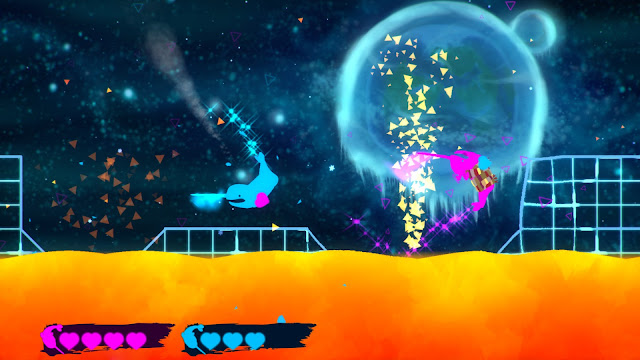 There are a few reasons for this. The most obvious is that there just is not a lot of content in the single player mode, and it can be worked through rather quickly. Worse, however is that the same kind of crazy, flopping controls that work so well when laughing with a friend or three in the same room merely feel frustrating when you are attempting to tackle the game solo. Instead of an endearing mechanic that brings about laughter, I have to admit that my reaction to the single player content was more akin to a sigh of resignation.

However, when you are in a multiplayer match with one of your best friends right there in the room with you, these same mechanics make for hilarity when precision skill is often replaced with a sort of clumsy luck that makes for an entertaining early impression. This was meant to be a party game as your awkwardly controlled narwhal flips and flops about, gliding oddly along the walls of the stage at a frantic pace that is tricky, certainly challenging and at times, but in the way that button mashing an unknown character in the older Tekken games was with my friends. Sure, there is something to be said for knowing a character and having some serious matches, but often times the best moments came from using a character none of us knew very well, and stumbling onto success.

Because the controls and gameplay are so odd, there was a risk that Starwhal would quickly devolve into a one-trick pony that wore out its welcome in the first half of an hour. Certainly there are limits to the shelf life of a game of this nature, but the longevity is helped by a nice variety in the 25 arenas and the character customisation. The visuals are a neon soaked blitz of colour, splashing about the screen in an oddly appealing way. There’s some character customisation too, though it is cosmetic. There is nothing to be gained by your creative use of colour pallet, at least in terms of gameplay. However, do not sell short the benefits of a good laugh over a ridiculously coloured narwhal as it thrashes about on the screen. 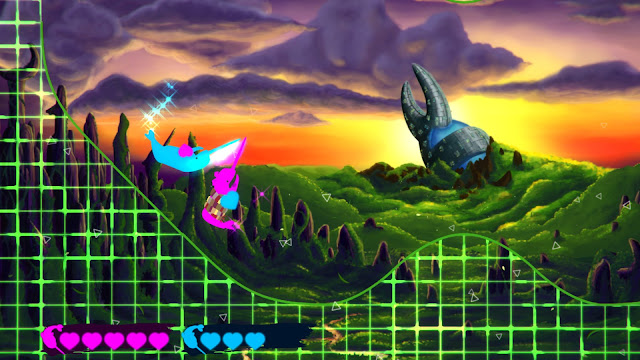 The biggest missed opportunity is the lack of online multiplayer. I can understand why the focus is on local multiplayer, because the conversation and laughs that erupt no doubt play better in person. That being said, it would have been nice to have the option to play with friends online, especially since some of my best friends from childhood live several hours away now. Limiting who can actually play the title with friends will undoubtedly have a negative impact on the longevity of Starwhal, which is a shame.

Related reading: The Apple TV, with games like SongPop Party, is quickly establishing itself as a real home for local multiplayer fun.

While trying to think of adjectives for Starwhal, I came up with a handful. Weird. Colourful. Quirky. Entertaining. Funny. These are some of the better ones I could offer. However, it is worth noting some of the others that sprang to mind as I continued to play. Shallow, Simple. Repetitive. Thankfully the former descriptions outweigh the latter, but it would be unfair to dismiss those latter items completely. If you have some friends or kids to play Starwhal with, pick up some controllers and lose yourself in its ridiculous antics.

Nope, the Oculus Rift’s price is not a sign that virtual reality is going to fail