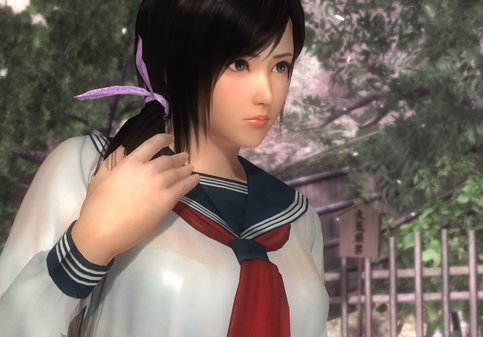 It was delayed a month, but nonetheless Dead or Alive Xtreme 3 will be released in just a few short weeks. I’m battening down the hatches against the media response to that one.

Actually, in all seriousness, I doubt it will be anywhere near as controversial as that. In a way I’m rather glad that it won’t be released in the west. It means that after picking up the English (Asia) release, I’ll be able to play, enjoy, and analyse the game through an import review without having to deal with nearly as much controversy it would have caused if Koei Tecmo went on a full localization and PR campaign with it. I suspect that relatively few gaming publications are going to go out of their way to import a game that they’ve already expressed displeasure with just to write about this one again, so the splash that it will make in the western press on release will be relatively muted.

However, the continuing saga of Dead or Alive Xtreme 3, and many other Japanese games that share a similar fascination with the female form, is interesting in itself, and worthy of continued discussion and analysis. Is a game like Dead or Alive Xtreme 3 exploitation or harmless entertainment? Is it problematic or progressive? Few games have managed to inspire such an aggressive debate (from all sides) as this one has, and in many respects that whole series has become the poster-child for games that make heavy use of sexuality as a core theme (for better or for worse).

I’ve formed plenty of my own commentary around the Dead or Alive series in the past, often enough. It’s a topic that holds a special interest to me, because as I was interviewing Japanese developers around the topic of representations of female sexuality in games, I was given a very different narrative to what we see repeated ad nauseum here in the west.

To be specific, the community of fans that rally around games such as Dead or Alive Xtreme 3 see the character designs and art more in terms of pin-up than the perverse replacement for pornography that many in the west attribute to them. Sexy, not sexualized. Fun, not sleazy. Pin-up art is most definitely a legitimate genre, or discipline, and there have been plenty of feminist artists, critics, and academics that find the style to be empowering and/or liberating. The pin up ultimately serves to celebrate, not denigrate, the female form and feminine sexuality.

But that was just my analysis, and the analysis of a bunch of game developers that (obviously and reasonably) were proud of their work. So I have continued to investigate the topic further. Something that occurred to me was to see what pin-up artists in other fields thought about the work being done on the female figure in game design.

So I had a chat with Carla Wyzgala, an amazing visual artist that works in comic books (titles include Surreality, We Can Never Go Home, Amy of Darkness and Life Among the Unmotivated), and who regularly dips into the pin-up genre, while also deconstructing and re-working it in interesting ways. I showed her a couple of examples of game character design and constuming that, to me, is very much in the pin-up style that has generated some (or a lot) of controversy around their portrayal of women (Dead or Alive Xtreme 3, Dragon’s Crown, and Risette from Persona 4: Dancing All Night). Then, I asked whether she felt that they belonged to the same pin-up tradition that she has a great respect for.

“I think this creative and interesting way to dress up the female form is a form of pin-up in a different way from the traditional” Wyzgala said. “I think the outfits themselves are fun and the body types, even when exaggerated, are a celebration of the female form.

“I think the more we exaggerate, the more it crosses the line into offensive for some people, but I for one think it is an expression of style from the artist. I would not enjoy seeing character designs of completely realistic everyday people, and yet many complain that the bodies are not realistic. It is frustrating as an artist to feel restricted by non-creatives wanting things to be more “real life” when as an artist we are always inventing and expressing new possibilities.”

So what is objectification?

That’s not to say that it’s impossible for a character design to be an example of objectification. There are clear lines that determine whether a female character is expressing an empowered kind of sexuality, or is simply being sexualized. To Wyzgala, it’s in whether a character’s design also reflects a control over her sexuality, and whether we’re being presented with a character of intelligence or not.

“Pin-ups really only bother me when there is no soul behind her eyes, as though she is indeed a blow up doll. This is something I incorporate in my work, giving them the spark of intelligence in their expression. Another contributing factor that I think leans towards the objectification spectrum is her vulnerability. Does it look like she is comfortable in the situation? Does she still have her dignity? If those answers are “yes” then I feel it is more of an empowering piece. Even if we are talking about the pin-ups where the woman is “oops!” caught in the moment, she should still have a sense of class and dignity.”

So let’s consider that in the context of the characters in the games that Wyzgala and I discussed. Risette from Persona 4/ Persona 4 Dancing All Night is very much an empowered character. We see her go through a coming of age process (as with all characters) in Persona 4, developing through her personal conflicts over the nature of her celebrity as a teen idol into being comfortable and confident with who she is.

And when there’s the “oops!” moment, as Wyzgala puts it, when the boys accidentally walk in to the public baths as she and her friends are using them, the comedy of the scene is at the expense of the boys, who fail to “see” anything under a hail of protesting projectiles, and also miss out on their own opportunity to use the bath.

Dragon Crown’s protagonists are all every bit as powerful in combat as their male peers, and have a range of special abilities at their disposal that the men do not. Where Dragon Crown does have issues is in the way it presents players the opportunity to “rescue” half naked prisoner girls, which are depicted in such a way that does step over the line, but the design of the heroes themselves is a glorious throwback to a distinct sub-genre of pin-up; the fantasy hero art that was so popular in fantasy literature and pen-and-paper games of the 80s and 90s.

Dead or Alive itself features a whole load of “oops” moments – the fighting games make a great deal out of the flash of underwear that bystanders will see if a woman performs Tai-Kwan-Do kick routines while wearing a miniskirt. Extreme 3 has swimwear that can “snap” and start to fall off. But at the same time, each of the characters is presented as every bit the equal to the male fighters, and the series lead hero is female (Kasumi). The narrative of each fighting game, disjointed and underdeveloped as it typically is, is careful to avoid the male characters ever dominating the women, either physically or in their social and political roles, and are often the subject of teasing and playfulness in which the women hold the upper hand. And the island resorts that the girls relax at in the Xtreme games are male-free environments. In other words, in these games, the dignity of the women is never compromised by the presence of men.

As you can see from the images in this piece, Wyzgala’s own work has a lovely alternative approach to the traditional pin-up genre. Her character designs often have exaggerated, sexy, poses, but at the same time there is an earthiness and honesty about how they are portrayed that is classy and clean.

“I personally tend to focus on beauty, not necessarily on a superficial level, but more about what makes a woman feel beautiful to herself,” Wyzgala said. “And sometimes this is shown in her pose, sometimes in her outfit or hairstyle.

Her inspirations are varied, too, with everything from Xena: Warrior Princess right through to anime informing her own sense of aesthetics with the female form. “I have been influenced by the pin up work of Elvgren and also from basically any strong female that has had an impact on my childhood. Sailor Moon, Spice Girls, and Xena are just a few of the ladies who I have been drawing since being a small girl and not understanding that the outfits they wore were “sexy”.

“I have always found myself drawing women in revealing outfits and never looking at it as a gateway to sexual behavior. It is simply something that is beautiful to me,” Wyzgala added.

“When thinking of pin-up art, I think of retro styled classy ladies in odd situations. The masters who painted these for magazines back in the day, Elvgren and Vargas to name a couple, are certainly some of the best artists in my opinion. It was art then and it is still art now, even when portrayed with photography and modern styling. I feel that it stays in the realm of art when there is intentional creativity and inventiveness at work to create the image.”

You can purchase some of Wyzgala’s work here
Share this