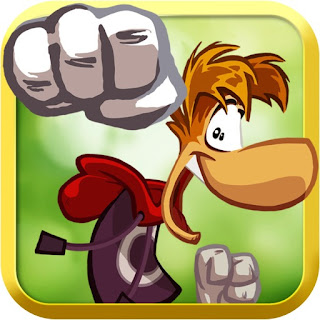 Endless runners are a popular trick for iOS developers. They’re relatively easy and cheap to throw together, and a good natural fit for iPhone gamers looking for a way to waste a few minutes at a time. Sure they’re about as simple as games get, but sometimes that’s exactly what you’re looking for.

With that as context, I was very worried to hear Ubisoft was developing an endless runner clone and sticking Rayman in it. Thanks to his recent console outing, Rayman has become my favourite platforming hero, and the very thought of removing that D-pad control over which way Rayman moves for some reason distressed me greatly. It was needless – aside from the lack of control over the direction of his movement, Rayman Jungle Run is a genuine Rayman game, and is by far the best endless runner I’ve ever played (not that it’s technically an endless runner – levels are over very quickly, in fact, but it belongs to that overall genre of single-button control platforming).

First, the art work. As a bid to squeeze a bit more value out of the investment in the Ubi Art framework (fair enough, since Rayman Origins wasn’t exactly a mass-market hit), Ubisoft has applied it to Rayman Run. As a result, Rayman Run looks stunning – I would be hard pressed telling the difference between this game and the HD Rayman Origins without putting the screenshots side-by-side. Rayman is animated slickly and the colours in the environments are vibrant and energetic. The music that backs up this visual style is, as anyone who has ever played a Rayman game before would know, happy and charming. 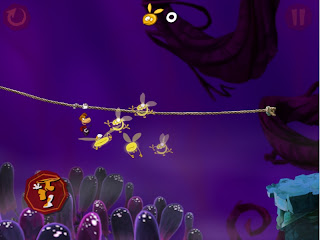 The ‘toon style belies a penchant to torture its players, however. Rayman has never been known for easy games, and Rayman Run continues that style. Levels are filled with traps and other such nastiness, and thanks to the general speed of the game those traps have a habit of popping up a split second before you’ll need to react. The fact that the game is controlled entirely with a single button (to jump, and contextually to do some other actions) doesn’t actually help. To up the stakes even further, each level is filled with things to collect, and a level isn’t properly completed until a perfect run has been achieved.

The reward for perfect runs? Unlocking even more difficult levels. Though on the surface there isn’t much depth to the game (roughly 30 levels and a few unlockables, each only taking 40 or so seconds to complete), the high difficulty curve will keep people playing far longer than the initial impressions would suggest.
Even if you manage to fly through those levels, and assuming you’re human, you’re going to be having too much fun to really care. The levels are, each and all, expertly crafted. While each level is on auto-run, it also has all the branch swinging, wall jumping and enemy slapping hijinks that we’re used to seeing in the ‘real’ Rayman platformers. Because the levels are short, death is not frustrating, and because deaths are not frustrating, replaying levels over and over again to get that perfect score is a pleasant challenge rather than something to give up on.

There’s not much else to the game, but it doesn’t really need much else. It’s a perfectly self-contained little game, and a brilliant extension of Rayman’s universe on to iOS game platforms. Considering we’ll never see Nintendo follow suit, it’s hard to imagine a better classic platform character popping up on the iPhone and iPad.

Our recommendation though is to mirror the game through an Apple TV and AirPlay and get into this one on your TV. What you lose in mobility you get back with the simple fact that it’s so damned good to look at as you play.