Point-and-click adventure games are, in my humble opinion, the bread-and-butter of video games. After all, where would we be without such gems as Monkey Island, Myst, and Grim Fandango?

Daedalic Entertainment’s The Whispered World was originally released for PC in 2009 or 2010, depending on your location. It is a classic point-and-click adventure game from beginning to end. Six years after the original launch, it has now arrived on iOS. Tablets and point-and-click games go wonderfully together; expanding on my previous bread-and-butter analogy, point-and-click games on iOS are like the jam that goes on top of the bread and butter. Some are deliciously wonderful, and others leave a sour or bitter taste in one’s mouth. The Whispered World somehow manages to do both.

Related reading: Nick’s review of The Night of the Rabbit, another point-and-click game published by Daedalic Entertainment, on PC.

The first thing I noticed upon starting up the game is the graphics. They are hand-drawn and 2D, with a parallax effect, and it is absolutely stunning. Normally I wouldn’t discus the visuals until an end of review, but in this game they are so amazing that I’d be willing to play it even if the game itself was awful, just to be able to take in dozens of different locations in the world of Silentia (where the game is set).

The second thing I noticed is that the voice of Sadwick, a sad 12-year-old clown who is the protagonist, is the single most annoying voice I have ever heard in my life. The rest of the voice acting is decent, but if I never hear Sadwick’s voice again I would be quite happy. The audio editing is also poor, with the audio cutting in after the spoken words have started; it’s not a big thing, but it’s certainly noticeable.

The Whispering World’s story takes place in Silentia, and (as I mentioned) follows Sadwick the clown. Sadwick has recurring nightmares about the world being destroyed, but once he is given the powerful Whispering Stone he becomes destined to be the one to cause the destruction. It’s an interesting twist on the usual heroic tale, as the protagonist is also (in a way) the antagonist. Sadwick travels with his circus family: his snarky brother Ben, his senile grandfather, and his pet worm named Spot. Spot isn’t just any pet though, as he can transform into various forms (unlocked as the story progresses) and can be used to solve puzzles.

The controls are relatively straightforward. Touch items to bring up an interaction menu that includes options to look at, touch or pick up, and speak to. There’s a magnifying glass icon on the screen that you can touch to display an overlay of what items are able to be interacted with, which is helpful if you begin to get stuck or confused. Sadwick’s inventory is accessed through an icon with a drawing of a bag. Items can be dragged from the bag to interact with the world. The entire control scheme is very intuitive, and quickly becomes second nature.

Often, you’ll encounter puzzles. The puzzles are good. That truly is the best word to describe them: they aren’t the best puzzles I’ve ever had to solve, but they are also far from the worst. Some require extreme patience and excessive amounts of going back and forth to find that one thing that was missed, but that isn’t unexpected in a game such as The Whispered World. Being able to use Spot’s various forms to solve puzzles was a nice touch, and was probably my favourite part of the game (aside from the graphics).

Something else of note is that there is far too much dialogue in The Whispered World. I don’t mind dialogue, and can usually happily read in-game speech bubbles for hours on end. But half of it seemed completely unrelated to the story and just made me want to click through it quickly to move on to avoid the combined tangents and poor voice acting.

Perhaps I would feel differently about the dialogue if the Special Edition didn’t include game commentary. There’s is a permanent icon of two guy’s faces (they are the game’s writers) in the game’s interface. The icon is reduced in colour and opacity when there is nothing new to be said/read, and full-colour when there they have something new to say. I really have zero interest in game commentary during a first playthrough, and being unable to remove the icon from view was an annoyance. It would have been preferable to have an option to turn commentary off so the icon goes away. 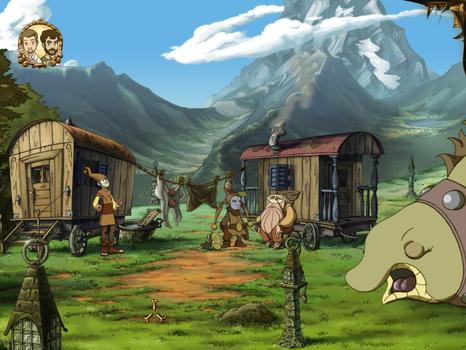 Related reading: For a second opinion on the game, check out Pierre-Yves’ review on the PC release.

And so we return to the dilemma of The Whispered Worlds: its high points are really high, but its low points are incredibly low. The hand-painted graphics are enchanting and the story is strong, but the voice acting (and sound editing) and commentary really take away from the enjoyable aspects. The end result is something worth a play, but that I wouldn’t consider returning after the first completion.