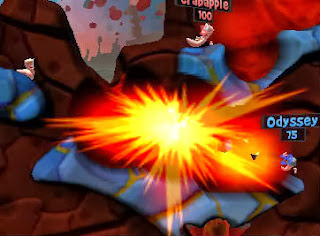 Well, it was inevitable that Worms would eventually make its way to the PlayStation Vita. The folks at Team 17 have adapted the insanity to every other platform, so why not also Sony’s powerhouse?

Now, these games don’t have a good track record on the handheld consoles, it must be said. It wasn’t until the Nintendo DS that a portable Worms title has been even playable, let alone entertaining. But, after the iPad’s rather excellent Worms 3 release, and the sheer quality of the original Worms Revolution, I had high hopes for this Vita title.

I was disappointed in my first impressions. The graphics are badly compressed, and the environments especially are a blurry mess. The Worms themselves still have their characteristic personality, but the framerate also tends to stutter and in general the game is poorly optimised for the Vita hardware. After the gorgeous HD Worms experiences I’m used to, this feels like a regression. 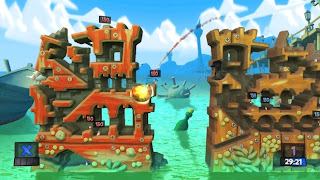 There’s also the simple reality that Worms games are best experienced in local multiplayer, where the beers, chips and insanity more that adequately compensate for a core gameplay that is just that touch too simple for real strategy fans to get involved with. Online multiplayer isn’t really condusive to that party game atmosphere and while the developers have offered plenty of content in single player, it’s not really that engaging over the longer term.

With that said there aren’t that many strategy games on the Vita right now, and so Worms is a nice, light bit of variety in the library.

The game itself is as simple as ever, but the Worms games have always been supremely balanced, and this is why people keep buying them generation after generation. Extreme is much the same. Battles follow the tried-and-true structure for a Worms game; for the first couple of turns the Worms on the edges of the battlefields are subjected to swift baseball bats in the face, which sends them flying into the water and out of the match. From there the pace slows down slightly as the remaining worms take aim at one another with more skill-based equipment such as bazookas and grenades. 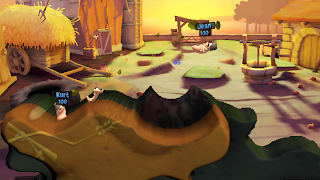 The battlefield is slowly blasted away by these weapons, and the weapons people have access too grow increasingly powerful. Eventually there is one worm left standing. Then it’s time to start the next match.

There’s a point in each match were tactics and skill stop playing a role because the weapons are so powerful. The developers have tried to do something about that through the “forts” game mode, which positions the teams in quite complex structures at the start of each match, but if I’m being honest, I can’t see anyone playing a Worms game for its challenge or depth. It’s about having fun, and the fact that Extreme’s port is so poorly optimised for the Vita platform aside, it is great that Vita owners have access to this kind of the fun when on the go.

Interview: Aussie indie on game development and the challenges of Kickstarter