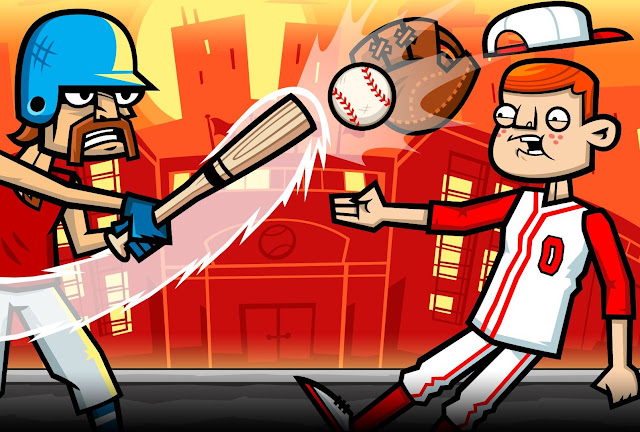 Baseball Riot is a sequel to Tennis in the Face, and on closer inspection, it’s close to identical. Once again an evil soda corporation has brainwashed a bunch of people (in this case, players of a baseball team), and it’s up to you, Gabe Carpaccio, to save your former teammates from the Explodz Inc.

Taking most of its cues from Angry Birds, Baseball Riot places the player’s character somewhere on a map, and then sets them the goal of hitting objectives in the field within a certain number of shots. Unlike Angry Birds, which general features open spaces and requires the use of gravity in many of its puzzles, Baseball Riot plays out in an enclosed area, opening up the implementations of angles by bouncing things off the walls and ceiling. This system is actually quite fair and predictable, meaning success is entirely skill-based, and believe me, it makes me feel much smarter when I’m able to take out nearly all objectives in one go, from a clever shot. That said, once the enjoyment about this skill-based play is the game loses the re-playability appeal rather fast. Once you have completed a level, there is very little motivation to go back in an attempt to beat your score.

There is diversity in the 100 or so levels, with each area introducing a new enemy type in their attempts to hinder your goal. The aim of each level is to knock out all players, and collect the three stars, all with a limited amount of balls to use. It’s the standard three-star ranking scoring that most mobile games implement nowadays, though you will also be ranked based on how many balls you have left over. It’s also interesting to note that Baseball Riot is being released across multiple platforms, including iOS and Android, at the same time. Normally it’s a case of sell this kind of game on handheld devices first and then move onto bigger screens. Naturally, the platform Xbox One platform means that these mobile game mechanics meant to encourage quick play times are lost. It takes as long to boot up as it does to complete a level, and in doesn’t offer anywhere near the kind of depth you’d typically want from a big-screen experience. 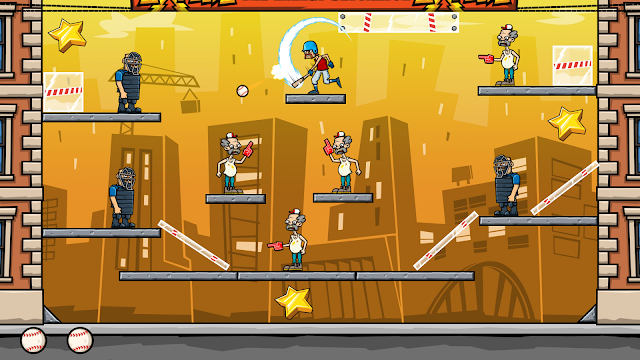 There is a certain charm that brings enjoyment to Baseball Riot though. There’s something to the cartoon art style that works for this title. It’s silly, and a little bit of fun, though on a large screen, its quality and level of detail is lacking a little; something which smaller mobile screens wouldn’t suffer from. The presentation also brings quite a bit of humour along with it, yet sadly the charm of this wears off relatively quickly with many jokes being repeated.

Related reading: Our review of Tennis to the Face, Baseball Riot’s predecessor.

More than anything, it’s the crushing lack of originally that really does let down Baseball Riot. I don’t think it’s that hard to do something original, even when sticking to proven ideas. Heck, Tennis to the Face did just that, and the lack of innovation from that game to this one makes Baseball Riot seem like a cheap cash in. And a cheap cash in on a cheap mobile-style game is not a good combination.