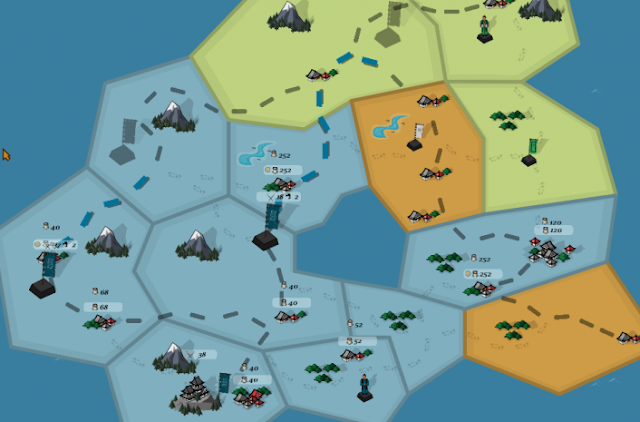 Tenshu General is a real time strategy game modelled after tabletop wargames like Risk, set in the Edo era of Japan and featuring up to four players simultaneously vying for superiority. Developed by Dutch indie studio Smart Game Studio B.V., Tenshu General is a slow paced RTS focused more on efficiency and long term planning rather than overwhelming your opponent. With a design ethic focused on elegance, the game’s systems are heavily simplified and are immediately accessible but also somewhat shallow.

In Tenshu General, each player takes the role of a Japanese daimyo commanding armies from a fortified castle. Japan is factioned into a series of small states and by sending your armies around the map you can claim their loyalty and increase your income. Games can be played with two, three or four players and end when one player manages to successfully besiege every opposing castle to emerge as ruler of Japan.

The meta of Tenshu General is focused entirely on its single resource – rice. Rice is generated from every farm in territories you own and can be spent in order to purchase more military units or upgrades to improve your rice production. The deciding factor between success and failure as a general lies in your choice to spend your income on your military or economy: farms that you build are persistent and give their bonuses to your enemy if they manage to capture it, so overspending on economy can lead to disaster. Overspending on your military is also not a great idea, since an enemy who spends more on their economy can eventually make units at a faster rate than you can, beating you out in the long run. Strategic players will learn to manage their funds well and adapt to the movements of their opponents. 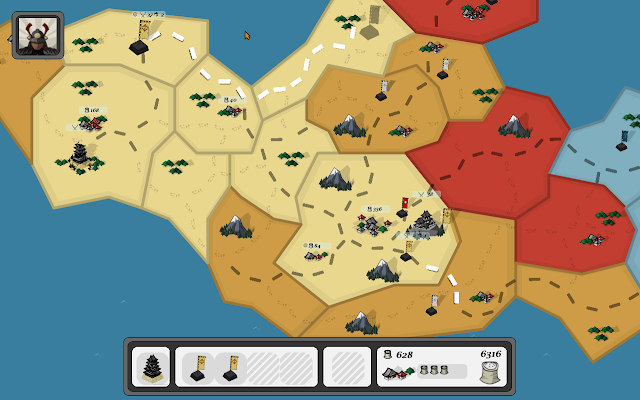 The other key concern for players is map control. Each player is given a single army to start with, which is represented by a moveable flag. A player can purchase more, to a maximum of four, and can fill their army with up to four infantry, archers and cavalry each. Armies move in real time and automatically capture territories they stop in. Two allied armies can’t occupy the same territory, but if an allied and an enemy army stops in the same territory, they do battle. Battle is a simple affair resolved with a click of a button – the side with more troops wins and both sides suffer casualties proportionate to their opponent’s attack. Each territory has a different type of terrain which slightly influences the power of certain types of units, but it’s not a huge bonus and hard to strategically plan for.

The strategy is actually quite well balanced for a game like this. There are various instances of randomness and misdirection which create the opportunity for big plays. For example, you can see all your opponents farms and income, but you can’t actually see how much rice they have stored up for themselves. Similarly, you can see your opponents armies and can estimate their strength based on the size of their flag, but you can’t actually see the exact composition which makes fighting an army roughly the same size as your own quite a risky manoeuvre. Similarly, there’s an element of fair randomness in the battle system – sometimes when two equal strength armies clash, they’ll wipe each other out entirely. Other times they’ll leave one or two stragglers. There will never be an instance of one army beating the other when they are supposedly even however. These scenarios keep the player adaptive to their circumstances and it manages to liven up the gameplay without any feeling of unpredictability.

The main problem with Tenshu General is that it’s just too bare bones for its own good. The current release features a campaign/tutorial and a skirmish mode. The campaign teaches you the basics of the game with a final mission as a four player game, but there’s no real story or characters to keep you strung along. Skirmish mode gives you a variety of maps, scenarios and opponents, although while there are multiple characters there’s actually no difference between them aside from starting positions. Because of this, you can largely use the same overall strategy for every map and still win. The endgame also drags out far too much, with castles that can wipe out fully upgraded armies and stalemates that go on for far too long when playing with human players. There’s enough content to be fun for a while, but right now Tenshu General is riding on its mechanics when it really needs either a stronger narrative or more varied ways to experience the game. 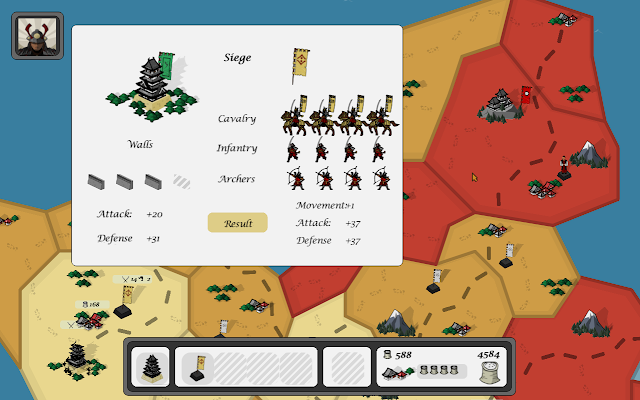 Related reading: For one of the finest digital board games ever made, consider Armello. Nick’s full review.

As it is, Tenshu General is a competent adaptation of a tabletop style board game. Unfortunately, its lack of depth, content and narrative leave it feeling like merely an engine with good ideas and not much more. The campaign and skirmish mode is enough to keep players entertained for an afternoon or so, but by the end of it you’re not making strategic decisions as much as you are going through the motions. With some patching, there’s definitely a good game in here, but currently the experience is shallow.