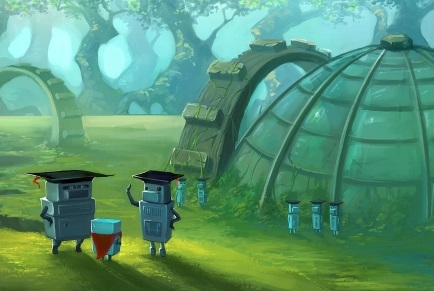 I love ambitious games, I really do, and Poncho is nothing if not ambitious. From the very beginning it evokes a sense of wonder through its lavishly designed sprites and Mode 7 parallax scrolling, taking you through a great cataclysm before throwing you into the shoes of Poncho, a small robot trying to make sense of the past in a post-human society. Developed by three-man team Delve Interactive and published by the always entertaining Rising Star Games, Poncho is a puzzle-platformer with an open world and a big focus on adventure.

This is definitely a game where the little details come together to make everything work. The game is set in a post-apocalyptic landscape inhabited by robots, with some remnants of human architecture still remaining. The developers have taken many creative liberties with the setting and each little platform has a narrative purpose, so exploring the world is a real treat. As I play, I’m reminded of old-school indie platformers like Knytt Underground and Cave Story, which were fantastic because they were passion projects and not the formulaic commercial titles that had no incentive to go above and beyond in their design. There are also some fantastic setpiece moments woven into Poncho which will make your jaw drop in the way only a special game could – and that’s certainly a big achievement when Delve Interactive are working with nothing but sprites and parallax scrolling.

Speaking of parallax scrolling, Poncho is a game which makes a mechanic out of the once loved visual gimmick. The world is split into three layers and with the LB and RB buttons Poncho can flip into the foreground or the background. We’ve seen this mechanic used a lot across games such as Donkey Kong Country Returns or Mutant Mudds, but Poncho takes a unique spin on the concept by not designing levels around the layers. This sounds counter-intuitive at first, but it makes so much sense when you start playing. When you’re platforming, you want to be reaching a certain goal. In other games, jumping into the foreground or background is a means to achieve that goal, and you’re forced to take that path as part of the level design. In Poncho though, you’re not forced to do anything. When you see a key, a gem or a gate in Poncho, you know that you can get to it but thanks to the three layers you also have multiple ways of getting to it. You really get to feel like an explorer when the game’s design gives you these choices and you make your own way to where you want to go, instead of successfully pressing some buttons in sequence until the game deems you skilled enough to advance. 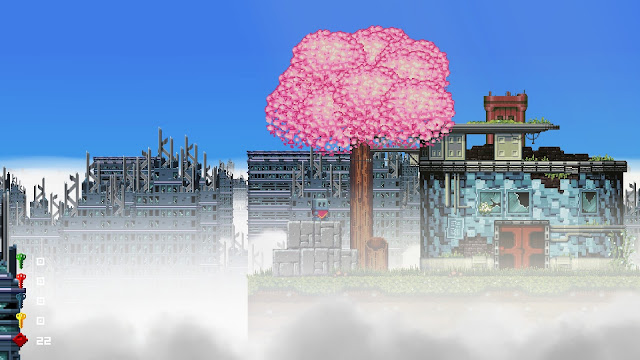 With every upside comes a downside however, and Poncho’s is that the freedom offered by the layer switching creates an incredibly unbalanced difficulty curve. The game is divided up into zones which are a few screens that wrap around – go far enough to the left or right and you’ll end up where you started. Progression is determined by finding a teleporter in each level which will allow you to go to the next, and also by a series of coloured keys and locked doors. Unfortunately, some of these doors are optional and it is possible to mess up your usage of keys and make it impossible (or at least very very difficult) to advance in the game. Add in some of the early game platforming challenges which are unfairly tough when you’re not used to the mechanics and this game can be a frustrating experience indeed. There aren’t a lot of enemies in Poncho but there are bottomless pits and you’ll be falling down them a whole lot. These downsides are all a necessary consequence of true exploration gameplay, but they are still big turnoffs for anyone looking for a relaxing experience.

Thankfully, the production values on all other departments are fantastic. The graphics are gorgeous and the music is catchy enough that you’ll hum it well after you’ve stopped playing. The story is engaging but largely implicit, though there’s so much character woven into the world’s design that it’s not too hard to feel like Poncho has a great story to tell. The game pulls off the adventure – mystery atmosphere perfectly and it gives you just enough context to make you want to find out more.

Related reading: And a discussion about indie platformers wouldn’t be complete without a mention of Shantae.

Poncho is that kind of indie game you have saved as an .exe file somewhere in the depths of your computer. It’s something you stumble upon and unravel at your leisure, but you keep finding out that it gets deeper as you go. It manages to be a puzzle platformer which transcends figuring out patterns and jumping on things, and while the basics need polish it’s definitely a title which deserves your attention.