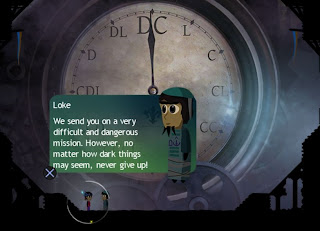 I love foreign films because in watching them I learn something about the culture and environment that the film director, writer, and other artists involved in the production live within. It’s great to see the games industry start to follow suit, with independent developers across the world creating games that are unique to their home culture.

Knytt Underground is an example of this kind of game. Coming to us from Swedish independent developer, Nicklas “Nifflas” Nygren, Knytt Underground is a wonder to behold, and is both beautiful to look at, and deeply engaging to play.
A Knytt is, to the best of my understanding, a mischievous fairy or spirit in Swedish mythology, and from start to finish Nifflas runs this theme of mischief right to the core of his game, constantly playing with a player’s expectations and twisting them on their head.
For instance, if you were to just play the first chapter of the game (of which you can watch some of it in the video below), you would expect a fairly lonely and standard 2D platforming experience with some interesting puzzles thrown into the mix. You certainly wouldn’t expect to meet Dora and Cilia, two fairies that decide to accompany the leading lady; the mute Mi, and speak on her behalf. These act as the “angel” and “devil” sitting on the shoulders of many past and future heroes and heroines in narratives (though neither could be rightfully called “good” or “evil,” their roles are far more complex than that black-and-white delineation), and from that point on a player’s morality is suddenly called into play when responding to a request from one of the world’s inhabitants. It’s only then that it becomes clear that the first and second chapters of the game are, while meaty experiences in their own right, nothing more that tutorials; the real game, complete with extreme length and narrative complexity only begins in Chapter 3, and that massive world is simply teaming with meaning. 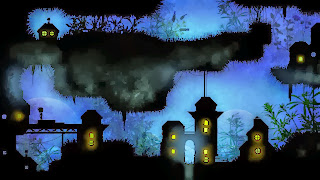 Scandinavian artists have long struggled with the topics of religion and spirituality in their work, and Knytt Underground is another manifestation of that struggle. In theory Mi’s Chapter 3 quest is to ring six special bells and prevent an apocalypse. She’s compelled to based on what passes for religion among the Knytts, and dutifully she goes about that quest. But then characters (including Nifflas himself for some 4th-wall breaking action) start to pop up and question the purpose of the quest, right down to whether the apocalypse really will happen if those bells are not rung. Cilia, especially, takes on the role of the skeptic, and many of the arguments that she makes (foul mouthed as they are) are compelling and seem to ring true. If you’re anything like me you do start to wonder whether there is actually any purpose to the quests and its many dangers.
Ultimately, through a lot (and I do mean a lot, I can’t think of any other platformer that has this much raw content) of exploration and puzzle solving, Mi succeeds in ringing the bells and a generally vague narrative draws to a close, though I’ll leave that question about whether Mi finds the metaphoric God for you to either spoil for yourself or experience by playing the game. In many ways, then, this game can be seen as a similar work to John Bunyan’s The Pilgim’s Progress in that the lead character is subjected to a near endless stream of temptations and challenges to the faith, but is offset by a sense of inevitability to the journey; the character must complete their quest because that is their calling. 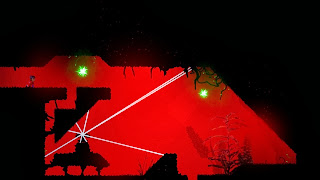 Of course, Nifflas’ work isn’t quite as clear-cut as Bunyan’s, and being an interactive game players are more free to come to their own conclusions on the message to take away from the experience. While The Pilgrim’s Progress is steadfastly Christian in its outlook and thesis, Knytt Underground is more interested in a general view of spirituality and the need that many feel to wholeheartedly work towards something where the consequences of their actions are not a guarantee. Despite that key difference there it’s difficult to argue that Knytt Underground is not a deeply spiritual experience.
From the spectacular environments to the gentle, tranquil soundtrack, the world of Knytt Underground is a serene one in which tranquility and awe rule the day. There’s a pacifist theme that runs through the experience, with enemies being exclusively puzzles to overcome and not goons to be slaughtered, and while Mi herself runs and jumps around the environments with a great deal of athleticism, the game requires a methodical, calm frame of mind in order to work your way through all of its puzzles.
There aren’t that many “art games” on the Wii U, or games that challenge players on a deeper, more philosophical level, so it’s good to see that this one is there. It might be a little challenging for some people to connect with, as it is a very traditionally Swedish way of thinking distilled down into the form of a game, but it’s worth persevering with, because as subtle as Knytt Underground often is, it is a true marvel in intelligent game design.

Merry Christmas; from the depths of our hearts