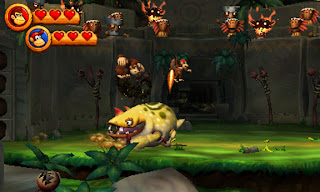 For some reason I missed the original Wii release of Donkey Kong Country Returns. I’m not sure if it just released at a really busy point in time, of it I was broke, or if it was some other reason, but despite loving Rare’s Super Nintendo trilogy, I skipped the reworking of the classic formula.

So I’m back to remedy that with the 3DS release of the game, and I’m probably one of the few critics reviewing this game as the first time I’ve played it.

The good news is that the game is undeniably brilliant. From start to finish this new adventure tracks the fine line between nostalgic indulgence and modernisation perfectly. The music is the most immediately noticeable way in which the desires for the old and the new balance out perfectly. Many of the tunes are familiar, yet remixed to not feel dated. The new music tracks are thematically spot on and help break up a soundscape that could have otherwise felt uncreative. 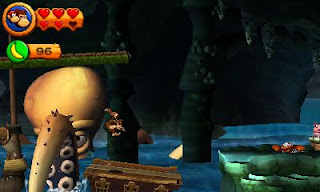 Everything else about the game then follows the lead of the music; taking the old Donkey Kong Country that we loved so much, and just tweaking things enough to give us a new game. I laughed out loud when I got mid-way through the first world and encountered a level filled with those explosive barrels that I needed to blast the team between. I laughed because I remember as a child having a nightmare of a time trying to get through a level built on the same concept in the original Donkey Kong Country. The mine cart levels, which where the bane of my childhood gaming experience are back and just as nasty as ever. Even the rideable Rambi the Rhino is back – though I guess a Donkey Kong game wouldn’t be one without Rambi.

The game’s levels are challenging (even with an ‘easy mode’ for the less experienced gamers); another nod to the crushing difficulty that the original SNES games were able to provide at times. But at the same time Retro Studio’s difficulty seems somehow fairer – testing a player’s skill more than his/ her ability to react to sudden hazards. It’s also quite generous in dishing out the lives, so players will feel challenged to progress through the game, but they won’t feel under pressure of the ‘Game Over’ screen; another nice concession to the new without forgetting the old. 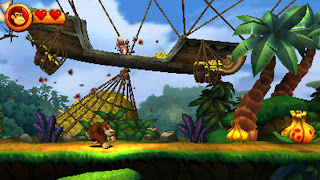 Perhaps the biggest change the game has made is in the partnership between Donkey and Diddy. Back in the day these two characters had different abilities, but controlled independently, opening up the opportunity for some fun multiplayer, but having a minimal impact on the single player game. In this game the multiplayer is still fun, but for single player games Donkey and Diddy work far more effectively as a team. When the big ape rescues the little monkey, Diddy jumps on Donkey’s back and supports the team by offering a limited jetpack boost to difficult jumps. It’s a small addition to the overall frame of the game, but it really works in terms of giving players a boost for playing well enough to have two characters on board.

The not-so good news about this game is that it doesn’t really belong on the 3DS. The characters are much too small on the 3DS’ tiny screen and though the 3D effect looks good, it’s an eyestrain as a result. I’ve noticed in some other reviews a criticism of the framerate – this isn’t a problem I felt as there was no actual slowdown while playing, but what was harder to reconcile is the limited controls. The Wii game was built to be played with just the Wiimote, and so everything is done with just the two face buttons. This set-up works, but it’s a waste that, for instance, Donkey Kong’s puff of breath command to blow away a plant and perhaps reveal a treat wasn’t mapped to another button. 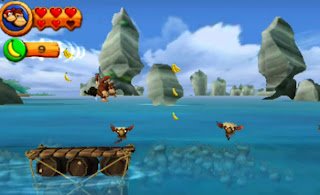 I also have issue with the way the game’s length is padded out. I completed the main story in around a dozen hours, which is reasonable enough, but from start to finish I was made to feel like I wasn’t really getting anywhere in the game. See, Donkey Kong Country Returns seems to have picked up the modern platformer’s ridiculous love of collectibles. It’s not quite as bad here as in some other games, but it still annoyed me that to properly complete a level I now had to track down a bunch of puzzle pieces in addition to the traditional bananas, coins and “KONG” letters from the original games.

Collectibles are fine to throw in for OCD people, but here there are constant reminders to players that they haven’t really finished a level in the game until they’ve found everything. End-of-level screens tell players what they managed to find, the overmap highlights levels that have been “completed” and the main screen itself has that big percentage marker next to it – a percentage marker you’re not going to make a big dent in without finding all the hidden objects.

The puzzle pieces are often incredibly-well hidden. Which would be fine if the game wasn’t perfectly satisfactory without drilling into people that these pieces needed to be found. It’s a sour note to finish with and disappointing because the game is otherwise truly brilliant, but those collectibles are largely why I have given up on the platformer genre. Whatever happened to the idea of building a game where it is fun just to go from one end of the level to the other, and still feel validated that, yes, I’ve finished the game at the end of the last level?