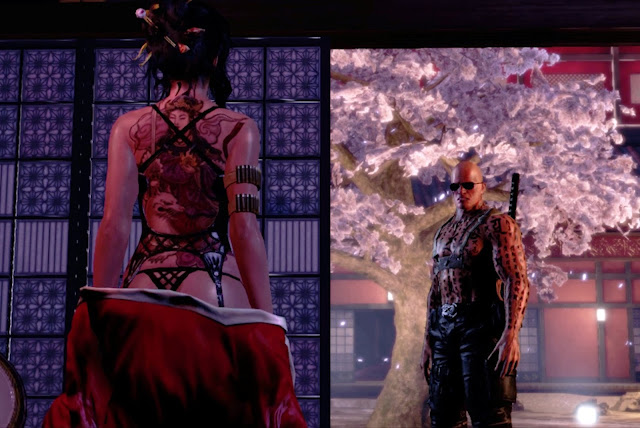 “What do they make these out of?” An all-American soldier asks, after setting down explosives to take down a locked (traditional) Japanese gate, only for those explosives to go boom and the gate left without so much as a scratch. For me, that moment became the defining moment of Devil’s Third experience; it’s a relentlessly transgressive shooter that pitches eastern and western sensibilities against one another, and then does everything in its power to make a mockery out of shooter convention and the western cliches of the genre.

Related reading: Dead or Alive 5 might not be Itagaki’s work, but the series maintains the spirit of its creator. Matt’s full review.

It’s not really a surprise that the game hasn’t resonated with the western media, taken in that context. When Russian anti-hero protagonist, Ivan, tears through enemy lines, relying on his sword as much as his gun, he is ripping through the fabric that binds the world’s most valuable video game genre together. When the game’s turret sections last for just a couple of seconds, it is the director’s (Tomonobu Itagaki) way of giving the middle finger to the nonsense shooter formula that all-but requires developers put turret sections into every shooter they work on. When Ivan’s (American military-type) allies flounder around and fail to blow open gates with explosives, and generally prove absolutely worthless in combat scenarios, it’s less a consequence of poor programming by the team at Valhalla Studios, and more a reversal of the general flow of events in the genre, where the almighty West (typically Americans) get to be the liberating hero.

And the piece de resistance is the level design itself. After spending so many levels marching through city landscapes, airports and a ruined castle (for some Wolfenstein-style mutant zombie horror), all very slavish recreations of settings common to shooters, Ivan and his crew take to the aforementioned Japanese environment. Where every other level meshes hard, cold greys and repetitive building corridor environments, the Japanese level makes the most gorgeous use of colour and tight level design I have seen in a shooter in ages. It’s as though Itagaki and his team watched Phil Fish’s famous speech from years back in which he claimed that “Japanese games suck,” and this was their response; a giant middle finger to show which of the two sides of the fence really has a sense of aesthetics and beauty. 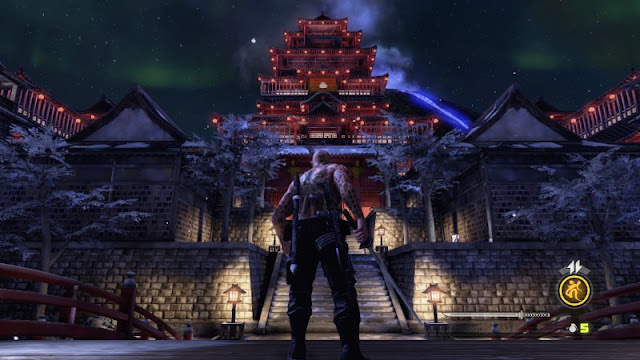 Some might call all of this “bad.” After all, there is a clear juxtaposition running through The Devil’s Third where Itagaki is using what he perceives to be the flaws of western game development to advance the case for an eastern eye for design. Others might be more generous and suggest the “flaws” are a deliberate kind of bad with that in mind. I don’t think The Devil’s Third is bad at all. It’s transgressive, and proud of the fact it’s like no other shooter out there. But for what it’s looking to achieve, it makes its point with wit, intelligence and panache. I wouldn’t be able to finish it otherwise, because I hate shooters as a rule of thumb, but I couldn’t put this one down.

There’s the odd moment where technology lets the game down; the Wii U hampers its more ambitious moments with frame rate stutters, and in an especially (but unintentionally) hilarious moment I had, where Ivan hit a guy so hard that his head got knocked into the floor, and then the rest of the body writhed around for a while with the neck connected to the tiles. But those moments are far less frequent than the other reviews are letting on. For the most part the game enables the action, and the action has a fluidity and pace that I immediately felt comfortable with. Guns aim a little sluggishly, so Ivan is instead encouraged to take enemies on in melee instead, and while the melee combat system is simple, it is elegant, fast, and exceptionally brutal, giving players a visceral thrill as they rend through their opponent’s flesh. Generally the idea is to clear a room of a few enemies with the ranged weaponry, and then get bored of the gunplay, so charge into the remainder with a sword in hand. And it really works. Encouraging players to get up and run around cuts these fire fight sequence length down substantially, and keeps players pushing forward at a crackingly-entertaining pace.

Stitching this action together is a narrative that is far more subtle than I’ve seen anyone give it credit for. Cut scenes are thin on detail, but in addition to weaving the thematic principles that I’ve highlighted previously through their dialogue, the game adopts a tone not dissimilar to what you might expect from a Robert Rodriguez film. This is especially evident through the boss battles. One is a showdown that rends the inside of a church to kindling. Another, a tight battle with a monstrous zombie that has one hit kill attack. Then there’s the battle with a woman that strips down to a g-string before attempting to choke Ivan to death using her legs. Or there’s the thug in a shooter game that can only be taken down using melee attacks. With every boss, Itagaki seems bent on doing something that will break the conventions of what you’re “allowed” to do in a shooter, and while they will surely frustrate (or offend) some, that’s kind of the point to them. 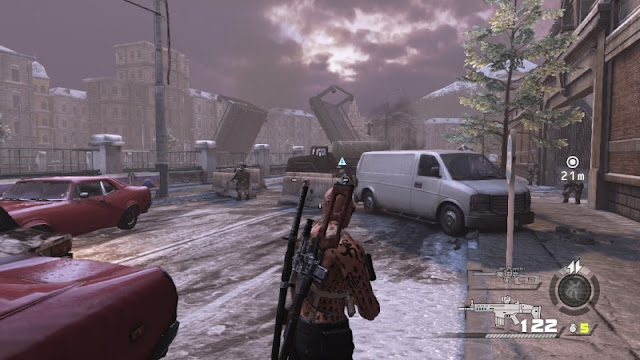 Ultimately all these battles are manageable, even for someone with limited shooter skills such as myself (though I did have to retry that mutant zombie battle a solid two dozen times). The campaign itself knows its limits and doesn’t overstay its welcome: I was done with it in around nine hours, and, again, I’m not good at these games. There’s a score attack mode to give players a reason to come back for a second run, though I’d do that anyway just to experience the story again. Other than that, there is a multiplayer mode as standard for the genre, but almost disappointingly this one plays things down the line, with a standard range of competitive multiplayer options. Owing to the fact the game isn’t that popular, the online community is almost dead already, though given the netcode wasn’t able to handle a deathmatch of four players without stuttering I don’t consider this much of a problem. I was only ever going to play this thing for the single player, and I felt like the campaign ran its length nicely, giving me plenty of memorable moments along the way.

I like to think of Itagaki as one of the three great Japanese game developer transgressives – the directors who are able to somehow fund their creative vision despite repeated, vocal criticism and poor sales… and that creative vision is best characterised as a rejection of the norms of game development that will only even lead to repeated vocal criticism and poor sales. After all, you can’t deliberately dismiss what has proven popular in the past when the reason is has proven popular is because people like it that way. On the high art side of town, you’ve got Yoko Taro. The creator of Nier and Drakengard, Taro’s work is willingly obtuse and philosophical, rejecting convention and form by daring to be pretentious. Good luck fully unpacking Nier without a healthy understanding of nihilism and existentialism.

Goichi Suda, meanwhile, attacks game development as a Quentin Tarantino might. He revels in exploitation “low brow” genres such as grindhouse and splatter, and paints his work with a surrealist brush that typically inverts what we would expect from the genre. Lollipop Chainsaw stops being trash exploitation of a cheerleader in a short skirt when you realise that cheerleader is the most empowered and intelligent character in the game, and her jock boyfriend is literally nothing more than an irritating pervert head. 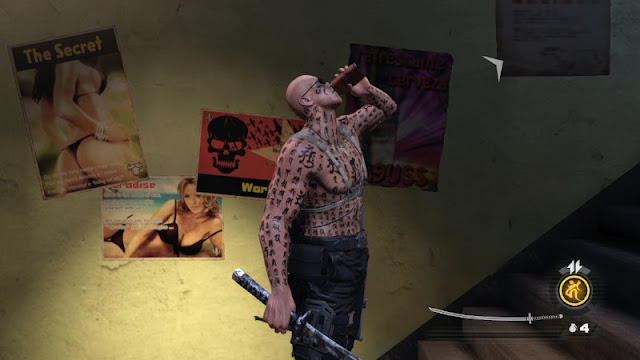 Tamonobu Itagaki, however, is the feisty punk. His work, from Dead or Alive to Ninja Gaiden, and now Devil’s Third, is inevitably crass or lacking in subtlety. It takes every rule out there and sets a torch to it. Perhaps it’s because he’s frustrated. Perhaps he’s even angry with the state of the industry. Perhaps the multiple layers of irony regarding what is and isn’t a “good game” or “in good taste” simply amuses him to the point he’s now laughing at us all. I haven’t met the man and can’t read his mind, but what I do know from devouring all of Itagaki’s work is that it could only be created by a person that perennially has both middle fingers sticking up in the air, and I can only assume that underneath the sunglasses that seem glued to Itagaki’s face there is a mischievous glint going on in his eyes.

Related reading: Perhaps the best film comparison to Itagaki’s work is that of Sion Sono. Tokyo Tribe is an utter masterpiece of punk filmmaking from Japan.

The Devil’s Third is a hell of a lot of fun because it breaks every rule in the book. I would take that, technical warts and all, over the glistening and safe nonsense that we’re exposed to from almost every other shooter out there.

Despite the reviews, are you still interested in, or have enjoyed, The Devil’s Third?