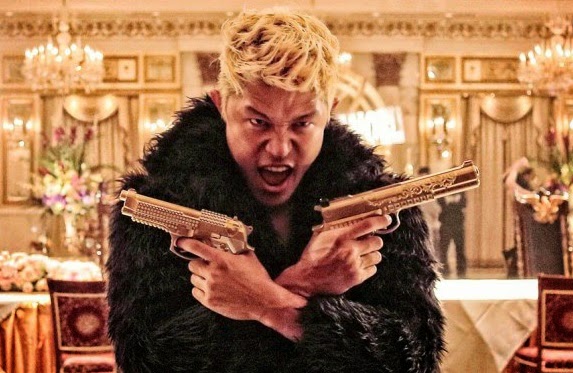 Tokyo Tribe blows my mind. Coming to us from Sion Sono (the same guy that helmed the also-brilliant Why Don’t You Play In Hell?), Tokyo Tribe is a violently clever homage and self-referential parody of grindhouse, exploitation, and yakuza films. From end to end it is an extreme pastiche of a wide range of other films, and it is wild, mind-boggling entertainment in its brazenness. Assuming, of course, you can stomach that excess.

The film’s narrative is incredibly simple, at least. Tokyo’s various gangs, each controlling a part of the city, exist in a state of uneasy truce that prevents any one of them from dominating the others and monopolising the lucrative drugs and prostitution trades. But then one powerful gang makes a move on another, and all-out war erupts. Caught in the middle of that, a young girl from outside of the city is on the run and being stalked, and gets caught up in the middle of it the mess.

The plot is so simple because Tokyo Tribe is actually a musical, and therefore describes much of what is going on through lyrics and action. But because this is a Sono film, it’s no typical musical. Oh no. The music is a dirty, gritty kind of hip hop, and the transitions between music tracks and cinematography make the film look like one very long, very underground, music video. 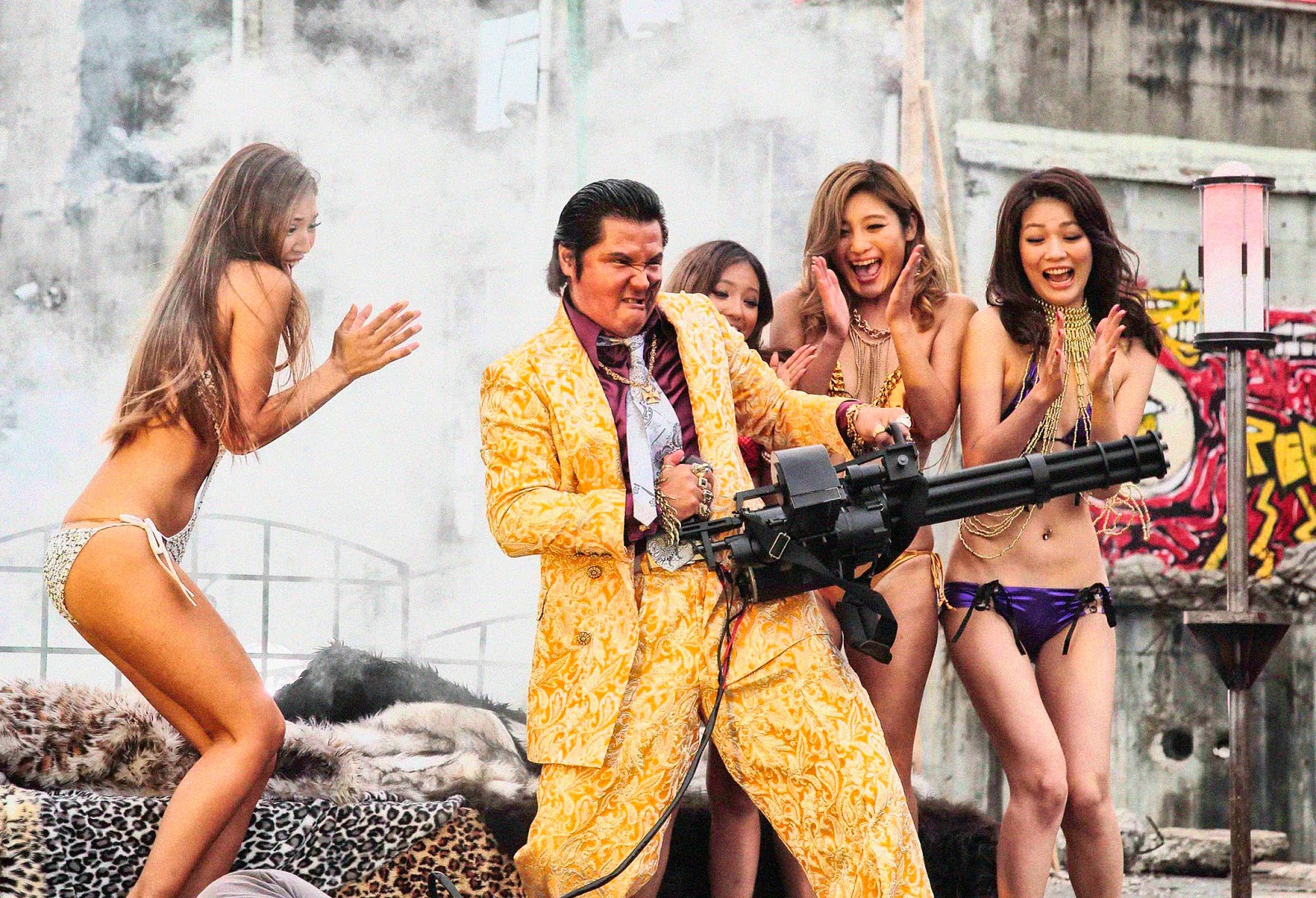 Now, I can’t stand hip hop music. I really can’t. The moment I get on a train and some rat-tailed wannabe punk kid starts blasting the music out of his iPhone (because apparently kids who like hip hop can’t afford headphones), I have to move carriages. The music makes me uncomfortable, and I’m not a great fan of the recurring themes that play out through the genre. But in this film’s case I was transfixed. I suspect part of the reason is that it’s impossible to take seriously. None of the actors are especially great singers, and coupled with the trying-too-hard lyrics, Tokyo Tribe’s first indication that it is a satirical deconstruction happens through its delivery. In fact, I’d be willing to bet some of the actors are actually better singers and deliberately hitting off notes to support the film’s insanity.

At the same time, each and every actor in the very large ensemble cast does a brilliant job of playing up their roles as caricatures, exaggerating delivery in such a manner that is both silly and over-the-top without degenerating into the kind of childish nonsense that we see in too many teen comedies and the like. And, as with Why Don’t You Play In Hell?, Sono demonstrates an eye for beat-perfect casting. Ryôhei Suzuki, especially, is inspired as the brutal crime lord antagonist (you might recognise him from Hentai Kamen), but Sono also has an eye for attractive leading ladies, and Nana Seino, a relative newcomer to film, is both incredibly gorgeous, and despite her small stature, has an impressive physicality which gives her real presence in her many action sequences.

Also like Why Don’t You Play In Hell?, Sono has an eye for real surrealism to go with the hyperviolence and in-out (a cookie to anyone who gets that reference). It’s difficult to take the obese glutton villain too seriously when scenes that he menaces are juxtaposed with scenes where an old woman DJs up some hardcore beats. Sono makes good use of sharp camera cuts, kinetic camera movements, and sharp contrasts between environments to keep his audience on their toes. And so Tokyo Tribe is an odd duck at times:  it’s a surrealist film with a narrative that remains easy to follow from start to finish, but at the same time a film that actively invites viewers to look beyond the narrative to appreciate it on its technical and aesthetic merits. 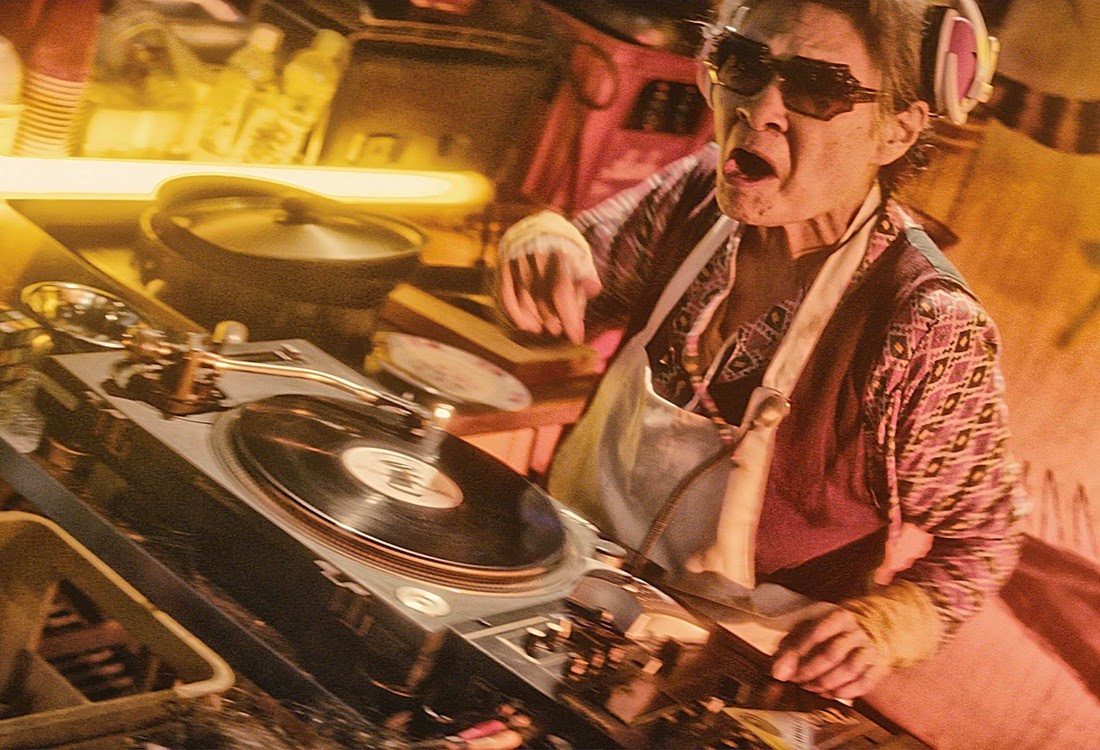 The film’s visual aesthetics, meanwhile, reference everything from Kill Bill to A Clockwork Orange and then a bunch of Japanese films that you’ve probably never seen. Each scene is visually dense, and makes heavy use of both contrast and saturation to creating an interesting mix of utter decadence, and the rotting of a city that has been overrun by crime. It’s very grindhouse-like, and this aesthetic is only enhanced further as the blood starts to spatter and the whorehouse becomes a pivotal setting.

There’s a lot of nudity, as befits the film’s exploitation influences. And, yes, it’s often gratuitous, as you’d expect in an exploitation film. But it’s handled with the same over-the-top excess as the rest of the film that it’s contextual, and often quite humorous.

At around two hours length, though, Tokyo Tribe is a difficult film to sit through in one sitting. There is a point where the excess starts to become physically and mentally draining. At the same time I found it incredibly difficult to put down, because every time I went to pause or turn my DVD player off, Sono would hit me with something so fundamentally crazy that I would sit back on my couch and my eyes would open that little bit wider. 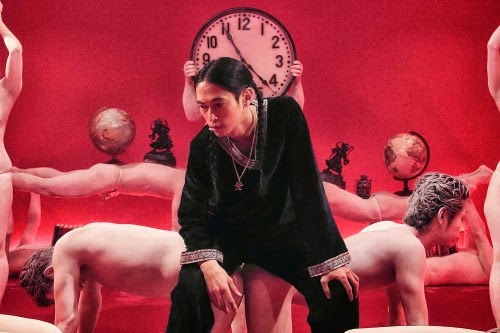 In future film textbooks, photos of this film’s cover art will be put next to the definition of a “cult film.” I actually think, in terms of cinematography, pacing, and raw creativity, that everyone with a respect for film or a desire to study film should sit down and watch this one. Sono is very much a man that takes after Quentin Tarantino – so in love with film that he often uses his work to indulge his personal philosophies about film making, but when the results are this good, it’s hardly something to complain about.

The Friday Ten: Ten essential Virtual Console games for your Wii U