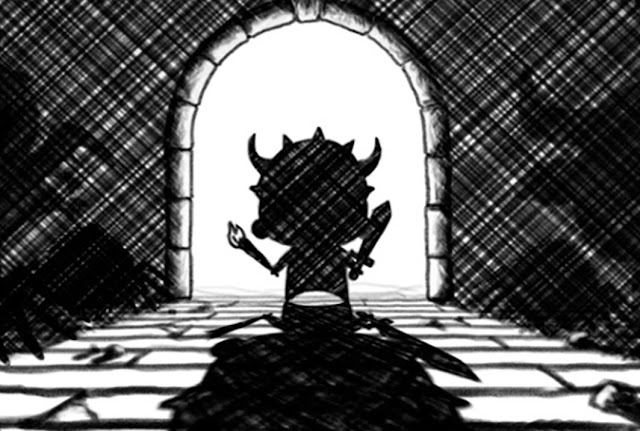 Guild of Dungeoneering is equal parts hilarious and frustrating. It is an interesting mix of genres and ideas that doesn’t do much to present new ones of its own. It is somewhat like a treasure chest found in a cavern: you never quite know what you will get, and half the time you don’t like what you get.

Right out of the gates, I fell in love with Guild of Dungeoneering and its snarky sense of humour. It is more of a card collecting game than an RPG. You create your first character, naming him and giving him a class as he ventures into the dungeon to… well, die basically. Your little fellow will die often in this game, and a graveyard of ex-characters will quickly fill up with the bones of your fallen, but that’s used to comedic effect itself. The enemies range from the quirky to the completely ridiculous, and the game is filled with flavourful text bubbles and comments that had me grinning wildly at the beginning.

It actually reminded me of a simple tabletop card game called Boss Monster that I play with my older two kids. Instead of controlling your hero, you are tasked with creating a dungeon for the hero to traverse through. You are dealt cards at the start of each round and you have to place enemies and treasures in your character’s sight so he or she can run off and collect new goodies and battle enemies to earn experience. Experience is key, as one would expect. In theory, since you control the dungeon, you could try to just beeline it from start to finish, but your character will be under powered if you choose this tact and wind up suffering a quick horrible end when the boss encounter occurs. 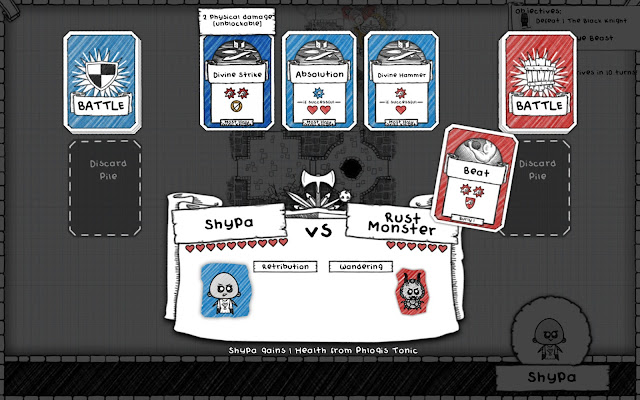 This use of the card system is Guild of Dungeoneering at its best. This same card system is used for combat, but the results are far less impressive there. I would go so far as to say combat is borderline boring most of the time, where you and the enemy play out randomly drawn cards to try and gain the upper hand. These cards generally consist of attack, magic or block, and while building up my deck helped to create a nice sense of progression, because there is a lot of fighting to work through, some additional variety would have really helped.

The biggest issue with relying on a card system like this is that it is so incredibly random. Guild of Dungeoneering is not terribly hard in and of itself (despite the almost complete lack of tutorial materials that drop you into the fray and make you learn through trial and error – something that rubs me the wrong way at times and often gives the impression that the player’s use of time is not all that important to the developer), but the luck of the draw will cause you frustration on many occasions. Often you’ll end up with a hand that is of almost no use, and no matter your strategy, you are going to lose. I understand the nature of card games can be that way, and I’ve been playing card games for years now, but in this instance the balance is off enough that it feels much more like you’re relying on luck than skill than a game of this nature should allow.

You have the opportunity to unlock plenty of new gear and items, and these items are the only bits of variety that help the combat system to avoid complete monotony. However, once your character dies in battle (and remember, he’ll do that a lot), you start off with a new level one character with nothing of note to his or her name. In other words, and and all progression will have been reset. None of your characters really matter and you never get attached to them due to their disposable nature, and that also has the side effect of killing the sense of progression that would have otherwise kept you playing onwards. 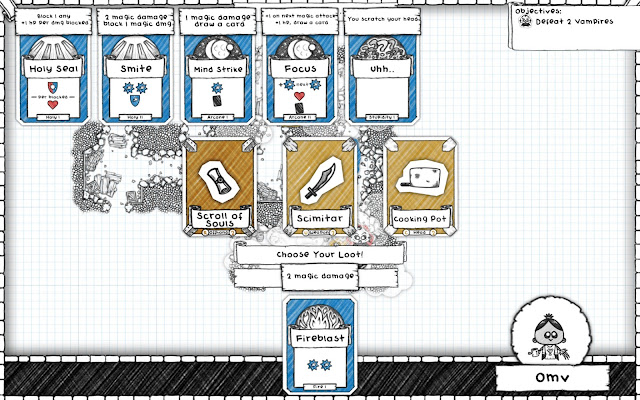 The aesthetic is simple, yet thoroughly entertaining. It looks like the kind of thing someone would draw while playing Dungeons & Dragons. This is not going to tax your computer or wow with any sort of technical proficiency, but at least the design is easy on the eyes and often times downright charming.

The biggest issue with Guild of Dungeoneering is that the gameplay never really evolves. Your deck of cards does grow and you’ll get new and better cards, but the overall experience in hour two really is not all that different from hour ten. The offering begins to feel light as nothing new comes to the table, almost giving the impression it should be or would be better served as a mobile game. The throwaway nature of the characters gives you very little to be invested in and by the end of the game I realised that I was more going through the motions than looking forward to what came next. At first Guild of Dungeoneering looked like a treasure chest to be plundered, but as I spent more time with the game, I came to the conclusion it was more akin to a Mimic and perhaps not worth the effort.