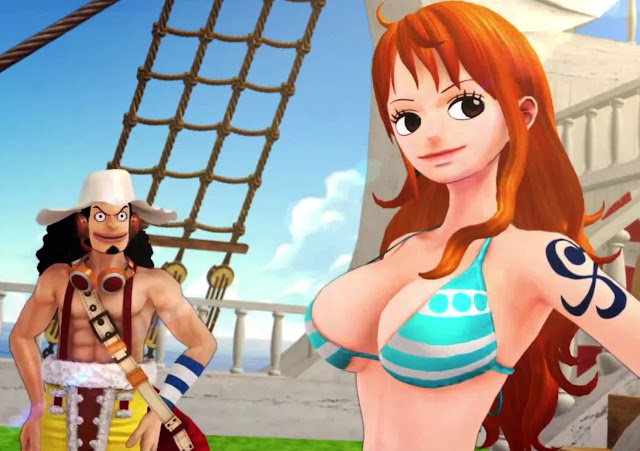 For fans of Luffy and his merry band of friends, this title represents the best One Piece experience to date. It may not be a monumental leap from the second Warriors tie-in in terms of mechanics and gameplay, but the development team seems to know what worked for it before, and they gave us a bigger, more refined experience in the process.

Related reading: You can also check out Matt’s review of the second One Piece: Pirate Warriors game here.

The Straw Hat Crew comes together again in a story that touches on the importance of friendship and what it means to sacrifice for those we really care about. This sort of narrative about the ties that bind us to one other should resonate with almost anyone, whether they have a working knowledge of the lengthy history of One Piece (a series that has been around nearly two decades in total) or not. Because these are themes that almost anyone can relate to, this makes the story of One Piece: Pirate Warriors 3 an easy one to relate to and enjoy, whether you are new to the series or simply returning for another go with Luffy and his pals.

Pirate Warriors 2 was a significant improvement over the original game, and while this iteration in the series is both bigger and better, it does not improve by the same leaps and bounds that its predecessor had. That being said, the transition to the PlayStation 4 hardware was a good one. The graphics themselves do not push the hardware. The visual style is incredibly bright and colourful, creating a world that is as welcoming as Luffy and his friends are. The actual art style itself is a bit of a mixed bag, as it has never been my favourite style. Little things like the eyes and stringy physiques are not my personal preference in anime, but the style is incredibly well represented within the game and should satisfy fans of the series. 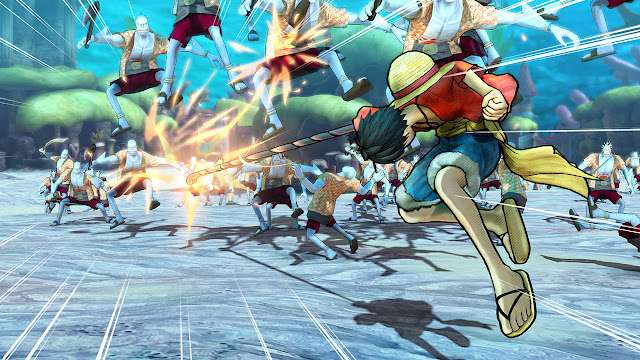 Where the PlayStation 4 gets to flex its muscle is in the huge number of enemies that can populate the screen. For anyone who has ever played a Warriors game, you know what you are getting into here. Luffy and his companions are almost godlike in their power, able to trounce hundreds of enemies without seeming to break a sweat. Because of the better processing found on the PlayStation 4, more enemies and less pop-in helps to keep you immersed while playing the game when compared to its PlayStation 3 predecessors.

There is a repetitiveness to the gameplay structure that will make Pirate Warriors 3 a game that is not for everyone. There are a good number of moves at your disposal, but that is window dressing for a combat system that is actually quite basic. A series of similar button presses are enough to wade through the tides of bodies until you reach the boss battles. Epic battles against large numbers of similar enemies does not in and of itself lend the game to variation in gameplay. Still, seeing combos of hundreds or thousands of slain opponents while building up to massive animated attacks between you and your team mates is quite rewarding. The action on the map can become a bit of a challenge when things like a new quest objective pops up, only to show up on an already busy-looking map. This can make it a challenge to isolate what is most urgent for characters to focus on next. This is par for the course with Warriors games, and doesn’t necessarily sit well with everyone, but it has become the standard for a reason – enough people do like it this way.

All of this fighting would risk becoming dreadfully dull eventually if it was not for the ability to level up the characters. There is a large collection of characters that comprise the cast, and while the RPG elements are very light, with some small stat increases that occur with every level, finding items and gaining levels kept me coming back. The boss battles are actually both quite entertaining and challenging. They stand in stark contrast to the hordes of no-name characters you mow through for the majority of the levels, and actually provide considerable challenges. The new unlocked characters also infuse the proceedings with new life every time, because they tend to handle quite differently from one another. 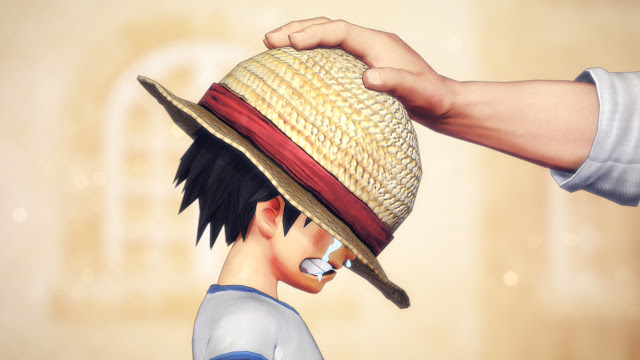 There are a handful of different modes, but by far the story one was my favourite. There are some lovely cutscenes and also lots of written text that help to tell the One Piece story. Obviously it is not completely comprehensive (again, the series has been around for a very long time), so all kinds of corners get cut along the way of retelling the One Piece story, but fans of the series will no doubt enjoy reliving some of the bigger moments in the series, while newcomers might feel somewhat lost at first but will likely come away with a perfectly serviceable knowledge of the series by the time they are done.

Stages are large, but often lack variety from one another. Thankfully there is almost always something going on, so I was generally too busy to worry about the similar nature of the various levels. Battles can be very long affairs – it is not infrequent to have a thirty minute battle taking place, and defeat is a bit disheartening when you have just invested twenty minutes or so into a stage. Outside of the story mode, the next most entertaining one is the new Dream Log mode. This is actually quite a nice addition as it gives you more unlock opportunities as you move about a grid taking on increasingly difficult challenges. Throughout these challenges, which have a large degree of randomness to them, objectives will change as well. This supplies a substantial amount of replay value to this mode.

Related reading: For an alternative to the Pirate Warriors games, consider One Piece: Unlimited World Red.

One Piece: Pirate Warriors 3 is a very complete package for action fans or just those who have an affinity for the source material. Between the various modes, the online options, the huge cast of unlockable and upgradeable characters, you will not lack for things to do. The gameplay itself feels readily familiar and accessible, though it’s not going to sell anyone who doesn’t already enjoy the Warriors formula. For me personally, the story was the highlight as it provides an excellent summation of the One Piece series as Luffy and his friends manage to overcome incredible odds and share some truly touching moments.

DDNet does Japan! Day #16: What to do when a typhoon comes knocking in Japan