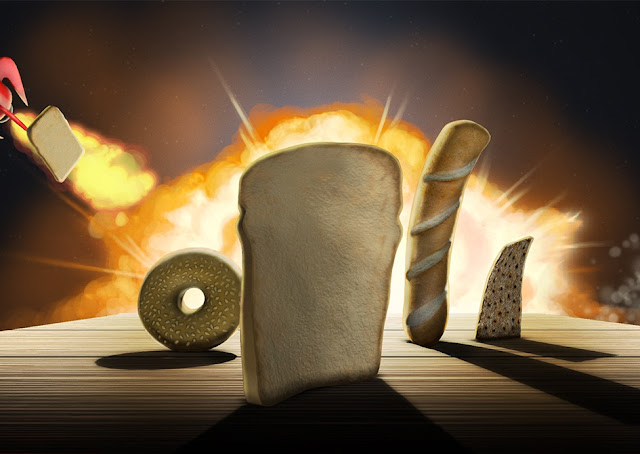 I Am Bread is a game I should have loved. As a none-too-subtle homage to Franz Kafka, and, specifically, his seminal work The Metamorphosis, this should have meant a game that I would devour and then ponder over as not just something delightfully weird, but something with a great deal of deeper meaning.

Related reading: An interview with the developer, Bossa Studios, from 2013.

The Metamorphosis, after all, is a deeply existentialist work designed from top to bottom to question the nature and purpose of humanity and life within it. Like the best existentialist works it’s got some serious thinking and even angst under its gleefully surreal edge, and it’s precisely this that I Am Bread lacks. Instead what we get is a poorly executed attempt at existentialist thought, coupled with a game that plays absolutely miserably on the iPad.

I Am Bread is broken up into levels in which players take control of a piece of bread, and have the goal of getting that bread toasted. This involves bouncing the piece of bread around a room, looking for something to stick it into or onto that is hot enough to toast it. The points of conflict are twofold; on the one hand you need to get the bread toasted quickly, or its quality will start to degrade. No one likes eating old bread, after all. The second challenge is to not let the bread come into contact with contaminants, such as the floor. If the bread falls to the floor, the three second rule kicks in and you’ve got to get the bread back to safety immediately or it will be rendered too foul to eat. 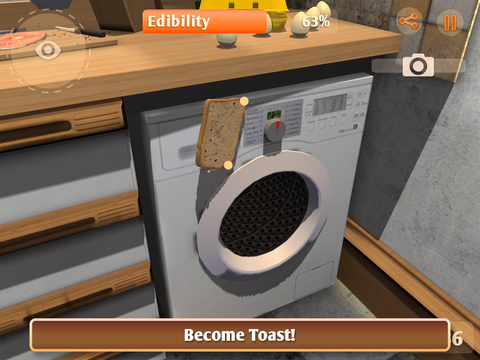 Luckily for you this bread is a limber fellow, and is able to stick onto walls, push chairs over, and do other such things to help him stay well away from the dirt. Unluckily for you he’s a mess to control on the iPad. The four different corners of the bread act as the hands and feet, but it quickly became irritating to try and scramble up walls and around obstacles when the touch-only inputs of the iPad screen were generally quite unresponsive. Further compounding this problem is a perception issue; at first the explanation of the mechanics are a little too obscure to really get into. With some persistence a sense of how to play effectively eventually clicks, and then I Am Bread becomes reasonably playable, but never is the bread precise enough for some of the precision movements that you’ll be asked to execute from time to time.

All of this I could have forgiven, mind you. The developer, Bossa Studios, regularly makes its games difficult or obscure to learn in order to make a point of it. Surgeon Simulator (which actually acts as a sequel for this game in Bossa’s weird little world), for example, was nearly impossible to play at times, but that was the point, and it incredibly effective in making that point.

But the nearly complete absence of context in I Am Bread is unforgivable, given the strength of the material that inspired the game. Kafka’s The Metamorphosis was an intense study in morality and the purpose of it when you consider that the universe is fundamentally absurd and incomprehensible (with morality being a human attempt to impose order and understanding over the universe). The idea that death renders everything in life fundamentally meaningless is also a point of intense debate and discussion among existentialists, and The Metamorphesis is a core text within that particular discussion. 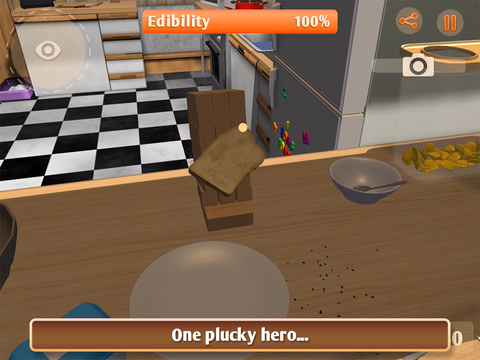 A brief snippet of text at the start of each level is meant to provide some context, but it’s far too brief to be really effective in creating a compelling discussion around existentialism. The gameplay of I Am Bread also tries to make something of a narrative point, but it is too clumsy to be particularly insightful.

Related reading: For an example of a game that engages with existentialism on a far more detailed level, check out Persona 4.

By this I mean that’s it’s a neat idea that in the role of a piece of bread – something to be consumed – there’s a certain sense of purposeless in that the goal of each level is to put yourself into a state where you’re even more attractive for consumption, only to realise that there’s absolutely no one around to do it. It’s the very definition of a futile pursuit, and there’s something of a commentary in there about the ultimate purposelessness that comes when we play any game. But there’s no real attempt to put forward a debate about this idea; in practice the intriguing ideas simply boils away under the surface without any real exploration.

And so, while the actual level design is interesting enough, and there’s a certain sense of reward in figuring out how to get your piece of bread toasted in each level, ultimately I found I Am Bread to be too dry and simple for what it promised. If you are going to create a game that is deliberately going to invite comparisons with a literature classic, then you really need to make sure that you’re also going to do that classic justice. All that I Am Bread has achieved is to be a mildly frustrating but mildly attractive game that will disappoint any Kafka fan that is baited into giving it a go based on its title.

DDNet does Japan! Day #21: A trip to Asakusa to cleanse the soul and eat melon pan